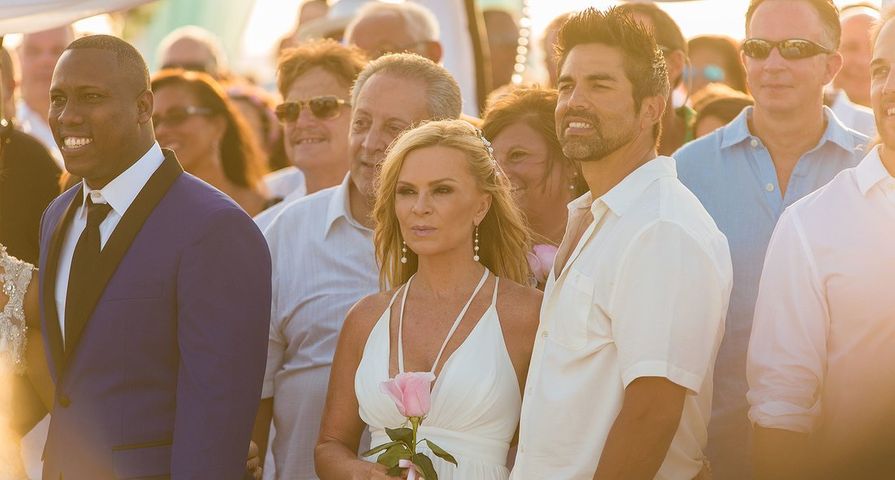 There are two things the women on Bravo’s Real Housewives love to do: brag about how amazing their life is and throw a great party. What better way to do both of these things than through an over-the-top vow renewal! We now know that just because a reality TV couple plans a vow renewal (on or off-screen), it doesn’t necessarily mean this couple is immune to divorce. We’ve compiled a list of 8 Real Housewives couples who renewed their vows — some are still together, but there are more than a few who’ve since divorced. Check it out:

This Real Housewives of Beverly Hills couples has one of the most solid relationships in the entire franchise, plus they’ve been married the longest! Lisa Vanderpump and Ken Todd celebrated their 30th wedding anniversary by renewing their vows during an episode of season 3 back in 2013. Not surprisingly, it was a lavish, over-the-top ceremony that took place in their beautiful backyard.

Unfortunately for these two, it seems like renewing their vows was the kiss of death for their relationship. From the moment she began appearing on The Real Housewives of Orange County back in season 9 their marriage has been on the rocks due to David’s infidelity. It seemed like things were on the upswing for these two when David planned a surprise vow renewal for Shannon back in 2016. The whole thing was incredibly touching and emotional for Shannon as they got to do it in front of all their friends and family. It all aired during an episode of the show in season 11, but only a year later at the season 12 reunion, Shannon announced she and David were getting divorced.

In March 2017, after six years of marriage, The Real Housewives of Atlanta star Kim Zolciak-Biermann announced that she and her husband Kroy Biermann were planning a “romantic, beautiful” vow renewal. A few months later on Mother’s Day, photos of the two dressed in wedding attire surfaced on their social media which hinted that they’d gone through with their renewal while on a family vacation in Turks and Caicos. Their wedding anniversary is November 11, 2011, but for their vow renewal, they celebrated another anniversary — the day they first met.

In August 2017, after only four years of marriage, RHOC star Tamra Judge and her husband, Eddie renewed their vows during a getaway in Aruba. After the ceremony, Tamra gushed to People about how happy she and her husband were about their renewal ceremony. “Aruba is simply beautiful. It meant everything for Eddie and I to be able to ‘renew our I Do’s’ in such a picturesque setting, in the company of our family. Cheers to a lifetime of love and adventure from the One happy island!” The two originally tied the knot in a televised special back in June 2013.

At the end of season 3 Ramona and Mario Singer decided to renew their vows for their 17th wedding anniversary during an episode of The Real Housewives of New York City. For a long time these two were a power couple on the show, but just like many others before them, their marriage eventually fell apart. Their marriage carried on steadily for a few seasons after their renewal, but during season 6 it was rumored that Mario had been unfaithful in their marriage. The whole thing dragged out in the press, but when Andy Cohen tried to address it during the season 6 reunion, Ramona vehemently denied it. We later found out this was because she’d decided to try and reconcile with Mario, only for her to find him once again with his mistress which led her to end it for good. Their divorce was finalized in August 2014.

Vicki and Donn Gunvalson knew they had to do something to save their marriage after watching themselves bicker non-stop on The Real Housewives of Orange County. These two had seemingly lost their spark as Vicki continued to dive deeper and deeper into her career. Vicki extended an olive branch to Donn by planning a vow renewal while on vacation in 2009. Unfortunately, the sentimental thought only lasted as long as their trip and the marriage continued to suffer once they returned home. By the next season in 2010 their marriage had completely fallen apart and the two eventually divorced.

This was hands down the most over-the-top vow renewals we’d ever seen on the Real Housewives, and that says a lot! The Real Housewives of Toronto star Ann Kaplan Mulholland was feeling extra sentimental about her husband after his recent health scare and many tragic losses in their lives, so on his birthday she proposed to him and asked him to marry her, again. This was their second vow renewal. They’d renewed their vows on their 10th anniversary, and again on the 15th.

The Real Housewives of Atlanta stars Peter Thomas and Cynthia Bailey are another reality TV couple that fell victim to a divorce following a vow renewal. They first began appearing on the show in season 3, and it seemed from the beginning Cynthia’s family was not supportive of the relationship. They kept hiding the marriage certificate to try and stop the wedding. Red flag! Two seasons later after they successfully tied the knot, they traveled to Anguilla on a couple’s trip where Peter surprised Cynthia with a vow renewal. This was extra special for them because it was where she originally wanted to get married. The whole thing was blissful and happy, until they got home and the honeymoon wore off. In season 9 Cynthia finally admitted their marriage was not working.