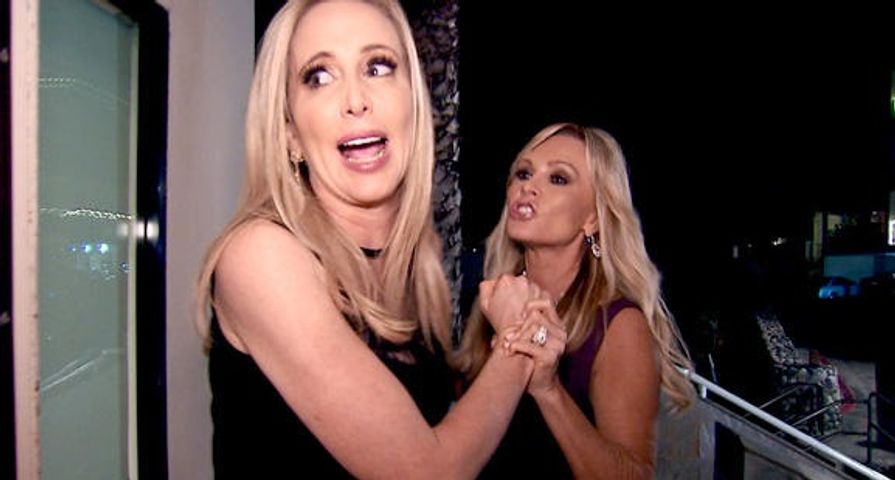 Bravo’s reality series the Real Housewives is all about showcasing the professional and personal lives of women in America (and internationally), especially those whose lifestyle is luxurious. More recently, it’s become clear each season centers around some form of drama and as many viewers would know, for whatever reason most of this drama goes down at their dinner parties. Sometimes it’s entertaining, but other times it’s just downright painful to watch! Here are 15 of the most dramatic dinner parties in Real Housewives history!

In 2015 during season 7 of The Real Housewives of Atlanta, the ladies go to dinner at a Brazilian steakhouse. During dinner, Cynthia decided to bring up rumors she and the other girls had heard that insinuated Phaedra had a new man in her life named “Mr. Chocolate.” It’s safe to say Phaedra didn’t take the conversation lightly and flew off the handle in her own defense.

Poor Dorinda. It seems like every time she tries to host a nice holiday dinner in the Berkshires it goes up in smoke. The worst dinner party she hosted there was no doubt in season 8 when LuAnn ended up getting attacked by Bethenny, Carole, and Ramona! While LuAnn is far from perfect, nobody deserves to be treated that way, so it was uncomfortable to watch. Bethenny definitely laid into her with a number of insults, many of which were unnecessarily harsh. It seemed like Bethenny was having a bad year and decided to take it out on LuAnn. Kudos to LuAnn for handling it like a champ. Their behavior was so bad that poor Dorinda had a meltdown of her own (we don’t blame her) and said her now hilariously infamous line, “I cooked, I decorated, I made it nice!”

Real Housewives Couples Who Divorced After Appearing On The Show

The title of this episode speaks for itself. This was not only one of the worst Real Housewives of Beverly Hills dinner parties, but it was also arguably one of the worst in the entire franchise! Camille threw a dinner party to help the ladies make amends, but in addition to the Housewives ladies, she invited a few surprise guests including the now infamous Allison Dubois. In addition to being the real-life inspiration behind the CBS’ show Medium, Dubois came across as someone who took pleasure in making nasty comments about other people, specifically Kyle Richards.

This particular moment is one of the most referenced Real Housewives moments and has followed Teresa Giudice ever since she began appearing on the show. In the season finale, Teresa invites the Manzos, Lauritas, and the Stabus to join her family for dinner, but things took a turn for the worse when Danielle places the book Cop Without A Badge on the dinner table. An argument ensues between all the women which lead Teresa to scream a slew of names at Danielle before flipping the entire dinner table. These two have since made amends, but back in the day, they couldn’t even be in the same room together.

Tamra Judge and Gretchen and Rossi have always had a tumultuous relationship with many ups and downs, mostly downs. The minute Gretchen joined the RHOC in season 4, Tamra seemed to make it her mission to destroy her co-star. One of her meanest moments was when she hosted a tequila tasting party and vowed to Vicki Gunvalson that she’s going to get Gretchen “naked wasted” to humiliate her. Well, her plan worked! Gretchen made a fool of herself as she got visibly drunk and even snuck off with Tamra’s son Ryan at one point during the night!

Lisa Rinna is usually the one cracking jokes and making us laugh, but during a trip to Amsterdam in season 5 of RHOBH, she totally lost it. Her long-standing feud with Kim Richards hit its lowest point when Kim insinuated that Lisa Rinna’s husband, Harry Hamlin was cheating on her. Unsurprisingly, Lisa Rinna got upset, but the level of her anger was shocking and a little scary. She stood up from her table, smashed a wine glass and screamed, “Never go after my husband!” Safe to say that put a quick end to their dinner!

It finally seemed like Jacqueline and Teresa were going to be able to mend their relationship in season 7 of RHONJ, but it didn’t last long. The girls headed out on a trip to Vermont where Jacqueline got in a fight with Teresa’s friend Robyn. After the fight, Siggy and Dolores decided it would be a good idea to get Robyn to leave the trip, but when Teresa caught wind of it, she became upset. When they all meet for dinner later, Teresa asked Jacqueline why she asked Robyn to leave, Jacqueline responded and said she didn’t. It’s pretty clear Teresa is siding with her new friend Robyn over Jacqueline which caused Jacquline to see red. She began spewing a slew of insults at Teresa calling her a “criminal” and a “table-flipping b-tch,” and then turned her sights on Melissa. The whole thing went from zero to one hundred really quickly.

Not only were the viewers uncomfortable watching these episodes, but Bethenny, Ramona, Sonja and Alex all voiced how concerned they were while filming it. Former RHONY cast member Kelly Bensimon has always marched to the beat of her own drum, but she went full blown cuckoo while on a trip to the Virgin Islands (now deemed Scary Island). Bethenny cooked the ladies a beautiful dinner on one of the last nights of their vacation and not only did Kelly speak out about how much she disliked the dinner, but she also proceeded to tell them how she thought Bethenny was spreading lies about her in the press and that she was out to kill her! As much as Kelly would like to deny anything was wrong on this trip, she totally lost it. She began talking gibberish, acted totally irrational, and provoked Bethenny to the point where she lost it on her and told her to “go to sleeeeep!”

Former Housewife Lizzie Rosvek wanted to host an “elegant dinner party,” but sadly it was anything but that. Despite all of their best efforts, the night took a turn for the worse with the ladies drama. Things were running smoothly, until Shannon confronted Tamra about something she’d supposedly said. According to Shannon, Tamra had told her that Terry Dubrow had said, “Let’s take the Beadors down.” Tamra denied this was ever said and that seemed to be the end of it — until later in the evening, Tamra stirred the pot by asking Heather and Terry if they’d spoken to Shannon and David, and brought up the alleged comment. Of course, Shannon and David are sitting close by and overhear the conversation, so they chimed in. The whole thing turned into a full blown argument between both couples which eventually led to Shannon storming out.

6. Don’t Sing For Your Supper

We must admit, we miss the dynamic RHOBH duo Yolanda and David Foster. This now divorced couple were pretty great together and hosted even better dinner parties. Their guests could always count on some kind of musical treat which was often David performing on the piano after dinner. In season 3, Yolanda invited all the women over for dinner which seemed to go well until former cast member Taylor Armstrong got drunk and began crying after Yolanda scolded her for singing along as David played the piano. Note to self: never sing while David Foster is performing.

Tamra Judge has never been one to sugarcoat how she’s feeling or fake a friendship in order to get through a party drama-free, and this was never more evident than at her gym opening dinner. Alexis Bellino is no longer a regular cast member on RHOC and she was never really a favorite among viewers or her fellow cast members, but during her time on the show she definitely feuded with Tamra the most. In season 8 Vicki brings Alexis as her date to Tamra’s CUT Fitness opening and things don’t go well, to say the least. It doesn’t take long for them to end up fighting, mainly due to Tamra’s unwelcome attitude and confrontation. Once Tamra’s had enough, she kicked Alexis out of the party!

In season 7’s tenth episode NeNe Leakes and Claudia get into a heated argument while on vacation with all the other ladies in Puerto Rico. There was so much tension at this dinner table, we’re not even quite sure why all these women were on vacation together in the first place! Finally after a bunch of whispering back and forth about how each group of women is more rude than the next, NeNe and Claudia eventually just started spewing insults back and forth at one another!

We definitely feel bad for former RHONY cast member Heather Thomson because she did have good intentions, but she also wasn’t picking up on the fact that Bethenny Frankel didn’t want to have too much attention on her. We could all see it, so we’re not sure how Heather missed that social cue! During a dinner party at Dorinda’s house in the Berkshires, Bethenny lost it on Heather and eventually broke down crying after Heather tried to get her to eat some meatballs. It was clear that Heather’s mother-hen ways weren’t going to work on Bethenny.

It’s safe to say the Giudice’s have been to a lot of bad dinner parties. They’ve endured nasty arguments, table flipping, and even seen people be chased out of events (hint: Danielle). One of the worst was in season 4 when the gang headed to Napa Valley and Joe Giudice was caught talking to a mystery caller on. During the phone call, he calls Teresa “my b-tch wife” and the c-word. It’s unclear who he’s talking to, but it’s definitely not a good look and it’s clear the phone call was meant to be had in private, but Joe forgot he was mic’d, so the whole thing was recorded and aired on national television. It was definitely cringe-worthy. Ever since this episode aired, this couple has been plagued with rumors of infidelity.

10 Real Housewives Who Have Committed Crimes

Tamra Judge and Vicki Gunvalson were once the most popular BFFs in the Real Housewives franchise, but recently they are more like two of the biggest enemies. The source of their fighting — a man named Brooks. Back in season 7, when Vicki was dating Brooks, the women were all gathered at a dinner party hosted by former RHOC cast member Heather Dubrow. Vicki, Brooks, Tamra, Eddie and Gretchen were all sitting at a table together and somehow Tamra and Vicki’s friendship is brought up which causes Tamra to go off on Brooks. She accuses him of telling Vicki what she thinks which turns into an explosive fight between Vicki and Tamra.