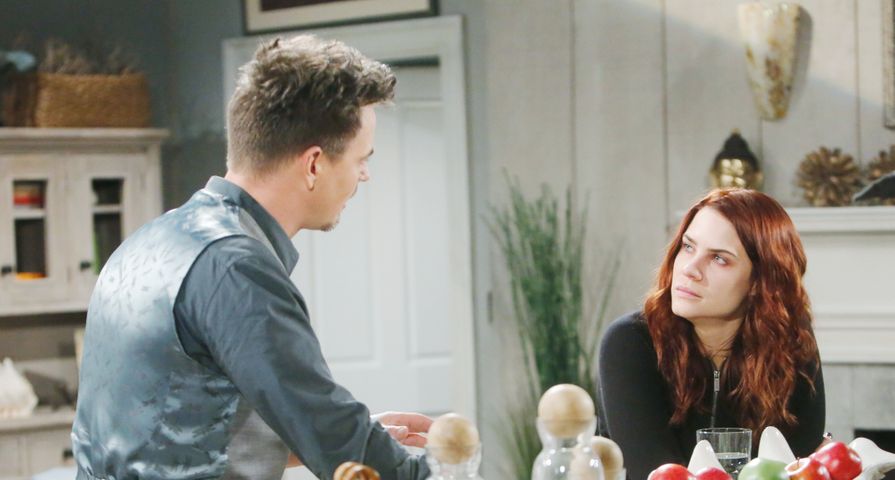 Bold And The Beautiful (B&B) spoilers tease that Sally may second guess herself and begin to regret her actions. Also, Wyatt and Bill will have an honest discussion about the women they’ve hurt. Plus, an argument between Flo and Sally takes a dark turn. Read on for more B&B spoilers for April 20 to May 1, 2010.

As of Thursday, April 23, B&B will have run out of episodes, but producers have a plan. On Friday, April 24, B&B will air a Monte Carlo-themed episode that will show Forrester Creations and Spectra Fashions facing off for a fashion showdown that will benefit charity. The following week, B&B will feature episodes that were filmed on location in Monte Carlo from 2013 to 2017, as week as two documentary-style episodes that will include behind the scenes details of these shoots.

12. Liam And Steffy Play Catch Up

Spoilers tease Liam will pay Steffy and Kelly a visit and the two will catch up on what’s been going on in their lives. A Soap Opera Digest (SOD) spoiler photo shows Steffy and Liam on the couch at her cliff house talking. But now that Liam has remarried Hope, will the large portrait of Steam still be prominently displayed on her living room wall?

Now that Ridge has awoken back in Los Angeles with Brooke, after his wild night in Vegas with Shauna, the Forrester designer will have to decide where his heart really lies. Does he want to forgive Brooke, or run back to Vegas to be with Shauna, a woman who makes him happy?

Will Ridge’s crazy night in Vegas come back to haunt him? The consequences of drinking far too much and not remembering anything could be too much for Ridge to comprehend. Some spoilers tease that he got a lot accomplished that evening, including filing the papers to end his marriage to Brooke. But did he do anything else he may regret later?

Brooke will continue to seek forgiveness from Ridge for crossing the line with Bill. But no matter how many times she tries to explain herself to her husband, it’ll be like talking to a brick wall. He doesn’t want to hear it anymore. In Ridge’s mind, he’s already moved on with Shauna.

Despite lacking her husband’s backing these days, Brooke will have people around her who will continue to support and encourage her. Hope, Donna and Eric will tell her to fight for the man she loves. And Donna will also continue to attempt to persuade Katie to forgive their sister for kissing Bill.

Bill and Katie will have a sincere discussion about their relationship. Katie still loves him, but because he’s cheated on her with Brooke so many times, she’s afraid of risking heart again. Bill will tell her he’s not interested in Brooke, and he knows he belongs with her. Will Katie give him another chance?

Wyatt will be filled with guilt and will struggle with asking Sally to move out. He will also have a frank conversation about it with Katie and Quinn. He will tell his mother and Katie that at least the two women aren’t constantly arguing. And Quinn will agree that it’s a good thing Flo and Sally are getting along.

Rumor has it, Bill will advise Wyatt about his responsibilities to Flo and Sally. Wyatt is torn between the two women. He wants to continue to support Sally, but also doesn’t want to hurt Flo by letting Sally live at his beach house. Wyatt will ask his father what he thinks he should do.

Sally is beginning to second guess her plan and is already having regrets. Wyatt hasn’t suddenly come to the realization that he’s madly in love with her. Her feelings toward her ex have also started to change. Sally still loves him but knows he’s not willing to give up Flo. Her focus seems to be more on winning and she’ll begin to wonder if all her scheming has been worth it.

Despite her misgivings, Sally will forge ahead with her ploy to win Wyatt back. Deep down, she knows there will be no happy ending to the path she’s on. In fact, it’s could come back to bite her. She’s got her eyes on the prize and that’s all that matters. Once she’s won, Sally believes she can then deal with the fallout from her actions.

Flo now knows Sally was faking her fatal illness and will confront her about it. She’ll call her a fraud and inform her that she’s going to tell Wyatt all about her despicable scheme. As the two rivals are in the middle of their heated argument, rumor has it, Dr. Penny Escobar will arrive at Wyatt’s beach house.

Unfortunately for Sally, spoilers tease Penny’s on-the-spot, desperate decision will change everything, and Sally will be stunned by the dark turn her plot has taken. The doctor will knock Flo out and she’ll be lying unconscious on the floor. “It honestly throws a whole wrench in her plans,” Courtney Hope, who plays Sally, told SOD. “Now things have escalated to a criminal level and that worries and upsets Sally.” But what will the two women do with Flo? Keep watching B&B to find out!