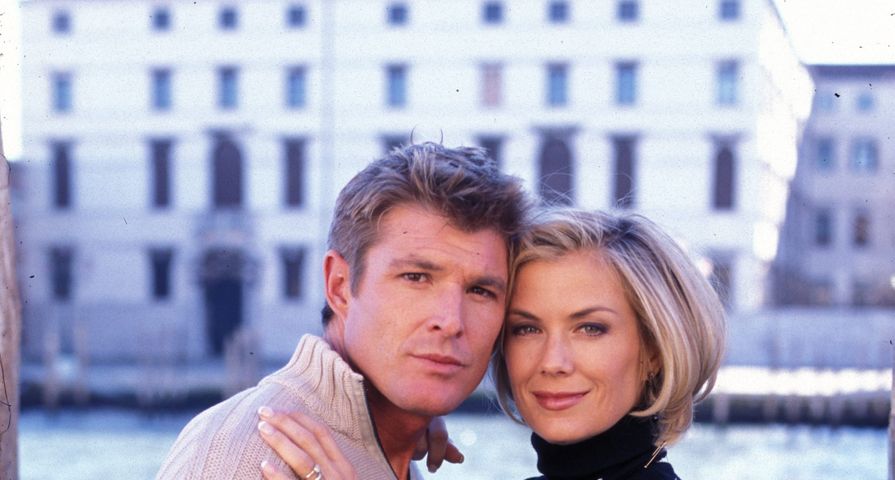 Since B&B first aired in 1987, many of its iconic couples have given fans countless reasons to cheer them on. Some pairings made us believe that love was real, even if it was just for a few fleeting moments. Other couples stuck together through the best of times and the worst of times. From the fiery love affairs of Steam and Wally to the enduring legacies of Bridge and Lope, here are 12 B&B iconic couples

When Eric and Quinn first got together, they both thought of their romance as a secretive affair. Neither of them took it seriously, until they developed feelings for each other. This iconic couple had Eric’s entire family against them, but they still made it work. Even when Quinn cheated on Eric by sharing some stolen kisses with his son Ridge, he forgave her, and they stuck together. Their relationship remains solid to this day.

Steffy and Liam have been married three times and their relationship has weathered countless manipulations and infidelities on both their parts. This iconic couple share a fun, adventurous bond and they seemed to beat the odds when they remarried for the last time in 2017. If it hadn’t been for Hope’s return to the B&B canvas in early 2018, many Steam fans believe this iconic couple would still be together today.

Karen and Dani were the first same-sex couple on B&B, introduced in 2012. And they had their share of drama on the sudser, just like any other pairing. Joanna Johnson, who portrayed Karen, said she wouldn’t have had it any other way. “We shouldn’t feel pressure to make Karen and Dani some paragon of virtue,” she told TV Guide in a 2012 interview. “I think the gay community would love to see us portrayed just like any straight couple, flaws and faults and all.” Karen and Dani are offscreen these days, but this iconic couple is still together and going strong.

When this iconic couple first encountered each other, it was love at first sight. They faced many challenges, including Zende sleeping with Nicole’s half sister Sasha and Nicole agreeing to be a surrogate mother for her sister. But, in the end, even with the odds seemingly stacked against them, their love conquered all, and this iconic couple is still together, offscreen in Paris.

Nick was the love of Bridget’s life. He had dated her mother first, but when Brooke inevitably returned to Ridge, Bridget fell hard for Nick and he also fell for her. This iconic couple was married shortly after Bridget learned she was pregnant. But when she tragically lost the baby they split up. Nick and Bridget did reunite several times afterward, but their reunions just didn’t last. Although they loved each other very much, this iconic couple never made it.

This iconic couple was the definition of star-crossed lovers in the 1990s. The Forrester and Spectra families had despised each other for years. And the fact that Stephanie Forrester was Thorne’s mother and Sally Spectra was Macy’s mother made their romance that much more tantalizing. When they first fell in love, they were unaware of each other’s last names and their family connections. But Thorne and Macy’s love conquered their family’s objections, and they were married in 1990. This iconic couple was on and off over the years, until Macy passed away in 2003.

Brooke and Ridge may have been one of the most enduring couples on B&B, but Brooke and Thorne’s love story was also extraordinary. Heartbroken after having been dumped by Ridge, Brooke sought comfort from Thorne. They had always been good friends, but Brooke began to develop feelings for him, and Thorne returned the sentiments. This iconic couple only spent a few years together but seemed to love a lifetime’s worth. Even Thorne’s mother Stephanie, who was against their relationship from the start, eventually came around and walked Brooke down the aisle when she married Thorne. However, their marriage was doomed to fail, as Brooke couldn’t shake her love for Ridge and Thorne knew it.

Taylor and Ridge were considered a B&B super couple in the 1990s. They fell in love after Ridge’s first wife Caroline passed away from leukemia. But Brooke always seemed to get in the way of their romance. Taylor remains in love with Ridge to this day and even kissed him in March 2019. But he was still married to Brooke and she realized, once again, that she didn’t stand a chance. Many Tridge fans still hold out hope that this iconic couple will eventually find their way back to each other.

Sally showing up at the Bikini Bar, on the same night Wyatt was there getting over his breakup with Katie, seemed like kismet for this iconic couple. She had just left New York, heartbroken because Thomas had dumped her. Sally had no friends in town and nowhere to live. Wyatt invited her to stay at his place for the night and she never left. She’s currently living with him, but only because she’s faking a fatal illness to win him back. Will Sally succeed and will this iconic couple reunite for real?

Bridge has certainly had its ups and downs and these two are currently in a downward spiral, but fans continue to see them as one of the show’s most iconic couples. They’ve been in love for more than 30 years and even when they’re married to other people, Brooke and Ridge tend to yearn for each other. Brooke has always believed Ridge is her destiny, but Ridge recently told Brooke she was the love of his life and his curse. Although their relationship recently hit the skids, viewers know these two aren’t over forever.

Hope and Liam have been one of B&B’s most iconic and enduring couples since they first fell in love in 2010. Their love story is one for the ages and despite others trying to tear them apart, Lope has always found their way back to each other. Hope and Liam recently remarried, in an intimate ceremony attended by only Douglas and baby Beth, recommitting to each other, much to the delight of Lope fans.

Stephanie and Eric were the matriarch and patriarch of the Forrester family when B&B first hit the airwaves in 1987. They remain one of the most iconic couples on any sudser and their romance stood the test of time. Despite the many problems they faced in their relationship over the years, including Eric’s infidelities and Stephanie’s obsessive, controlling ways, they always got back together. This iconic couple would likely still be married to this day if Stephanie hadn’t passed away from cancer in 2012.