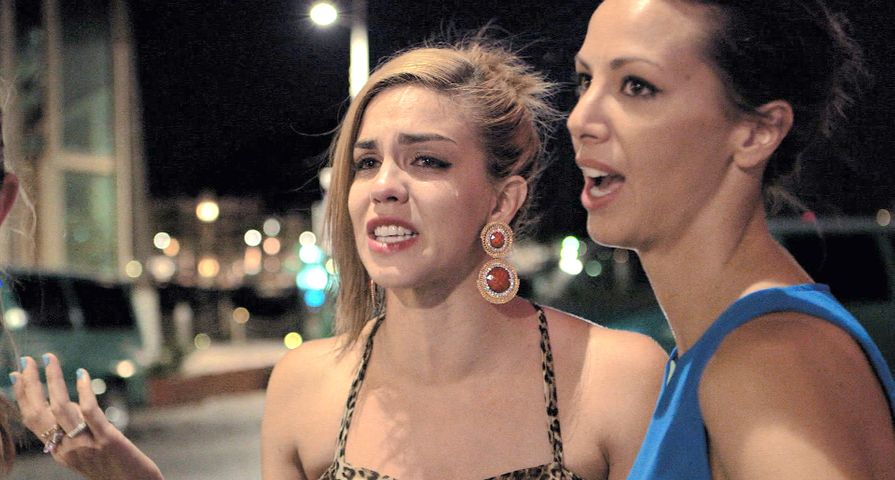 Vanderpump Rules is one of those reality shows that is packed with drama. Season after season, fans have been privy to some of the most epic fights and craziest cheating scandals to have ever rocked the reality TV world. The show is currently in its sixth season and things are more dramatic than ever, which is why we’re counting down the 13 craziest moments yet:

Tom Schwartz and Katie had a much more solid relationship than their co-star couples, so when he admitted to making out with another girl during season three, fans were really disappointed in him (and so was Katie). It’s hard to forget the look on Katie’s face when he told her the rumor was true. Even more shocking was when he admitted to making out with a different girl later on that season.

12. Scheana and Shay Ending Their Marriage

Jax predicted that Scheana and Shay’s marriage wouldn’t last and at the end of season five his prediction came true. Even though their breakup wasn’t as dramatic as some of their co-stars, it was still a crazy moment as it involved accusations about Shay’s sobriety. Although he denied that he cleaned out their bank account to buy drugs, watching Scheana tell him that their marriage was over and that he needed to get his stuff and go was just surreal. It really seemed like she was in it for the long haul, but during that moment, it became clear that there was probably more going on than we saw.

Season five wasn’t particularly dramatic – until Tom Schwartz and Katie’s joint bachelor/bachelorette party. The party had disaster written all over it. There was a ton of drinking and the guys were dressed in drag and then there was the epic fight that erupted between Kristen and Schwartz that ended up expanding to include Kristen’s boyfriend Carter, Tom Sandoval and Katie. The big issue was that the girls believed that Schwartz had sex with a girl in Vegas (he claims they made out) and believed that he needed to come clean about it. Schwartz kept denying it and at one point even announced that he can’t marry her, calling her a nightmare during the first three years of their relationship!

10. Kristen Getting Fired from SUR

During season two and season three, Kristen was on a downward spiral, yet she somehow managed to always keep her job at SUR. That changed, however, after she brought Miami girl to SUR to confront Tom. After verbally assaulting her manager, Diana, Lisa Vanderpump drew the line. She gave Kristen an opportunity to apologize – and Kristen refused – and then sacked her right then and there!

During season two, it really seemed as though Tom Sandoval and Kristen had the most dramatic relationship on the show, but for a hot second when the crew was in Cabo, Katie and Tom Schwartz showed us that they could be just as dramatic. The two proceeded to get into an epic fight after Schwartz gave Scheana a shot at the club they were at, which ended with him pouring his drink on Katie. Not a wise move!

It was obvious very early on in season three that Kristen and James were going to have a really dramatic relationship. Kristen was really hung up on Tom and he was getting tired of it. However, no one really expected her to punch James in the face at Scheana’s wedding. To be fair, James was being a jerk, but physical violence wasn’t the right response.

7. Jax Admitting to Cheating on Brittany

Jax had always been a cheater, but it really seemed like he had turned a new leaf when he started dating Brittany. During the season six premiere, it came out that Jax had cheated on her with a fellow SURver named Faith and, although he initially kept denying it, he did end up admitting it in the following episode, which took everyone by surprise. He usually denies this sort of thing for months and then admits it, but not this time.

6.  Jax and Laura Leigh’s Break Up

When Jax hooked up with Laura Leigh following his breakup with Stassi, everyone (except Laura Leigh) knew that he was just using her. So, their breakup wasn’t that shocking – it was just crazy. Laura Leigh confronted him at work in front of customers, going off on him for having unprotected sex with her but not even having the decency to end the relationship by having a conversation with her. Poor Laura Leigh. She totally got Jaxed!

During season three, Kristen accused Tom Sandoval of cheating on Ariana with a woman in Miami named Annemarie Kunkel. Things got especially dramatic when Kristen invited Annemarie to come to L.A. so that she could confront Sandoval at SUR while he was working. When she arrived at SUR, Tom acknowledged her but then ran out the back door and had Ariana do same. Annemarie played the long game though. When Sandoval and Ariana got back to SUR after running away, she finally confronted him and a screaming match ensued and she was then kicked out.

4. The Fight in Vegas on Stassi’s Birthday

Stassi’s birthdays always involve some drama, but her birthday during season one was probably the craziest because of the epic fight that broke out between Jax (who had been disinvited) and Frank. Even before their physical fight happened, Stassi had thrown a drink at Tom Schwartz and Schwartz had in turn dumped a beer on her. When the guys went out to fight, for some reason Jax threw off his sweater and ran at Frank topless. It was almost funny, but seeing Stassi riding home in a limo alone after everything went down was kind of sad.

Tom Sandoval and James getting into a fight at Scheana’s birthday party during the season three premiere was pretty intense. While James has always been a bit of a loose cannon, Sandoval wasn’t, so when he threw the first punch at James, it was pretty shocking. Even more shocking was when Kristen and Tom Schwartz got involved. Glasses went flying and Scheana ended up in the emergency room after a piece of broken glass sliced her foot open.

After Kristen and Jax had both fessed up to the two hookups they had behind Sandoval’s back, he was naturally really upset; however, no one expected him to physically attack Jax at Scheana’s engagement party for not showing any remorse for his actions. Although Jax’s face looked terrible after Tom punched him, the moment made for great TV. Even Scheana’s response, which was to cry about her tooth even though she hadn’t been hurt, just added to the general insanity.

A good part of season two was devoted to the Kristen/Jax cheating scandal. Although both initially denied it, after Jax confessed and helped Stassi out Kristen, Kristen kept denying it – which is why Stassi backhanded her and then called her a whore. It was probably one of the craziest moments in season two and it almost led to a physical fight between Stassi and Kristen.