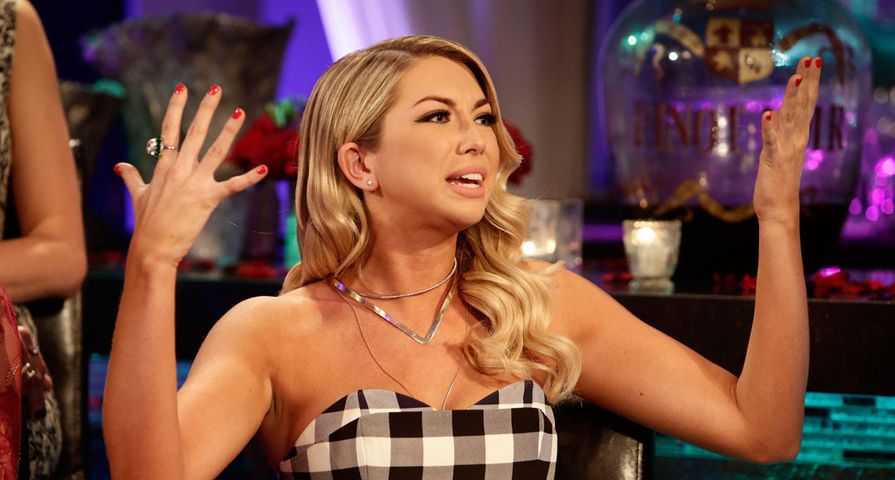 Bravo’s Vanderpump Rules is a spin off series created for Lisa Vanderpump from The Real Housewives of Beverly Hills. The show follows various servers who work for Lisa at her restaurant SUR and all the drama that ensues within their relationships, friendships and careers. The show is now onto it’s fourth season and the drama is never ending. This show is unlike any others because it lets viewers into not only into the world of the restaurant business, but also young adults who are living in Beverly Hills, while being reality stars trying to build a career in the limelight. Like most reality series, there’s a ton of drama which leads to a lot of scandal! This list takes a look at some of the biggest and most shocking scandals from Vanderpump Rules:

Vanderpump stars, James Kennedy and Lala Kent were invited onto Andy Cohen’s talk show called Watch What Happens Live, but the two ended up being scolded by Andy during the interview. The usually calm and understanding host got completely fed up when Lala and James would not stop cursing throughout the entire interview causing entire chunks of their conversation being bleeped out. He threw his hands up in the air and told the guests, “You’re driving me nuts. I swear to God. Is there any way you can stop swearing?” After the interview Andy said the two wouldn’t be invited back: “It was just gross. They didn’t stop cursing, and I was really irritated. The viewers hated it. They were cursing so much, whoever our censor is, they’re very liberal and every time you say a curse word, they block out the sentence before [and after]….so the whole episode was on mute. It just left a really bad taste in my mouth.” Yikes. Lala did appear again on the show after she hashed out her grievances with Andy and apologized for getting too sloppy on his talk show.

Last season viewers found out that Vanderpump Rules star Scheana Marie and her newlywed husband Mike Shay were already experiencing marital problems due to his problems with substance abuse. Looks like the fairy tale ending didn’t last long! In an episode of the show she shared with viewers that she began noticing his problem when he started drinking a lot more and would mix prescription drugs with alcohol, sometimes taking as many as five pills a day. She ended up staging an intervention for him while filming and began making him take at home drug tests. After dealing with the backlash of this episode, despite the fact that it air only a couple months, ago it actually occurred almost a year before. Scheana has since said that her husband is now doing much better.

In season 3 of Vanderpump Rules, another cheating rumor surfaced involving Tom Sandoval, Kristen Doute and Tom’s new girlfriend Ariana Madix. Rumors began to spread that Tom had cheated on Ariana during a guys trip to Miami. The mystery woman is the infamous Annemarie Kunkel. It was incredibly odd that Kristen was so obsessed with revealing this hook up, especially since she was no longer dating Tom, but if she couldn’t have him, no one could! Things got heated when Kristen ended up contacting Kunkel on social media and inviting her SUR Lounge while Ariana and Tom were working. Kunkel had expressed that she wanted to confront Tom, who has denied that he ever slept with her. In the end, the whole thing cost Kristen her job at SUR because of the unnecessary drama, and for now, Annemarie is out of the picture, but it became pretty clear when Tom and Ariana ran out the back door of the restaurant when she showed up that something must have happened between the two.

Apparently, a few years ago one of Stassi’s ex-boyfriends who worked at SUR tried to sell a private video that she had made for him. Lisa admits in the new season that she paid him off to keep quiet and to restrain him from going public with the video. It came out last season, that the video was one again circulating and some cast members had seen the video. Stassi said about the incident: “Take the most private moment you could ever have, and then have people looking at it and shopping it around. I never wanted anyone to know about it, but that was the reason I felt a certain way about a lot of them and it looked weird on camera because I couldn’t justify why I was hating on them.”

In the finale episode of season 3, Kristen Doute finally broke down and admitted to sleeping with Jax Taylor while she was dating his best friend, Tom Sandoval. It was a heated episode that raised a lot of pending questions, especially for Jax’s former girlfriend Stassi Schroeder who was also friends with Kristen. This mess was a tangled web of former friendships and relationships. The whole ordeal led to the end of some close friendships and Jax has opened up about their hook up stating that there was no romantic connection, it was simply about making one another feel better in that moment. At the time Kristen was fighting a lot with Tom and Jax was wrapped up in his drama with Stassi.

Jax Taylor and Tom Sandoval got in a vicious brawl in the middle of a co-workers party after it was revealed that Jax slept with Kristen, Tom’s ex-girlfriend, while he was with her. Tom who is a former wrestler, dominated the fight leaving Jax badly hurt and bleeding from the face. Tom has since stated that their friendship is beyond repair because he can never forgive Jax, especially since he never apologized for betraying his best friend.

This past summer Jax Taylor was arrested in Honolulu, Hawaii, for felony theft after he was caught stealing a pair of sunglasses. He took a pair of sunglasses worth $300 from a local store and was later charged with theft in the second degree and entered a no-contest plea. Viewers were able to see the whole thing play out in the most recent season. After being arrested, him and girlfriend Brittany Cartwright had to come up with $11,000 for bail before flying back to L.A. In an interview with The Daily Dish, Jax said: “Obviously I feel horrible about it. I am human. I made a mistake. I apologized to everybody. It’s cost me a lot of money and I just kind of went into the mentality where nobody can touch me.” He later explained that it was a good, humbling experience for him because prior to the incident he thought of himself as untouchable with a big ego — he needed to be knocked down a bit. Mission accomplished Jax!