Home » Entertainment » TV » Cast Of My So-Called Life: Where Are They Now? 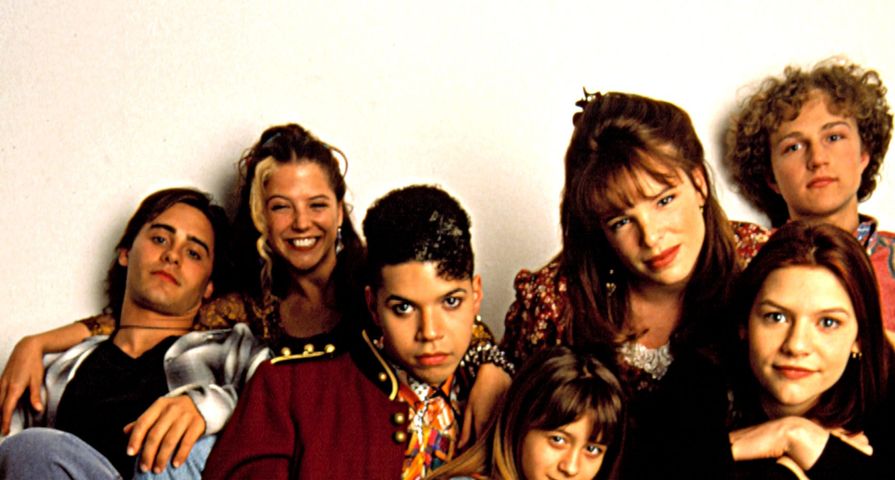 It was… like… the greatest show to ever be canceled after a single season. My So-Called Life was lauded by critics, and fell through the cracks of the populous. Sadly, people were engrossed with something in 1994 and 1995 that prevented them from really digging into the show–or perhaps, the people with the ratings boxes were afraid of something hitting on too much… like… so-called realness. Was it the O.J. trial? Whatever the case, the show stands to the test of time, and the fans are loyal! So, what is that incredible cast up to now?

My So-Called Life was built around the character of Angela Chase, played by the incomparable Claire Danes. It was Angela’s so-called life, and she led the cast, as a young teenager, in a manner that had never been done before, or since. What has Claire done since she went riding away in Jordan Catalano’s car at the end of the 19th and final episode? She’s lived on the Hollywood A-List. From starring opposite Leonardo DiCaprio to winning awards portraying Temple Grandin to dropping the boom in season after season of Homeland, she remains an actress over a movie star, and a New Yorker over a Hollywood socialite. She and Hugh Dancy have one child together.

Danielle Chase was given so many priceless one-liners, she was key to the laugh out loud humor in the show. The busybody little sister of Angela Chase, she was never wholly featured in an episode, but it would seem that it was coming in season two. Perhaps a romance for little sister. Regardless, Lisa has gone on to act as an adult, and was featured for years on Family Guy, as the voice of Connie D’Amico. Lisa continues to work in the industry–predominately as a voice-over artist. Now in her 30s, Lisa could still pass for her early 20s, and perhaps that’s what has kept her from working more. Born and raised in greater Los Angeles, she still calls the city home.

Fans of Mad Men will remember Bess Armstrong as Roger Sterling’s acid pushing “friend,” in the 2012 episode, “Far Away Places,” but for fans of My So-Called Life, she will always be Patty Chase: Angela’s mom. The story line for Patty was just getting very interesting when the show was canceled, and there’s a good chance it would have led to award nominations for Bess had the show pushed into a second season. Still, she has enjoyed steady acting work since the end of the show, including long stints on One Tree Hill, House of Lies and most recently, the ABC Family series, Switched at Birth. She has enjoyed an impressive, nearly 40 year career as an actress.

Tom Irwin is an actor’s actor. He’s the guy all actors want to work with. A member of Chicago’s renowned Steppenwolf Theatre, he has long rubbed shoulders with Gary Sinise, Laurie Metcalf, John Malkovich and Joan Allen. After My So-Called Life, he continued to work in theatre, TV and film, boasting appearances in 21 Grams, LOST, Saving Grace, Grey’s Anatomy and 24 among so many others. He presently plays the character of Adrian Powell on the exceptionally well-rated series, Devious Maids, which airs on Lifetime.

Was there anyone as spasmodically hot, and yet totally cool as Rayanne Graff? A.J. Langer was an absolute firecracker in the role of Rayanne. She was magnetic. At 5’1″ she filled the frame with the presence of a giant, and offered full personification to the written word. So, what did A.J. (Allison Joy) do after My So-Called Life?  She hopped into several roles on several shows, then met an English Lord while in a bar in Las Vegas. The pair fell in love, had a couple kids and A.J. took some time away from the business. In 2011, she jumped back into the small screen mix as Erica Warner in Private Practice. She now lives in London with her husband and two sons, and serves as a spokesperson and ambassador for individuals who suffer from fibromyalgia, from which she also suffers.

The costume and hair/makeup departments on My So-Called Life had their work cut out for them with Devon Gummersall. They couldn’t get around the fact that he was a handsome kid, so they nerded him up to the nth degree. Brian Krakow–laughably referred to as “brain” by Jordan Catalano (Jared Leto)–was the kid who lived under constant pressure from his parents, and pined for the girl next door–Angela Chase (Claire Danes). After the show, Devon continued to act, and continues to this day, having appeared in the final season of Mad Men, but his focus has also been on writing and directing. At his essence, the Durango, Colorado, born Gummersall is a storyteller. He presently lives in Los Angeles, and is a member of ABC/Disney DGA Program.

She was one of two Devons on the set of My So-Called Life, and has remained tight with many of her cast members since the show ended 20 years ago. Before MSCL, Devon Odessa enjoyed guest star appearances in everything from The Wonder Years to Full House and Step By Step. After booking the role of Sharon Cherski, she became a cult icon. After the show, she continued to act in film and television, and has made appearances at events honoring the legacy of My So-Called Life. From deduction–a Bess Armstrong interview–Devon is married with a child or children, because cast members have attended weddings and showers. If Devon returns to TV in the future, only time will tell.

Mary Kay Place was an exceptionally well known actress before her recurring role as Camille Cherski on My So-Called Life. A career that included the classic, The Big Chill, and the memorable Dot Black in The Rainmaker, opposite Matt Damon. Mary Kay offered the strong foundation of support to the young actors in MSCL, and since the show ended, she has continued to enjoy her career, now 40-plus years in the making. Mary Kay has three films that will be released in 2015, and also enjoyed a guest spot in the Netflix original series, Grace and Frankie.

Was there any greater foreshadowing in My So-Called Life than Jared Leto taking the microphone as Jordan Catalano and leading a rock band? As if anyone doesn’t know what Jared Leto has been up to for the past 20 years…? Jared hopped into feature films like Fight Club, The Thin Red Line, Girl Interrupted and even played legendary runner, Steve Prefontaine in Prefontaine. Then, Jared took a serious break from acting to pursue his life in music, leading his band, 30 Seconds to Mars. After touring the world, and enjoying music at the top of the charts, Jared returned to acting with a tour de force in Dallas Buyers Club. He scored award after award, including the Oscar for Best Supporting Actor. He’s presently playing The Joker in Suicide Squad.

Delia Fisher was a character who was just beginning to enjoy some flesh in My So-Called Life before the show was cancelled. The character was destined to become a confidant to Rickie Vasquez (Wilson Cruz) in Season 2. Senta Moses brought the genuine mid-90s goods to Delia. After MSCL she went on to star in Beakman’s World, then enjoy several recurring roles in shows such as Sister, Sister, General Hospital, Greek and presently plays Principal Penelope on the popular MTV series, Faking It.

Wilson Cruz portrayed Rickie Vasquez, the first gay teenager to be featured in prime time television. Wilson has long said he didn’t feel any particular energy about being the first, but that he wanted to portray it honestly. That, he did. It was much more sincere than frequent stereotypes and stigmas that are often offered to gay teens in TV 20 years later. The Brooklyn born Cruz began acting as a child, and after My So-Called Life, he went on to enjoy recurring roles in Party of Five, Noah’s Arc and was cast in featured roles in several films and TV shows. He presently calls Los Angeles home, and is working on the FOX series, Red Band Society.

Jeff Perry’s character of Mr. Katimski, the quirky and lovable English and drama teacher, was just becoming a well known entity in the world of My So-Called Life, when the show was cancelled. An Illinois native, Perry was an accomplished character actor who was theatre seasoned, and skilled in front of the camera. After the show, he got right back to the grind, and soon thereafter enjoyed a five year run on Nash Bridges with Don Johnson and Cheech Marin. At present, Jeff Perry is playing Cyrus Beene on Scandal, and prepping for a feature film, Building Bridges.

Hearing or reading the name Hallie Lowenthal is similar to fingernails on a chalkboard. Lisa Waltz brought a lovable/loathe-able quality to Hallie, with whom Graham Chase (Tom Irwin) was likely going to endure a torrid and illicit affair in the second season. Lisa has enjoyed an impressive career since the end of My So-Called Life, including long stints on General Hospital, The Young and the Restless and the reboot of 90210. It’s a shame MSCL came to a close when it did–Hallie Lowenthal could have become a pop-culture–as opposed t0 cult–reference for a homewrecker.

She was credited as “Angel” in the Christmas episode “So-Called Angels,” and ultimately portrayed a guitar-toting, sweet-song crooning guarding angel for Rickie, and who only had interactions with Rickie and Angela. This character was the most epic of cameos in the entire, short-lived series, played by Juliana Hatfield. Juliana Hatfield emerged from the underground music scene in Boston to enjoy incredible popularity in the 1990s, most notably of The Lemonheads–playing bass and singing backup vocals, and leading The Juliana Hatfield Three. Her songs “My Sister” and “Spin The Bottle” became 1990s alternative hits. She has continued to make music, and in 2014 covered the late Elliott Smith’s “Needle In The Hay” to industry buzz.

Who would have know that Kaley Cuoco-Sweeting was part of the My So-Called Life legacy? The current, big money star of the top-rated comedy on television–Big Bang Theory–is the only other person to have played the character of Angela Chase. She appeared in a single episode–a flashback that was played during one of the introspective voice-overs. Claire Danes and Kaley have certainly offered quite the legacy and career to the same iconic 1990s character, though Claire should continue to enjoy the glory.