Cast Of Family Ties: Where Are They Now? 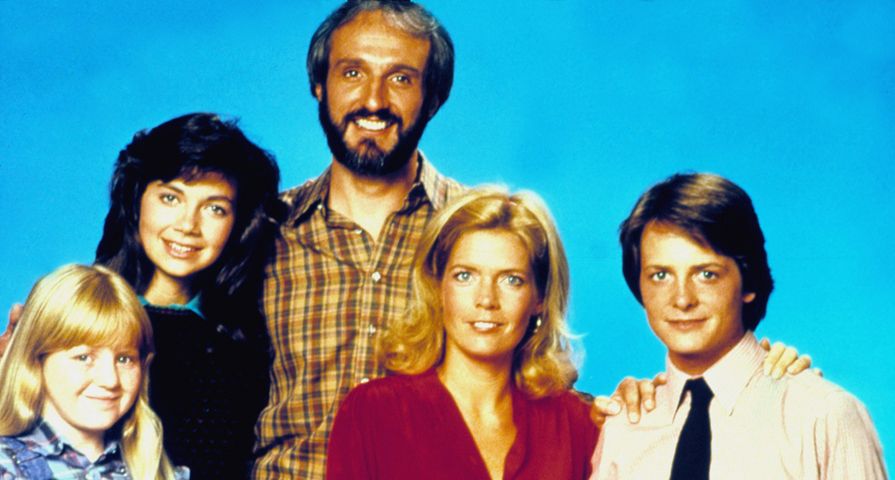 Back in the ‘80s, Family Ties was considered a ‘must watch’ show. A third of all American households gathered around the television on Thursday nights to see the hilarious antics of the Keaton family which included the hippie parents, Steven and Elyse, their geeky conservative eldest son Alex, the sweet but simple-minded daughter Mallory, blonde and bubbly Jennifer, and the youngest son, little Andrew (Andy.) It’s hard to believe the show has been off the air for more than 25 years. All of the stars have gone in different career directions. Their lives post-Family Ties lives are a combination of successful, surprising and shocking. Read more to find out what the main cast of Family Ties is up to now!

She was 35-years-old when she landed the role of Elyse, the matriarch of the Keaton family. Today she is 69 and has had a wide variety of personal and professional ups and downs. After the sitcom wrapped, Meredith continued to land acting gigs from sitcoms to TV mini-series. She gained critical acclaim and an Emmy nod for her lead role in A Woman Scorned: The Betty Broderick Story in 1992. Meredith also made a guest appearance in Michael J. Fox’s sitcom Spin City in 1997. But her showbiz career was sidelined in 1999 when she was diagnosed with breast cancer. Much like her Family Ties on-screen son, Michael J Fox, she decided to use the diagnosis to raise funds and awareness for the disease by establishing the Meredith Baxter Foundation for Breast Cancer Research. After recovering she returned to acting but it was her personal life that made her the talk of Hollywood in 2009. She revealed in an exclusive Today Show interview with Matt Lauer that she was in a same-sex relationship. It was a shocking revelation as she had previously been married three times to men and had five adult children. But the headlines died down and life is back to normal for Meredith. She continues to act and has been married to contractor Nancy Locke since December 8, 2013.

He was only 35-years-old when he landed the role of America’s favorite dad. In fact, he was only 14-years-older than Michael J. Fox who played his on-screen son. Michael Gross is now 69 and has continued on in show business since Family Ties wrapped. He has had roles in popular sitcoms such as How I Met Your Mother, Parks and Recreation, Anger Management, Grace & Frankie, Curb Your Enthusiasm and he also appeared on Michael J. Fox’s sitcom, Spin City. He starred in the dramas ER, Law and Order: SVU and Suits. He continues with his life-long hobby of being a railway enthusiast with an extensive collection of railway antiques and is part owner of a working railroad that runs between Lamy and Santa Fe, New Mexico. He currently lives in California his his wife of 32 years, Elza Bergeron, and continues to act.

She was 9-years-old when she joined the sitcom playing the youngest daughter. Tina Yothers is now 44-years-old and looks nothing like her on-screen character. When Family Ties wrapped, Tina took a break from acting and focused her efforts on becoming a musician. In fact, it was while on Family Ties that Tina released her first single called “Baby I’m Back in Love Again.” It never cracked the top 40 but Tina was determined. Wanting to distance herself from her Family Ties character, she dyed her hair jet-black and also changed her entire wardrobe to black. With her brother Cory, she formed the six-piece band called Jaded. The band released three records, but never achieved mainstream airplay. The band broke up in the early 2000s and Tina returned to television, but this time as a reality star. In 2006 she starred in Celebrity Fit Club losing over 40 pounds. In 2012, she appeared in Celebrity Wife Swap (swapping with Niece Nash) and then in 2013 appeared in What Not To Wear. Today she is focused on being a stay-at-home mom to her three children. She currently resides in Ontario, California, and is married to electrician Robert Kaiser.

Things You Might Not Know About Michael J. Fox and Tracy Pollan's Relationship

During Season 4, Meredith Baxter became pregnant so the writers and producers decided to write her pregnancy into the show. Enter 6-year-old Brian Bonsall. He joined the cast in Season 5 as the youngest Keaton kid. He played fresh-faced little Andy who became a fan favorite for his chemistry with his on-screen older brother played by Michael J. Fox. Life has been a struggle for Bonsall since the sitcom wrapped. He had a few low-profile on-screen roles after Family Ties, but then decided to retire completely from acting in 1995. Like his older on-screen sister, Tina Yothers, he tried his hand at music. Unfortunately, a few run-ins with the law sidelined his plans. He was arrested for drunk driving in 2004, for assault in 2007 and went to jail briefly in 2009, again for assault. But he is trying to get his life back on track. He is now living in Boulder, Colorado, and is a member of the musical duo, Bootjack & Bonz (he’s Bonz.) They perform regularly in Colorado and have finished their first EP.

Justine was 16-years-old when Family Ties premiered. She played dim-witted middle child Mallory, a role that earned her two Emmy and one Golden Globe nomination. She has since had a wide spectrum of careers since leaving the sitcom. Initially, she continued on in acting starring in the short-lived sitcom Men Behaving Badly and the mini-series, Out of Order, but then took a break to open a clothing design company called Justine Bateman Designs in 2000 which focused on her one-of-a-kind hand knits. Her fashions were featured at high-end outlets such as Saks, Fred Segal and Bendels, but she closed the company down in 2003. Justine then started a family. She has two children – Duke and Gianetta – with her husband Mark Fluent. She returned to acting in the mid-2000s starring in Men in Trees and guest starring in her younger brother Jason Bateman’s hit show Arrested Development. But once again, Justine took a break from acting and focused on a digital production career. She started attending UCLA in 2012 for Digital Management and Computer Science Studies. She graduated in June 2016 and continues to act sporadically and currently runs a production and consulting company called SECTION 5.

Scott was 28-years-old when he joined the cast as the Mallory’s earring-wearing, motorcycle-riding artist boyfriend, Nick. After Family Ties wrapped, he was offered a spin-off series called The Art of Being Nick. For reasons that were never explained, the series was not picked up despite getting good ratings after the pilot aired. He had regular acting gigs from 1990 to 2010, but then he stopped acting all together and took career in a whole new direction. He is now the Managing Director of Excelsior Capital Partners investment firm. He lives in Los Angeles, is married and has one son.

Marc was 14 years old when he joined the show as the Keaton’s geeky neighbour Irwin “Skippy” Handelman. Skippy was a regular on the show as not only the neighbour, but as Alex’s best friend and for his never-ending-always-unsuccessful attempts to date Mallory. Today he is 49 years old and has moved away from acting and into stand-up comedy. Before landing the role of Skippy, Marc actually did a stand-up comedy routine on the The Merv Griffen Show as a teenager. When he was 17 and still on Family Ties, he again went out on the road as a stand-up comic. So, it’s no surprise really that Marc continued down that path. In 2006, he even landed a spot on Last Comic Standing. In addition to his stand-up comedy act, he also writes and produces for cable channels such as Disney, Food and Animal Planet. He has never been married, has no kids and currently lives in Laurel Canyon in Los Angeles.

Tracy Pollan was 25-years-old when she landed the role of Ellen Reed, Alex Keaton’s first girlfriend on the series. She appeared from 1985-1987 and the Alex/Ellen relationship was a fan favorite. Their love song on the series was “At This Moment” by Billy Vera and The Beaters. The song was originally released in 1981 to little fanfare. But thanks to the popularity of  the Family Ties couple, the song shot to #1 on the Billboard Top 100 Pop Chart in 1987. After leaving the series, Pollan and Fox began dating in real life. They married in 1988 and have four children – Sam, twins Aquinnah and Schuyler and Esme. Pollen has largely left acting. She has appeared in a handful of guest TV roles including Law & Order: SVU (for which she earned a Primetime Emmy Award) as well as both her husband’s sitcom’s – Spin City and the Michael J. Fox Show. Primarily though she has been a stay-at-home mom to her children over the last two decades. In 2014 Pollan added author to her resume. She along with her two sisters and mother wrote The Pollan Family Table cookbook.

Courteney was 23-years-old when she landed the two-year recurring role of Alex Keaton’s girlfriend Lauren Miller. Aside from Michael J. Fox, she had the most successful post-Family Ties career. She is most famous for her portrayal of Monica Gellar on the hit series Friends. And the acting roles just kept coming. She starred the Scream movie franchise, the sitcom Cougar Town, which earned her her first Golden Globe nomination, then the FX series Dirt and the TV movie Talhotblond, to name only a few. She was married for over 10 years to David Arquette with whom she has a daughter named Coco. She is currently dating Snow Patrol band member Johnny McDaid and continues to not only act but direct and produce.

He was the breakout star of the series playing the Reagan-loving, suit-and-tie wearing, super smart Alex P. Keaton. Michael was 19-years-old when he landed the role. He had been a struggling actor for over a year after leaving his hometown of Edmonton, Alberta, Canada, for Los Angeles. He has gone on to star in the Back to the Future movies, Teen Wolf, Bright Lights, Big City and many other motion pictures. He also starred in two more other sitcoms created specifically for him – Spin City and The Michael J. Fox Show. Today he is 55-years-old and still acting, but the majority of his time is focused on The Michael J. Fox Foundation for Parkinson’s Research that he founded in 2000 after being diagnosed with the disease in 1991. To date, the foundation has raised over $95 million dollars for Parkinson’s research. Fox received an honorary doctorate in medicine from Karolinska Institute for his contributions to research in Parkinson’s disease. He has also received an honorary Doctor of Laws from the University of British Columbia and a Doctor of Fine Arts from New York University. He is the author of two books, has won dozens of awards (Emmys, Golden Globes, SAG awards) and has stars on both Canada and Hollywood’s Walk of Fame. He currently lives in Manhattan with his wife Tracy Pollan.