Home » Entertainment » Celebrities » Cast Of Entourage: Where Are They Now? 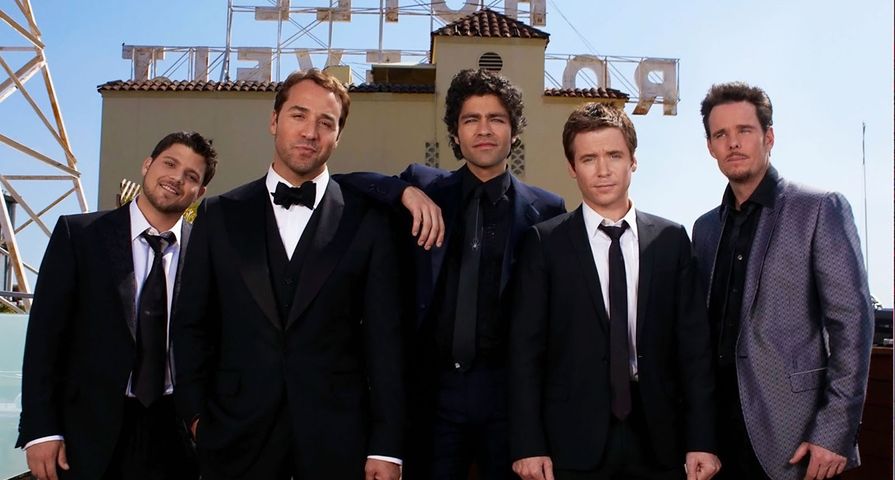 The HBO series Entourage was a huge hit for eight seasons from 2004 to 2011. The show was based on the life of Mark Wahlberg (a producer of the show) when his assistant supposedly asked Mark if he could film him and his friends because they were ‘hilarious.’ Vincent Chase was the Whalberg figure in the series, the show wasn’t supposed to be a documentary, but rather a more satirical take on his career. The series features Vincent’s ‘entourage’ which is a group of his childhood friends from Queens, New York and a lot of awesome cameo appearances from celebrities appearing as themselves in sometimes a fictionalized version. It’s been six years since the series ended, and despite the big flop of the highly anticipated movie, the show was really good while it lasted. Here’s a look at where the actors and actresses from the show are now:

Ari Gold’s sassy but devoted wife has had no trouble finding work after appearing on Entourage. Similar to some of her co-stars, Perrey sticks to what she knows best and that is television. Right when the show wrapped up filming she appeared on an episode of popular series like White Collar and NCIS. She did a television film called Secret Lives of Husbands and Wives and had more guest appearances in shows like Royal Pains and Perception. Her biggest success has been a recurring role on the USA Network series Covert Affairs in 2014. She of course returned back to the Entourage franchise for the movie in 2015. Not bad Perrey!

Emmanuelle Chriqui played Sloan McQuewick, the on-again off-again love interest of Eric Murphy. She’s doing quite well for herself and managed to continuously have a job since the series ended. She had a main role on Thundercats voicing the character of Cheetara and on Tron: Uprising voicing Paige. She landed a recurring role on the CBS drama series The Mentalist from 2012 to 2013 right after Entourage wrapped up filming. In 2013 and 2014 she was the voice of of Sapphire Stagg on Beware the Batman; she had a regular role on Cleaners; and appeared in episodes of Men at Work, Killing Jesus and a main role on Murder in the First. She’s done just as well in the film department with roles in Fort Bliss, A Short History of Decay, The Steps and Omphaios which is currently in post-production.

Jeremy Piven has found great success since appearing on Entourage as the hilarious, rage filled super-agent Ari Gold. The show helped thrust him into the spotlight as he won a Golden Globe and three consecutive Emmy Awards for his performance on Entourage. After the show ended he did a couple movies like The Pirates! Bnad of Misfits, So Undercover, Edge of Tomorrow and Sin City: A Dame to Kill For. But his big success has once again been on television, this time on a British period drama. From 2013 to 2016, he appeared on the successful series called Mr. Selfridge, a loose dramatization on the life of Harry Gordon Selfridge, a department store owner who brought recreation shopping to London, Britain in the early 1900s.

Jerry Ferrara, otherwise known as “Turtle,” was definitely a fan favorite on the series Entourage. He was Vince’s slightly overweight, but lovable personal driver/assistant, and despite his continuously teased character on the show, in the real world he’s enjoyed more success than some of his co-stars. Firstly, he’s slimmed down A LOT. He then landed a slew of supporting roles in big films like Battleship, Seven Days in Utopia, Empire State, Last Vegas, 7500, Lone Survivor, Think Like a Man and Think Like a Man Too. He also had a role in the biographical drama directed by Clint Eastwood called Sully. Similar to his character on the show, he’s dabbled a bit in the food and beverage industry, this time it isn’t tequila, but rather deli meat! He co-founded the deli restaurant called Fat Sal’s. Sounds like ‘Turtle’ is doing quite well for himself!

Kevin Dillon has had a hard time breaking away from his character as Johnny “Drama” Chase, Vince’s dead-weight older brother. In the real world, Dillon was all set to continue working after the finale episode of Entourage. The next series he had lined up was the CBS show How to Be a Gentleman, but it got canceled after only nine episodes. He’s very similar to his character on the show, except instead of being the older brother, he’s the younger brother of fellow actor Matt Dillon. Since then he moved onto films with three releases in addition to the Entourage movie, Compulsion, The Throwaways and Underdogs. Unfortunately, the films were small productions and he’s never been able to reach the success he had as Johnny Drama. Kevin also had a brief run-in with the law when he faced potential charges (which he is now completely cleared of) for assaulting a group of teenagers at a gas station who were supposedly taunting him about his Entourage character.

Vince’s right hand man and manager Eric Murphy, played by Kevin Connolly, has made an attempt to create an acting career since appearing on Entourage, but it isn’t really working. He received a role in the 2014 indie film Reach Me alongside big actors like Sylvester Stallone, Kelsey Grammar and Kyra Sedwick, but the film was slashed by critics and holds a 0% rating on Rotten Tomatoes. Afterwards he landed a series regular role on the CBS show Friends With Better Lives, but it got canceled after only one season. He’s also done some directing with projects like an ESPN documentary called Big Shot about the New York Islanders and Dear Eleanor.

Adrian Grenier had the starring role on Entourage as Vince Chase, the successful actor who brought all of his comrades from childhood along with him on his rise to the top in Hollywood. In real life Grenier has not enjoyed the same success as his egotistical character on the show. His most recent project since the show ended was an independent film called Goodbye World which received poor reviews and didn’t even preview at the box office. Since then he’s turned his attention away from acting and onto more productive documentary work and environmentalism. He kickstarted an environmental fund to film a documentary called 52: The Search for the Loneliest Whale. The film almost didn’t make it off the ground due to a lack of funding, but last minute he received a hefty donation from fellow actor Leonardo DiCaprio in the amount of $50,000! Before that, he produced another documentary called How to Make Money Selling Drugs, and he’s also got one film in post-production called Public Affairs.