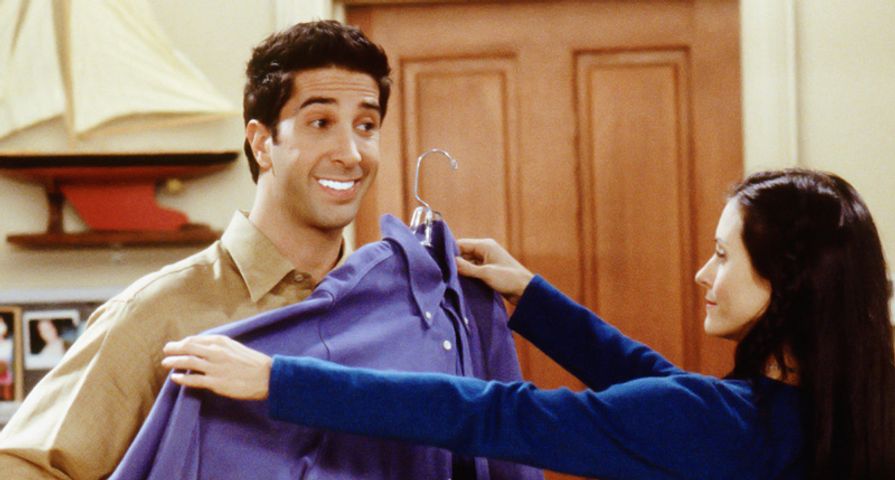 Ross Geller may be remembered more for his on-again-off-again relationship (and “break”) with Rachel on Friends, but when you take some time to think through the episodes, you’ll realize how often Ross was making fans laugh … and laugh HARD. From leather pants to holiday armadillos to extreme teeth whitening to extreme skin tanning, Ross had his fair share of hilarious moments. Here are 12 of Ross Geller’s funniest moments on Friends.

You can do anything if you put your mind to it. Well, maybe not everything. Like, you can’t defy the laws of physics as the friends found out while trying to help Ross move in his new sofa. The size of the group’s determination couldn’t match the size of the piece of furniture and when faced with a turn in the staircase, Rachel and Chandler were unable to get the thing to budge no matter how many times Ross yelled, “Pivot! Pivot! PI-VOT!” In the end, the sofa was sawed in half and the laughs were more than doubled.

Ross is feeling anything but thankful when his boss steals his precious Thanksgiving sandwich. In fact, he goes off in an absolute rage when he finds out that not only did the man steal the special sandwich made for him by Monica, but the man also threw the majority of the sandwich in the trash when it was too big for him to eat. Ross’s anger echoes through the city as he yells, “My sandwich? MY SANDWICH?!”

When Phoebe and Rachel decide to take some self-defence classes to protect themselves from the dangers of New York, Ross feels that they could benefit from his superior knowledge of martial arts. “Look, I studied karate for a long time, and there’s a concept you should really be familiar with. It’s what the Japanese call unagi.” Rachel is less than impressed with Ross’s skills: “Isn’t that a kind of sushi?”

When the holidays roll around, there’s always a lot of talk about Santa and the fun that will come along with Christmas. Ross is happy to indulge Ben’s holiday happiness when it comes to Christmas, but he wants his part-Jewish son to also know about Chanukah and look forward to it as much as Santa’s arrival. But since Chanukah doesn’t have a jolly fellow bringing gifts down the chimney, Ross decides to come up with his own figure to celebrate. Thus, Ben and fans of the show alike were introduced to the Holiday Armadillo. Armadillo? Yup, armadillo. Ross dressed up as the giant, scaly creature yet didn’t end up as jolly as Ol’ Mr. Claus.

When Ross decides to start playing keyboard again he startles the friends with his distinctive signature “sound” that includes more noises than actual tunes – think helicopters, bells, glass smashing, and anything else he has on his old-school sound effects CD. Encouraged by an awed Phoebe, Ross takes his music to Central Perk where he quickly clears the place. When he discovers that Phoebe no longer wants to play her music because she feels dwarfed by his “talent” he says he won’t perform again so that she can continue what she loves. The friends were definitely grateful and they sure thought “Smelly Cat” sounded good after that.

Parents will do pretty much anything to make their baby laugh, especially when it’s the first time they’ve heard their little one giggle. Doing whatever made them laugh over and over again to keep them laughing is the natural reaction. But when Ross gets Emma to laugh by singing “Baby Got Back” (ya know, “I like big butts and I cannot lie…”) to her, he’s thrilled at first, then clues in. “I’m a terrible father!”

It’s a dream-come-true for Ross and Monica when Joey gets them an invite to “Dick Clark’s New Year’s Rockin’ Eve” and they’re willing to do whatever it takes to make sure they get filmed for the show. Whatever it takes ends up including the siblings’ high school dance routine. With epic moves that are just as Gellar-ish as you’d imagine, they certainly make their mark on Dick Clark’s stage.

When Ross decides to indulge in a little tanning, a spray-tan booth is his tool of choice. The instructions seem simple (“count to five then turn”) but when Ross adds in some additional “Mississippi’s” into his count, he doesn’t turn quite fast enough ending up in with a hilariously uneven tan that is worth a heck of a lot of laughs.

Nerves can make people do all sorts of silly things from uneven breathing to the trembles to faking a British accent . Wait … wait?! When Ross becomes Professor Gellar, he’s more than a little nervous as he steps in front of his first class of students. When a (horribly fake) British accent pops out, Ross is stuck with either keeping up the foreign facade or figuring out how to phase it out.

When Ross decided to try out spray-tanning, he ended up much darker than he expected – or, at least half of him did. When he decided to try out teeth whitening for an upcoming date, things went in the opposite direction and he ended up with teeth brighter than a blinding supernova. His extremely white chompers freak everyone out including Phoebe who reacts with a fitting, “DEMON!”

If seeing “The One with the Prom Video” for the first time made you snort-laugh or pee yourself a little, don’t be ashamed. You’re surely not alone. Or maybe you are and you’re just a little bit gross 😉 But in all honestly, if Ross’s super-curly hair, tragic ’80’s mustache, and forlorn Rachel-pining keyboard playing didn’t make you burst out laughing, you may want to see what’s wrong with your obviously faulty sense of humor.

When the friends decide to tackle a few New Year’s resolutions, Rachel swears not to gossip anymore; Chandler tries to turn off his snarky sarcasm; and Ross proclaims that he will be doing something new every single day. When one of those new things includes wearing leather pants on a date, things end up heating up – literally, like, a super-hot apartment – and Ross ends up roasting in his tight-skinned trousers. Before the audience knows it, he’s half-naked when he can’t get the shrunken, sticky, paste-filled pants back on. An S.O.S. call to Joey is … helpful? Ross: “They’re still not coming on, man! And the lotion and the powder have made a paste!” Joey: “Really? Uh, what color is it?” Ross: “What difference does that make?!” Joey: “Well, I’m just… If the paste matches the pants, you can make yourself a pair of paste pants and she won’t know the difference!” Thank goodness for friends (or should we say Friends) like Joey!