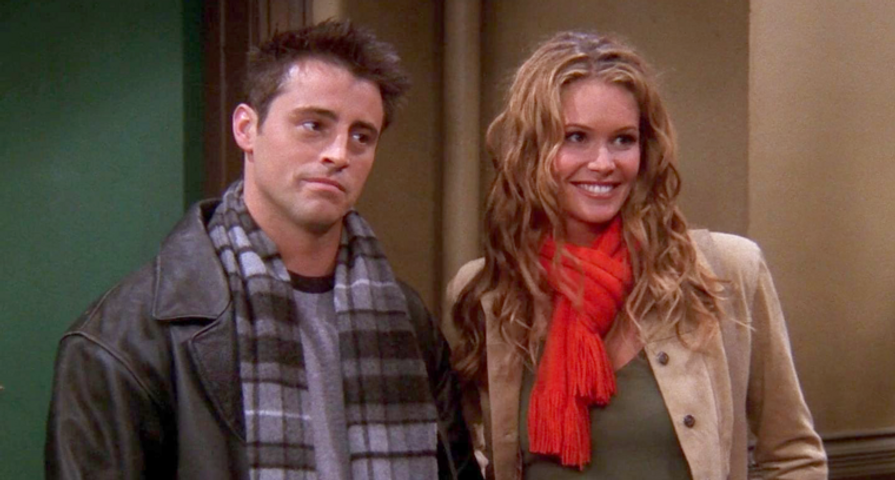 Friends was one of those awesome shows that truly never goes out of style. The ‘90s sitcom goes down in history as one of the best shows in history! Friends followed a group of friends living in New York City, as they navigated through their life, including their careers and relationships. One of the characters who was never shy about dating was Joey Tribbiani. He never had any shortage of dates throughout the series, especially with his infamous one liner, “How you doing?” We’re taking a walk down memory lane with a definitive ranking of all 12 of Joey’s most popular love interests! Check it out:

It was obvious from the beginning that these two were not a great match and that she was a much better pair for Ross. She was definitely a kind, smart, lovely woman, but she just wasn’t the woman for Joey. They didn’t have anything in common and didn’t even really have good chemistry! These two were just all wrong which is why she lands in the worst spot on this list.

Safe to say many Friends fans (including the stars themselves) would agree that this relationship was just all wrong which is why it lands as one of the worst. While Rachel and Joey are a great pair who get along amazingly well, there is no romantic chemistry between the two. This became evident when they tried to make their relationship work and couldn’t. All this relationship ever did was make things incredibly awkward.

We have to admit, Australian dancer Janine Lecroix was a catch, but she didn’t fit into Joey’s life, nor did she really want to try. When Joey realized she didn’t like two of his best friends, Monica and Chandler, that was an immediate deal breaker. Let’s face it, the only reason Joey really wanted to date her in the first place was because he was attracted to her, but they didn’t necessarily have a lot in common. Plus, they were roommates!

This relationship wasn’t exactly the strongest. Joey pretty much only dated Lauren so that he could make another woman jealous. Lauren was Kate Miller’s understudy. She wasn’t all that memorable and was completely enamored with Joey, which kind of turned Joey off, but made it easy for him to ask her out on a date. When she found out that Joey wasn’t really interested in her, she got very immature and pouty…probably for the best that this one didn’t work out. She seemed a little too immature..even for Joey!

Sandy wasn’t really a girlfriend, but rather a date. She was Joey’s date to Monica’s New Years Eve party in season 1. While it seemed like Joey really liked her (or just had the hots for her), she wasn’t a great date. She brought her children to the party and then ended up kissing another guy! Safe to say this one didn’t work out.

Kathy was a really cool chick, but she committed the ultimate sin. She cheated on Joey with his best friend, Chandler! Even though she probably was a better match for Chandler and he’s equally to blame for the cheating fiasco, she shouldn’t have put herself between two best friends and definitely should have broken up with Joey before getting flirty with Chandler!

Sarah learned the hard way that “Joey doesn’t share food!” The poor girl seemed like a really nice, but unfortunately for her, Joey’s one deal breaker with relationships is stealing food off his plate. To be fair, he tried, but when she said he couldn’t eat her food either, he just couldn’t help himself and ended up stealing her dessert off her plate while she was in the washroom. Oh Joey! We didn’t get to know Sarah well enough to judge whether this relationship would’ve worked or not, so she lands somewhere in the middle.

Melanie was one of Joey’s girlfriends from season 1. While dating her, Joey was secretly taking part in a fertility study to make some extra cash. Part of the stipulation of the study was that he couldn’t sleep with anyone, so in order to keep her interested in him, he did ‘other’ stuff in the bedroom, which made him irresistible to Melanie! Oh, and how could we forget, she worked in the fruit basket business! We’re not quite sure what happened with these two, but Melanie was definitely a nice girl.

This relationship was hilarious! Katie was pretty and outgoing, two things Joey needs in a girlfriend, but she had one major downside. She was a serial puncher! The adorable little brunette seemed like such a girly-girl, but then whenever she thought something was funny, cute, or anything for that matter, she’d punch Joey! While it was supposed to be in a playful way, the problem was that it hurt, a lot. Joey was not a fan.

Erin was super sweet. While she didn’t end up wanting to date Joey in the end, we still put her near the top of this list because we really thought they could have made a good couple! The story with these two goes that Joey hooked up with Erin after they went on a date, and then tried to get Rachel to dump her for him. Rachel wouldn’t do it and ended up getting Erin and Joey to go out again. Not only that, but Joey ended up changing his mind and developing feelings for Erin, while at the same time Erin did the opposite. She lost interest in Joey after getting to know him! This was just a sad scenario, but at least from the outside they made a really cute couple!

These two were a very odd match, but also worked kinda worked? Cecilia Monroe started off as a mentor for Joey which eventually blossomed into a relationship. She was older than him, smart and poised which was possibly just what Joey needed in a woman (although we’re still not sure if she only liked Joey because it made her feel better about herself to date a younger man)! When she found out she was fired from her long-time gig on Days of Our Lives and that Joey was taking over her character, she helped teach him how to be Jessica Lockhart. Not surprisingly, their relationship didn’t last long. She ended up dumping him to move to Guadalajara, but we can’t help but wonder what could have happened between these two? Plus, she’s Susan Sarandon.

We admit, Kate Miller was a total jerk from the get-go, but she ended up falling for Joey and they had a pretty steamy romance. She lands in the number one spot on this list because she was the one woman (besides Rachel) that Joey was really infatuated with. These two starred in a play together, and Joey instantly fell in love. She was one of the few women who truly broke his heart. When they first met, she was dating their director, but she eventually dumped him for Joey. While she wasn’t exactly the nicest woman…we feel like these two had the best chemistry. Unfortunately, after they finally got together, she quit the play and took a job in L.A. At least he got her for a hot second!