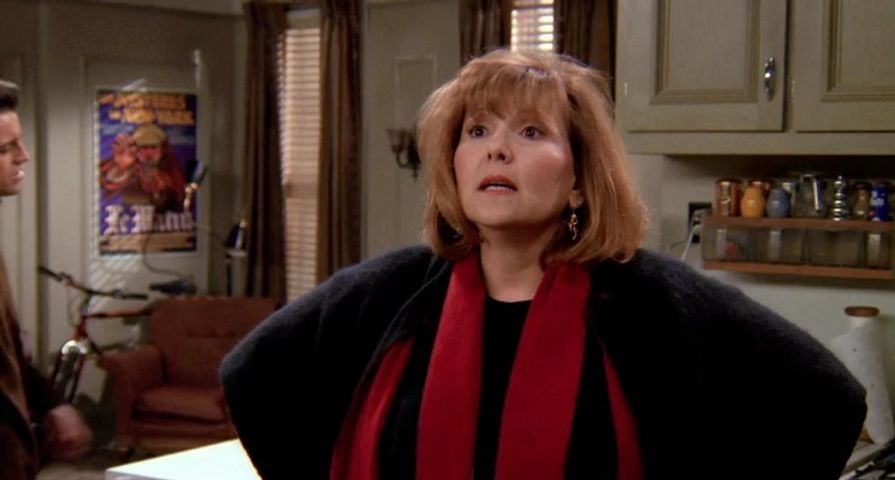 The heartwarming and hilarious relationships between the sensational six main characters on Friends were always the focal point of the show (obviously, otherwise it wouldn’t have been given it’s super apt name), but throughout the years and many seasons, a few family members stopped by to stir up some trouble and/or lend some loving support. From parents and siblings, to offspring and one particularly hot cousin, here are 12 of the most memorable family members to appear on Friends.

When cousin Cassie − played by the glamorously gorgeous Denise Richards − arrives to stay with the bride to be before Monica and Chandler’s wedding, her long flowing tresses that she flips around like a mermaid emerging from the water (in slow motion and to sexy music, no less) sparks a little inappropriate staring from Chandler. Forcing Monica to send her unwitting relation off to Ross’ apartment. Ross then decides to make a move on his cousin that couldn’t have had us cringing (or laughing) any harder. Finally settling at Phoebe’s place to attempt to evade the fellas awkward attention, even Phoebe isn’t immune to Cassie’s charming ways.

Phoebe Buffay was certainly one of the quirkier characters to appear on TV and she apparently came by it naturally. Raised for the most part by her adoptive mother, step-father, and grandmother, Phoebe only met her biological parents after tracking them down as an adult. Despite his runaway ways, Phoebes’ bio dad (played by Bob Balaban) was just as flighty as his kiddo even though he was a heck of a lot less reliable.

Phoebe may have dearly loved her grandmother, but even she admitted the older lady wasn’t exactly an angel. She hid the fact that she knew where Phoebe’s long lost father lived. She used a photo of Einstein to stand in for Phoebe’s grandfather, and making up the whole Nesslé Toulhouss (or Nestle Tollhouse) family cookie recipe were just a few of the transgressions this old taxi cab driving grandma made with the well-being of her granddaughter in mind.

When Joey’s parents stepped onto the scene, it wasn’t under the best (or most understandable) circumstances. It was in this episode that Joey discovered his father, Joey Tribbiani Sr., has been having a long-term affair with a woman named Ronnie. He forced his father to call things off with his mistress, but to Joey’s shock and horror, his mom, Gloria Tribbiani showed up and is mad at Joey, NOT her unfaithful hubby. She revealed she’s well aware of her husband’s affair and also admitted he’s much nicer to be around now that he has a “hobby.” This prompts Joey to tell his father to continue his affair, to continue to lie about it, and to continue to make his mother happy. It may have been an unexpected twist on infidelity, but even on sitcoms, the heart wants what the heart wants.

Joey Tribbiani is the only boy in a family that includes seven sisters. Joey’s sisters include Mary Therese (Mimi Lieber), who is also known as Mary Teresa Christina Ricci; Mary Angela (Holly Gagnier); Dina (Marla Sokoloff); Gina (Drea de Matteo); Tina (Lisa Maris); Veronica (Dena Miceli); and Cookie (Alex Meneses). Yep, Cookie, who can throw a mean punch. While Joey’s sisters popped up every once in a while, the most notable occasions were undoubtedly when Chandler drunkenly sleeps with Mary Angela (though he can’t remember which sister he slept with after the fact) and when young Dina shows up under the guise of asking Rachel for career advice and eventually admitting that she’s pregnant. Even though Joey’s sisters were never a huge part of the show, it was still fun whenever one of them popped up.

Rachel’s mom, Sandra Green (played by Marlo Thomas) nearly broke our hearts when she revealed to her daughter, “You didn’t marry your Barry, honey. But I married mine.” Meaning that she had married her husband, Dr. Leonard Green, because he was the kind of man she was expected to be with as opposed to a man she truly loved, so it was understandable that she felt the need to leave him after witnessing Rachel’s brave choice to strike out on her own and be true to her heart. As for Rachel’s dad, played by Ron Leibman, he wasn’t necessarily a bad man, he was just the kind of hard-nosed father that you might expect to see around the country club. Though, frankly, his ongoing disapproval of Ross was always hilarious.

The fact that Rachel had two spoiled sisters provided to be the perfect opportunity to cast a couple of fabulous guest stars. Reese Witherspoon stepped in as Rachel’s youngest sister, who runs away from home when her father cuts her off, and her her second sister, Amy Green (played by Christina Applegate) ends up at Rachel’s apartment after experiencing boyfriend troubles and offers up her services as a babysitter for Emma. Bad idea! This aunt can’t even get her niece’s name right let alone take proper care of the little one!

Divorcing when their son was 9-years-old, Nora Tyler Bing (played by Morgan Fairchild) and Charles Bing (played by Kathleen Turner) always spiced up the scenes they showed up in. Nora always knew how to make her son steam with her over-the-top ways, though she took things a little too far when she kissed Ross. Uh oh! Charles, on the other hand, managed to have a strained relationship with his son despite Chandler once performing in his father’s drag routine of “It’s Raining Men.” When Nora and Charles met up at Chandler and Monica’s wedding, things were more than a little frosty between these two exes, but it was just enough to spark lots of laughs from viewers.

Monica and Ross’ parents, Judy and Jack Geller, were undoubtedly the parental figures who appeared most during the shows long run, and over the years fans became nearly as fond of these two as they were of the main six cast members. Judy Geller (played by Christina Pickles) was the perfect epitome of every overly-critical yet totally unaware mother, while Jack Geller (played by Elliott Gould) was the lovable (if sometimes somewhat oblivious) suburban father. Infamously (though unconsciously) favoring their son over their daughter, these two were always good for a few laughs at the expense of certain idiosyncratic family dynamics.

Frank Buffay Jr. (played by Giovanni Ribisi) was just a teen when Phoebe first found him while trying to track down their long lost father. Eagerly and lovingly stepping into the big sister role, Phoebe was there for her half-brother Frank Jr. for every major moment in his life, from his initially questionable PDA-filled marriage to his former home economics teacher Alice Knight (or Mrs. Knight as he awkwardly once called her) to being the surrogate that carried the pair’s triplets when they themselves were unable to conceive. While Frank was just as much of an, er, unique individual as his big sister, he was also the stable familial connection that Phoebe had always lacked and so desperately wanted.

While Phoebe’s younger half-brother Frank Jr. was a sweet (if simple and kind of strange) sibling, her identical twin Ursula (played by Lisa Kudrow herself) was pretty much the exact opposite. Unscrupulous and manipulative, Ursula was not only Phoebe’s twin, she was basically Phoebe’s evil twin. First showing up as a waiter at Riff’s in Mad About You (which prompted one teeny tiny cross-over where Jamie and her pal step into Central Perk and mistake Phoebe for her waitress sister), Ursula soon became an occasional character that regularly appeared on the show to steal her sister’s identity, date a Sean Penn character under false pretenses, and even star in, um, adult movies. Oh my!

1. Ben, Emma, the Triplets, and the Twins

While parents, siblings, and hot cousins were all memorable characters to appear on Friends, the kiddos definitely deserve the number one spot. From the very beginning and Ross’ relationship with his son Ben (eventually played by Cole Sprouse) to the same father becoming a parent for the second time after welcoming little Emma into the world with Rachel, children were always a key part of the relationships on the show. When Phoebe helped her brother and sister-in-law welcome triplets into the world, we were introduced to Leslie, Chandler, and Frank Jr. Jr., and when Monica and Chandler decided to adopt, they ended up with not just one baby, but two. Bringing home Erica Geller-Bing (named after the baby’s birth mother who was played by Anna Faris) and Jack Geller-Bing (named after the baby’s grandfather), we can’t wait for these kiddos to grow up and all become their own group of fabulous friends.