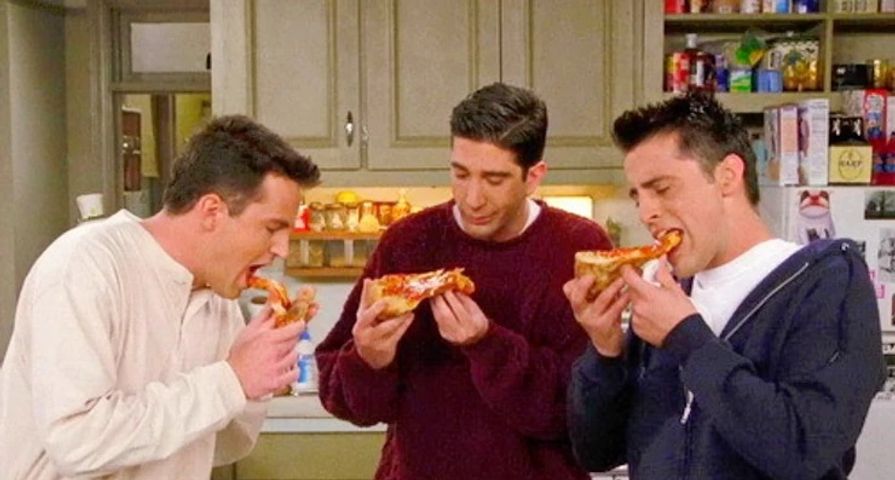 Best bros, bosom buddies, manly mates, cheery chums, a dream team of dedicated dudes − whatever you call them, true-blue friends for life are certainly a treasure indeed. This brings us to Ross Gellar and Chandler Bing, who had been besties since college on Friends. Joey Tribbiani came along a few years later when he became Chandler’s new roommate and these three became the kind of pals every dude should be lucky enough to have in their lives. Sticking together through women troubles, rivalries, and a cringe-worthy commando (i.e. NO UNDERPANTS) situation, this trio certainly had their fair share of hilarious and bond-forming moments. Check out these 10 times when Ross, Chandler, and Joey were the best bros on Friends.

When Emily and Ross divorced, Ross is forced out of the apartment he was subletting from Emily’s cousin. Joey wastes no time to help his buddy out and offers to let Ross move in with him and Chandler. Ross has a few quirks that soon begin to grate on the nerves of his new roomies. Changing the personal message on their answering machine, asking them to chip in on new air filters for his dehumidifier, and using those lovely hand gestures to “keep it down.” This all drives the boy’s to help Ross look for a new apartment, but after a few questionable apartment viewings, Chandler and Joey stick up for their buddy − albeit by telling a potential landlord that he is a big tap dancing pimp!

It’s been a while since Ross has… well, er, ya know, been intimate with a lady, so he asks Joey (who’s known for his success with women) for some advice. Like a true friend, Joey sits Ross down and tells him his “backpacking through Western Europe” story, which, according to Joey, will guarantee a whole lotta lovin’. After hearing the story (and having his heart adorably melted), Ross was convinced that it would work for him just as well as it worked for Joey. Though things don’t quite pan out for Ross, as his date continues to interrupt his storytelling. But, luckily for Ross, when Rachel attempts to use the same story on him, it’s just the thing that’s need to re-spark the passion between our favorite sitcom couple.

8. The One When Joey Tries to Help Ross With the Leather Pants Problem – Season 5, Episode 11

It’s always good to have a friend around for emergency fashion advice. When Ross decides to go for a more edgy look as part of his New Year’s resolution to try new things, he chooses the path of black leather pants. After a particularly steamy date (heat-wise, not sexy-wise), he finds himself in a squeeze when his pants seem to shrink from the heat. Ross escapes to his lady-friend’s bathroom, and makes a quick emergency call to Joey who tries to free his friend despite the fact that he’s not actually there in person. Ultimately, his suggestion of adding baby powder mixed with sweat results in disaster − “It’s formed some kind of paste!” But, it was really the willingness to help out that counts.

Having a friend to depend on to help you move or go on a double date with you is one level of friendship, but Joey Tribbiani was willing to go above and beyond for his bros in truly holy ways. When Joey offers to become ordained online in order to officiate Chandler and Monica’s wedding, Joey gets the job done… eventually. Despite having to deal with a drunken co-star (played by acclaimed actor Gary Oldman) who holds up production of the film Joey is currently working on, Tribbiani makes it to the wedding just in time to perform the super personal nuptials.

6. The One When Chandler Scored Joey an Audition – Season 6, Episode 18

Joey is still looking for acting gigs when he finds out that a former college flame of Chandler’s is directing the new Al Pacino film. Joey asks his pal to reconnect with Dana after ten years and try to get him an audition. Chandler steps up to the plate for his friend and asks Dana out for coffee to butter her up. When it comes up that other people have been asking her favors now that she is a big time director, Chandler has to switch gears and invite her for dinner, which you can bet that Monica had some issues with. Chandler keeps trying to casually name drop Joey, but Dana gets the feeling he is hitting on her. She’s not interested and Chandler uses her faux unrequited love to score Joey an audition. After all the hard work and super awkwardness, Joey totally flakes on the day and misses the audition.

5. The One When Joey Kissed Chandler on New Year’s Eve – Season 1, Episode 10

Chandler’s idea of having the reluctant gang swear to a “no date pack” on New Year’s Eve goes hilariously awry when everyone winds up at the party with a date anyway and ruins Chandler’s plan. But in the end, the friends all wind up dateless when the balls drops, leaving no one in the mood for a traditional midnight kiss… except for Chandler. As he pleads, “Would somebody kiss me!” Joey steps up (and puckers up), never wanting to see a buddy in distress, and offers one heck of a lip smacking smooch.

4. The One When Chandler Tried to Trick Joey Into Taking Money – Season 6, Episode 6

Sometimes you need a little help from your friends. With Chandler getting ready to move across the hall with Monica, he has to make sure Joey can get by. Chandler: “I’m gonna be moving out, so you are gonna be in charge of paying the rent.” Joey: “Right! And when’s that due?” Chandler: “First of the month.” Joey: “And that’s every month?” Chandler: “No, just the months you actually want to live here.” It quickly dawns on Joey that he won’t be able to afford his NYC apartment, but his pride won’t let him accept charity from his friend and soon-to-be former roommate. Chandler decides to rig some games so he can “lose” money to Joey to help him get by. Although the game “Cups” doesn’t fool Joey for long (though just long enough to lose all of his hard-won money to Ross), he could never fault his pal for trying.

3. The One Where Chandler Crosses the Line – Season 4 Episode 7 & The One With Chandler in a Box – Season 4, Episode 8

A true friend comes clean about any wrongdoings, even when that seems like the toughest thing to have to do. When Chandler kisses Joey’s girlfriend, Kathy (played by former Criminal Mind’s star Paget Brewster) after a late night intimate canoe haircut (it’s a thing) he finds ways to fight his guilt. Even after buying new Lazy-boys and an entertainment system, Chandler realizes that the only way to relieve his conscience is to tell Joey the truth. In an act of contrition, Chandler is told to stay in a box for the purpose of (1) to think about what he’s done, (2) it proves how much his friendship to Joey means, and (3) …it really friggin’ hurts! In the end, the gesture pays off and Chandler would certainly think again before lying to his bestie.

2. The One When Joey and Ross Took Naps Together – Season 7, Episode 6

What’s a nap between friends? Especially when you’re a little sleepy after a Die Hard marathon. When Ross and Joey find that they have accidentally fallen asleep together it’s super awkward, but eventually the two come to the conclusion that, hey, if it feels good, do it! Though it takes a little convincing for Ross to nap-up, Joey is fully willing to spear his friend with, “It was the best nap of your life! Admit it!” Soon enough, they were snoozing it up. Although not easily accepted by their peers, the two buddies didn’t see a problem with a little afternoon wink eye together and neither do we.

1. The One When Joey and Chandler Adopted the Duck and Chick – Season 3, Episode 21

When Joey sees a tear jerker of a story on the news about abandoned baby chicks, he decides it’s time for himself and Chandler to give parenthood a go by picking up a tiny bird. You’d think taking care of an ounce of fluffy cuteness would be easy, but the harsh reality soon hits. Late night feedings and constant care start to wear on the new “parents,” eventually forcing the reluctant roomies to attempt to return the chick. But after finding out what happens to foster fowl, Chandler brings the little one back, introducing the feathery friend to the important things in life, including Baywatch’s Yasmeen Bleeth, “a completely different kind of chick.” Joey’s happy because he was having second thoughts and we’re happy because the chick is super cute. And what’s one birdy buddy when you can have two? Enter… duck!