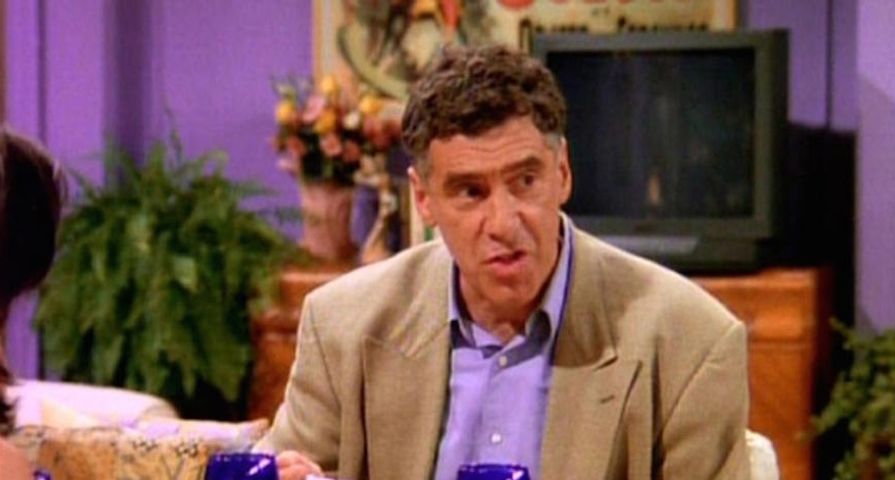 Even though it’s been over a decade since the season finale of Friends, it is just as popular today as it was back in the ’90s and early 2000s. The NBC sitcom ran for 10 seasons from 1994 to 2004 and made the careers of actors like Matt LeBlanc, Courteney Cox, Lisa Kudrow, Jennifer Aniston, Matthew Perry and David Schwimmer. Fans fell in love with the characters they played and their stories, including each of their parents who were introduced on the show at some point or another. Some played a bigger role than others, but they all showed up at one point or another! Here’s a look at 10 of the parents on Friends in a list that ranks them from worst to best!

We were really happy for Phoebe when she was finally able to reconnect with her dad, Frank Buffay, Sr., but let’s face it — he was a terrible father! Frank definitely falls into the category of ‘deadbeat father.’ When she finally mustered up the courage to confront him about abandoning his family, his excuse was that he was a terrible father. Lame excuse! He left not one, but two families and only decided to resurface at Phoebe’s grandmother’s funeral. He could never really pull his life together and just be there for his daughter. Phoebe gave him plenty of chances, but he did not deserve them.

Joey’s parents are mentioned several times throughout the series, but we only ever meet them once and it wasn’t under good circumstances! In the episode “The One With the Boobies,” Joey finds out that his father is having an affair on his mother. Of course, once he finds out he puts a stop to it, or at least tries. The obvious reason we don’t like Joseph Tribbiani is because he’s cheating on his wife, but he also seems like a selfish person because he doesn’t divorce his wife; he’d rather have his cake and eat it too.

Chandler’s mother, Nora Tyler Bing, wasn’t a mean mother to her son, but she seemed to be pretty absent. Always dressed to the nines and busy creating an empire out of her sultry novels, Nora wasn’t very ‘motherly’ to her son. She was more interested in taking care of herself and furthering her career than she was in taking care of Chandler. Let’s not forget that she hit on his friends; remember when she kissed Ross?

Fans of Friends only ever got to meet Gloria Tribbiani once throughout the entire series. She showed up in season 1, episode 13, “The One With the Boobies” when Joey finds out his father has taken a mistress. He convinces his father to stay loyal to his wife, Joey’s mother, because he feels bad for his mother, who he believes is an innocent, unknowing victim in all this. In a shocking twist of events, Gloria gets mad at Joey for intervening because she likes how nice her husband has been since he started cheating on her. It’s a kind of twisted way of thinking about a marriage — the only way she can get her husband to be nice to her is to let him cheat on her? This is not a great example to set for her son!

Charles Bing, also known as Helen Handbaset who plays the role of Chandler’s father, was definitely the most interesting parent to have appeared on Friends. A lot of Chandler’s problems stem back to his childhood and his parents, especially his drag-queen father. Even though he probably meant well, Charles was definitely more interested in pursuing his own life than he was in raising a son. He didn’t really take Chandler’s feelings into consideration when he began dressing up as a woman and took on an affair with the pool boy. Chandler recalled his father showing up to his swimming events in high school dressed as different starlets before he finally moved to Las Vegas to headline in the show “Viva Las Gaygas.”

Phoebe’s mother, Phoebe Abbott, wasn’t the greatest role model for her daughter considering she gave her twin daughters up. Phoebe was raised by her grandmother and spent the majority of her life thinking that her mother committed suicide. She was finally reunited with her mother in season 3 after Phoebe found a photo of her mother and tracked her down. At first she pretends she’s just a friend of her mother’s named Lily which is odd, but then eventually reveals herself as Phoebe’s birth mother and the two are able to strike up a relationship.

Judy was the queen of dishing out backhanded compliments, especially when it came to her daughter Monica. She did the ultimate parent sin — played favorites with her children! Judy Geller wasn’t usually outright mean to her daughter, but she wasn’t nice and caring either which made Monica extremely insecure, but it also turned her into a highly driven overachiever. At the end of the day, Judy wasn’t the worst parent on this list. She was present in her children’s lives and supported them, but she wasn’t a shining star either!

Sandra Green was Rachel’s kooky, fun, free-spirited mother, who also happened to be married to a wealthy man who she wasn’t in love with. Rachel was devastated when she learned her parents were getting a divorce, but Sandra seemed to be on cloud nine! She was finally free! It was heartbreaking to hear Sandra say that she’d married her “Barry” and spent all those years unhappy. Sandra was super protective of her daughter, but also seemed to simply want her to do whatever made her happy. She offered support and advice after Emma was born, and showed up to cheer her daughter on when she got her first real job as a waitress. She was definitely a good mother to Rachel!

Before we dive into why Rachel’s father, Leonard Green, lands so high on this list, let us just say that Leonard was a mean person, but he was a good father and he made us laugh. He was present in his daughter’s life, raised her well and even offered to support her until adulthood (although it came with a few strings attached). He’s not perfect, but we loved watching him interact with Ross because he was so protective. It seemed like no matter what Ross did he just couldn’t impress Leonard or get on his good side. We’re thinking it’s because, at the end of the day, no one would have been good enough for his daughter…Ross also didn’t make it easy for himself!

Jack Geller is the perfect TV dad. Not only does he dish out the classic corny “dad jokes,” but he also says inappropriate things, and he takes a very non-nonchalant attitude with everything, but also knows when to say the right thing. It’s obvious that he loves his kids, but also knows when to step back and let them make their own decisions. He offers advice when needed, but isn’t overbearing like Leonard. Like when he came over to comfort Monica after she broke up with Richard — it was super sweet and just what she needed!