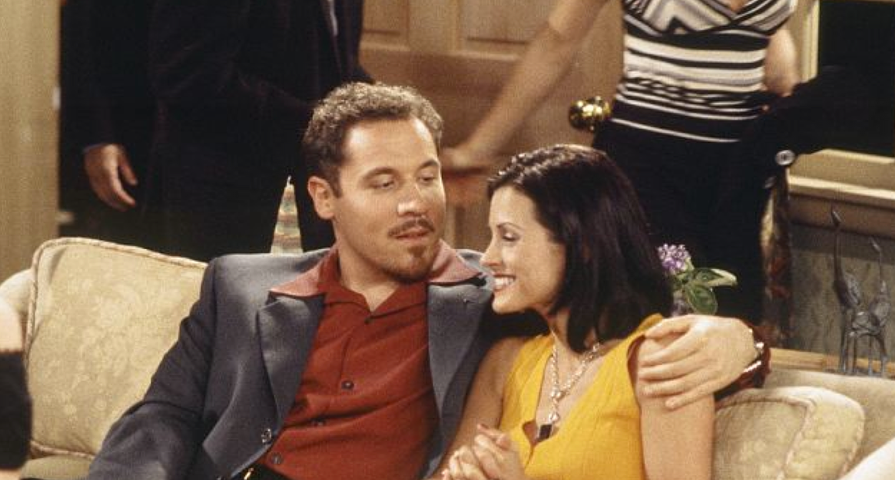 Friends has gone down in history as one of the most popular shows of all time. The sitcom ran for 10 seasons from 1994 to 2004, with one of the best ensemble casts starring Jennifer Aniston, Matthew Perry, Courteney Cox, Lisa Kudrow, Matt LeBlanc and David Schwimmer. Courteney Cox played Monica Geller, a high strung perfectionist who played a very motherly role on the show. As we all know now, she ends up getting married to fellow ‘friend’ Chandler Bing, but before that, she goes through her fair share of men! Check out our list of Monica’s 13 love interests ranked from worst to best!

Paul “the wine guy” shows up in the pilot episode and is first man we see Monica go out with. He started out seeming like a nice guy until Monica found out the line he used to get her to sleep with him…was just a line. He told her he hadn’t been able to be intimate with a woman in the past five years since his wife passed away. Unfortunately, when Monica went into work the next day and chatted with her co-worker, she found out he had used the same line on her!

This poet/bus boy turned out to be a real jerk! Monica dated Julio in season 3 while working at the Moondance Diner. Their relationship didn’t last long, only for the duration of one episode. Monica was initially physically attracted to Julio and the idea of him being a romantic poet, but when she reads a poem he wrote for her, she realizes he’s a huge misogynist. He writes a poem called “The Empty Vase” and when she thinks its about her being vapid, shallow and empty, he tells her it’s not actually about her, but rather all women!

Monica never actually went on any real dates with the coma guy, but she and Phoebe fought over him while he was a patient at the hospital. At the beginning of the episode, Phoebe encouraged Monica to whistle at the cute man walking on the street, so she does, but when he turned around, he was hit by an ambulance and put into a coma. Throughout the entire episode each girl goes to extreme lengths to take care of this man they don’t even know as they fantasize about how great he is. When he finally wakes up and they explain to him they’ve been taking care of him this whole time, his less-than-grateful attitude makes them realize there is nothing “special” about him and it turns them off him for good!

The date with Chip Matthews seems weird because he was Rachel’s boyfriend in high school, but it turns out Monica also had a crush on him back in the day. When she runs into him as an adult and he asks her out, she’s ecstatic because the guy who she could never get in high school now wants to date her. Rachel gives her blessing and Monica and Chip Matthews go on a date. The date doesn’t go so well and Monica realizes Chip is still the exact same guy he was in high school…literally. He still lives with his parents, works the same job at the Multiplex and hangs out with the same group of jocks from high school. The only good thing about this love interest is that she got the satisfaction of dumping him!

Monica and Rachel meet Jean-Claude Van Damme while visiting the set of Outbreak 2 and Monica reveals she has a huge crush on him, but she’s too shy to go talk to him. Rachel decides to ask him out on behalf of Monica, but he shows more interest in Rachel than in Monica and ends up asking Rachel out on a date. Even though Monica gives her blessing for Rachel to go out on the date, the two get in a fight about it later. When Monica goes out with Jean-Claude, she finds out the only reason he agreed to go out with her is because Rachel told him Monica would have a threesome with him and Drew Barrymore. This guy definitely wasn’t the one for Monica because a guy should never come in between a friendship, and all he seemed interested in doing was getting one of them into bed.

Ethan isn’t necessarily a bad guy, he just lands far up on this list because their relationship is totally creepy! Monica and Ethan both lie about their age when they first start dating. He tells her he’s a senior in college and she tells him she’s 22 when she’s really 26. After they sleep together, Ethan admits he lied about his age and that he’s really only 17 and a senior in high school! Ethan wants to continue their relationship, and if they were closer in age it might have worked out, but there’s no way Monica could ever date someone that young. This relationship was doomed from the start.

This relationship was kind of creepy considering Monica previously dated Timothy’s father, Richard Burke. Not only did she date his father, but she was crazy in love with him and he served as one of her biggest love interests in the whole series! Timothy Burke shows up in season 4 when he’s filling in as Monica’s eye doctor. She invites him to Thanksgiving so she can make a move on him, but when they kissed, he just reminded her of his dad. She eventually is forced to break up with him. If Monica hadn’t dated Richard, things could have possibly worked out between them, but he isn’t around long enough for us to find out.

Fun Bobby was one of Monica’s boyfriend early on in season 1 and 2. The first time we meet him is as Monica’s date on New Years Eve, but when he shows up he is totally miserable because his grandfather just passed away. The only reason he shows up to the party is because he couldn’t get a flight out to be with his family, so he comes to the party but definitely doesn’t live up to his nickname. When she gets back together with him in season 2, Monica learns that he has a drinking problem! She helps him give up drinking, but once he’s sober she realizes he’s actually a really dull person, so she starts drinking heavily around him to be entertained. He then accuses her of having a drinking problem and breaks up with her. The universe is trying to tell these two they are clearly not meant to be!

The problem with Alan was that everybody loved him…except for Monica. He is her boyfriend in the third episode of season 1. She doesn’t want to introduce him to the group because she’s nervous they will mock him like they do with all her other boyfriends and then she’ll be forced to break up with him. After going on a few dates, she quickly realizes there’s no spark between them, so she introduces him to her friends to find out what’s going on. Surprisingly, they end up loving him, but Monica still doesn’t feel it. When she breaks up with him, he mentions that it’s for the best because he didn’t like her friends which is a huge deal breaker!

Joey devises a plan to try and get back together with his ex-girlfriend, Angela, by going on a double date with her new boyfriend, Bob. He brings Monica with him as his date, but he tells Monica that Bob is Angela’s brother so that Monica will go with him. Monica thinks she is going on this date and being set up with Bob, so by the end of the episode, Monica and Joey end up breaking up Bob and Angela and taking each of them for themselves! We don’t get to know Bob well enough to determine how good of a match he is with Monica, but he’s definitely better than some of the previous guys on this list!

Richard is Monica’s first big love. Richard Burke is a friend of Monica’s father, who also happens to be their family ophthalmologist. He was 21-years-old older than Monica, but Monica was completely smitten with him. The two end up dating and have a pretty amazing relationship. Richard treats her well, is mature, and seems like the perfect match for Monica. There’s only one problem (and it’s a big one) — Monica wants to have children more than anything in the world, but Richard doesn’t want to have more children. If they had found each other earlier in life, things would have worked but the timing was off. They end up breaking up, only to get back together in a later season and the break up again.

Pete Becker’s relationship with Monica was really cute. There were definitely times when Pete seemed like he was far more into Monica than she was into him, but it came off as kind of sweet. He met Monica while she was working at the Moondance Diner and works hard to convince her to go out with him. He leaves her a tip for $20,000 which she rejects and finds out he’s a millionaire manager of a huge computer corporation! Even though Monica isn’t initially attracted to Pete, she’s intrigued by him. She eventually has a change of heart after thinking he’s met someone else and the two end up dating. Things go south when Pete all of the sudden is dead set on becoming the Ultimate Fighting Champion, and Monica isn’t able to watch him hurt himself so she breaks up with him. If Pete hadn’t gotten the crazy idea to change his profession, these two would have made a pretty awesome couple!

It’s no surprise that Chandler Bing lands in the number one spot on this list as Monica’s best love interest! Monica and Chandler’s relationship definitely has it’s ups and downs, but these two are totally solid and perfect for each other. The best part about their relationship is that underneath it all, they had a strong friendship to begin with so they know each other through and through. After a spontaneous hook up in London, Monica and Chandler end up dating, which leads to them falling in love. Eventually these two get married and in the series finale we learn that Monica finally gets her wish of having children when they adopt a set of twins.