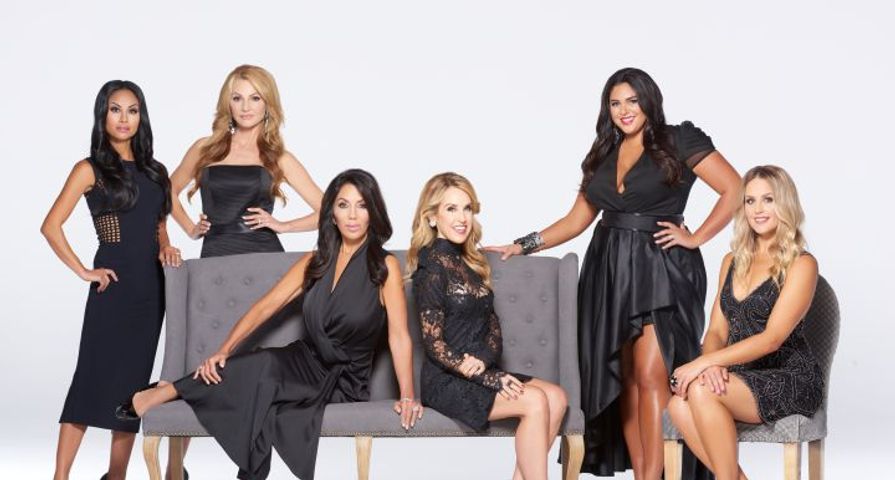 There have been whisperers about a new Real Housewives installment crossing over into Canada and we’re happy to announce it has finally arrived! The Real Housewives of Toronto premieres March 7 on Slice and is set to follow some of Canada’s wealthiest, most privileged and powerful women as they navigate Toronto’s elite social scene — dining at the top restaurants, attending lavish events in the city, shopping at expensive designer stores and traveling to luxurious destinations. In anticipation of the new series, here’s a look at 10 things we know so far about The Real Housewives of Toronto!

The Real Housewives of Toronto cast has finally been revealed and it consists of six women. There’s a “devout fashionista” named Kara Alloway, a “style entrepruener” named Roxy Earle, two businesswomen, Ann Kaplan Mullholland and Jana Webb, as well as a former model named Joan Kelley Walker, and an actress by the name of Gregoriane Minot.

In an interview with Flare, Erin Haskett, executive producer of The Real Housewives of Toronto talked about the casting process for the show. She said the women will come from different walks of life, but are all interconnected in some way or another. “We’re looking for women who are interconnected, who have enviable lifestyles, and who have full lives and are willing not to hold anything back. The important thing for me is that people have different points of view and that they are at different stages in their lives and have true relationships with one another. I can’t tell you [much more], but let me just say, I’m very excited about our Toronto Housewives.”

8. What are the Shows Settings?

The show will of course primarily be filmed in Toronto, but viewers will also get to see the ladies vacation in Canada’s famous cottage area, Muskoka, Ontario, and Barcelona, Spain. “I grew up in Ontario, and I know Toronto really well. We’re going to be showing that beautiful, luxurious side of the city. And we’re going to spend a little bit of time in Muskoka, but that’s all I’m going to say,” said Haskett, the executive producer.

Ann Mulholland is one of the extremely business savvy women cast to appear on the show. She’s a self-made woman who spends her days working as the CEO and president of iFinance Canada Inc. She also owns numerous properties across Canada, is an author, public speaker, media personality and public supporter of Fashion Cares. Mulholland is married to one of Toronto’s top plastic surgeons and lives in the affluent neighborhood of Forest Hills. Stephen and Ann have been together for 15 years and have eight children between the two of them.

Excited to announce I’ll be on The Real Housewives of Toronto! Tune in to the first episode March 7 at 10 p.m. on @slice_tv #RHOT

Roxy Earle is described as a Housewife with a “big personality and an even bigger bank account.” She’s the second wife of Toronto tech investor, Raghu. Upon first glance, many might assume she simply married into wealth, but she was actually a successful on her own accord before she got married. She was a marketing and advertising executive prior to walking down the aisle, and is now focused on building her own lifestyle brand. Earle and Raghu are still newlyweds and living in Yorkville, Toronto. She is the step-mother of two children and a spoiled dog named Lola, who she gifts with custom accessories and it’s own private chef.

The show’s self professed devout fashionista and goody two-shoes, Kara Alloway, is a wife, mother and member of Toronto’s social elite. The majority of her days are spent attending charity events, fashion shows, fundraisers and fulfilling her role as the Marketing Director of her husband’s company. Her husband is Graham Alloway, a successful attorney in the Toronto area. They’ve been together for 22 years and have three children together. Viewers can look forward to seeing her spend time with her family in their Hoggs Hollow home and Muskoka cottage. We can also expect to see Alloway butt heads with some of the other women on the show as she is a born-again Christian.

Joan Kelley Walker comes from the small town of Wilcox, Saskatchewan. She spent her childhood dreaming of the big city life and eventually moved to Toronto to pursue a career as a model. She’s now credited as a television host, producer, writer and humanitarian. Aside from her work, she’s best known in Toronto for being married to one of the richest men in Canada, Don Walker, CEO of Magna International. Joan and Don have two children together, and she is step-mother to two sons from Don’s first marriage. This elite couple have several luxurious properties including vacation homes in Muskoka, Colorado and Miami. We can look forward to seeing their annual summer party which draws in a crowd of over 700 guests at their Muskoka compound.

Jana Webb is a single mother who works hard to balance her life between family and work. She is the CEO of JOGA (Yoga for Jocks). Viewers shouldn’t expect to see Webb on the dating seen much as she describes herself as “not looking for Mr. Right, but rather Mr. Right Now.” She has over 300 certified trainers working for her to train thousands of athletes in the MLB, NBA and CFL. She is the definition of a self-made woman who isn’t afraid to show her disdain for women who’ve had their whole lives made for them by their husbands. We’re guessing this might be the fuse for a few tiffs this season. Compared to some of the other women on this life, Jana is relatively new to the social scene in Toronto, but with a roster of celebrity clients, we’re guessing she’ll do just fine.

This mother of two was adopted when she was only two weeks old and raised in Montreal, but now calls Toronto her home. She is a French Canadian actress who is the life of the party, but also extremely grounded when it comes to her family. She put her career on hold to raise her children. Grego is married to nightclub owner, Pierre Jutras, who runs the elite members only Spoke Club and Spoke on the Water on Toronto Island. Viewers can expect to see her interact with the other women who hold memberships to her husbands club, but her strongest friendship is with fellow Housewife, Jana Webb.

As the news release states, the show won’t be all about the glitz and glamour of Toronto. These women will have to navigate through some pretty sticky situations like the ups and downs of their relationships, careers and family life. The first trailer of this upcoming season has been released and it looks pretty amazing! Check it out here: