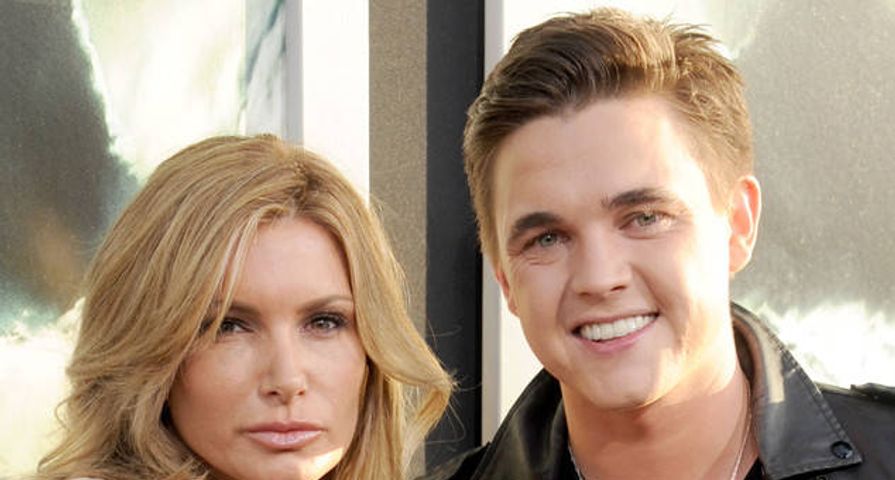 The ladies of the Real Housewives are among our favorite celebrities because not only do they live a life of luxury in the spotlight, but unlike other celebrities these stars are an open book, especially when it comes to their love life. It’s not surprising to learn that many of the past and present cast members have had their fair share of celebrity run-ins, but the fact that some of these turned into romantic relationships might be a little more surprising! Here’s a look at 11 shocking star-studded relationships from Real Housewives‘ past!

Only Andy Cohen would be able to get Real Housewives of Beverly Hills star, Kyle Richards, to share the story of how she lost her virginity. Remembering that Richards was a child star long before she became a reality star, it’s not that surprising to learn her first boyfriend was somebody famous! While on his SiriusXM show, Radio Andy, Richards said she lost her virginity to famous actor C. Thomas Howell, who’s best known for his role in The Outsiders alongside Rob Lowe, Matt Dillon and Patrick Schwayze. He was her first serious boyfriend. The two dated for five years and even attended prom together!

Leave it to Sonja Morgan to divulge incriminating secrets from her romantic past on National television. The Real Housewives of New York City star revealed to Andy Cohen during a game of “Would Morgan Date Him” that she’d once engaged in a fling with the famous Jack Nicholson. It’s hard to tell when Lady Morgan is exaggerating the truth, but she seemed pretty adamant about this one! When asked if she would date the actor she said, “Have I?” and then followed it up with, “He’s so much fun. Who hasn’t? Don’t forget how old I am and don’t forget those days before cell phones — those old answering machines.”

Former Real Housewives of Beverly Hills Brandi Glanville was more than happy to boast about her fling with Gerard Butler. She dished to Andy Cohen back in 2012 that Butler was the most famous person she’s ever had sex with besides her ex-husband Eddie Cibrian. She even ranked his bedroom skills and gave him an impressive “11!” In an interview with Howard Stern, Butler was faced with the question of whether or not Glanville’s remarks were true and he confirmed the two had a one-time fling. “It was a one-afternooner, but it was fun. She’s wild,” he said.

The latest revelation of past Real Housewives relationships involves Real Housewives of Beverly Hills star Kim Richards and the new POTUS Donald Trump! During the most recent reunion special, Richards confirmed a rumor that the two once dated. Andy Cohen asked her, “I heard a rumor that you once dated Donald Trump. Is that true?” She replied: “Yes, let’s not get into it. I had dinner with him. I don’t want to talk about the President.” Sounds like somebody has a tinge of regret!

This potential fling is a little more unclear, but in the summer of 2015 The Real Housewives of New York City star and Modern Family actor were linked romantically. The Skinnygirl founder was seen hanging out with Eric Stonestreet on more than one occasion including at a Los Angeles Dodgers baseball game and CAA Upfronts Celebration Party. It seems the relationship, if there ever was one has fizzled, but the two remain really good friends!

Eden Sasson doesn’t let age defer her when it comes to dating a superstar like Jesse McCartney. During an interview with Heather McDonald on her Juicy Scoop podcast, the Real Housewives of Beverly Hills star said she dated the singer without even knowing he was famous. “I had no idea who Jesse McCartney was. I just saw his eyes and this swagger that’s mine,” she said. When they dated she was 37 and he was only 23! They went on a few dates before going their separate ways.

This relationship doesn’t surprise us at all and honestly, they probably would’ve made a really cute couple had they lasted! During a crossover episode of The Real Housewives of Beverly Hills and The Real Housewives of New York City, Yolanda Hadid and Brandi Glanville traveled to the East Coast to meet up with fellow Housewives Carole Radziwill and Kristen Taekman. Radziwill confessed to the other ladies that she engaged in a minor fling with the “lovely” Hollywood actor and said: “We dated literally during the Eisenhower administration.”

Real Housewives of Atlanta star, Phaedra Parks, appeared on Andy Cohen’s Watch What Happens Live back in December 2016 alongside Criminal Minds actor, Shemar Moore. The two were more than flirty with one another and during the most recent RHOA reunion, Parks hinted that she and Moore remain in touch. In response to Cohen’s question about her dating life she said: “Well, you hooked me up with somebody and we chat from now and then.” He questioned her further and asked if she would date Moore, to which she coyly replied: “We’ll see….” Sounds like a potential fling is in the works!

During an episode of season on The Real Housewives of Potomac, the women played a game of “Shag, Marry and Kill” and it proved to be extremely revealing! Former Housewife Katie Rost shared the fact that she’d had a fling with Russell Simmons. She said even though the relationship didn’t work out, the two remain close friends. On the other hand, Real Housewives of Atlanta star, Cynthia Bailey reportedly received a proposal from the Def Jam co-founder! Peter Thomas shared these details with Essence during an interview when he said, “You know Russell Simmons proposed to her, she turned him down. People that I know, even exes, talk so well about her. She’s an independent person and I love that about her.”

We’re not quite sure how these two ever crossed paths, but the former Real Housewives of Orange County star has admitted to having a fling with the 98 Degrees singer! When confronted about the rumor that she had a fling with Nick Lachey after his relationship with Jessica Simpson ended, Lizzie Rovsek said, “This is true. I can’t lie about it anymore.”

Arguably one of the most surprising relationships of all is between controversial Real Housewives of Beverly Hills star Brandi Glanville and well-liked Hollywood actor, Ben Stiller. During an appearance on Watch What Happens Live, the Zoolander actor confirmed a rumor that he once dated the former Housewife. “It was short lived and it was fun, I wouldn’t characterize it as a relationship. It was a couple of dates and fun. I’m not sure my wife is even aware of that,” joked Stiller.