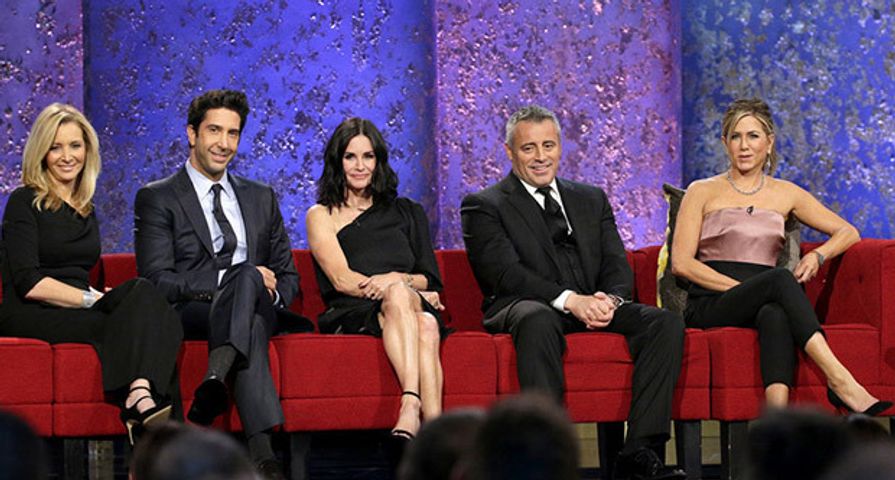 On Sunday night, NBC aired an emotional tribute to James Burrows on Must See TV: An All-Star Tribute to James Burrows. Hosted by Andy Cohen, the show brought the stars of various NBC shows like The Big Bang Theory, Will & Grace and, of course, Friends together to pay a special tribute to their beloved producer/director, James ‘Jimmy’ Burrows. But it was the cast of Friends who stole the show with their highly anticipated reunion — except for Matthew Perry who was tied up overseas working on another job. He did make an appearance in a pre-recorded video to introduce his friends up onto the stage. We were all so excited to see Jennifer Aniston, David Schwimmer, Matt LeBlanc, Courteney Cox and Lisa Kudrow all on a couch together again. Here’s 12 behind-the-scenes facts we learned from the tribute:

Courteney Cox said her favorite episode was “The One With The Blackout.” She loved it because David Schwimmer, who played Ross Geller, had to act out a scene with a cat stuck on his back as he ran around on the balcony. David commented about the experience stating that James Burrows had told him, “Just keep going with the cat on my back, he said just keep doing it, keep doing it until I yell cut, and he never did!” Jennifer, who was in the scene with him, laughed and said it went on for a long time before he could stop.

One of the best aspects about the show Friends for fans is that the cast is extremely close outside of the show, or at least they were while filming for a decade together. Andy Cohen asked them about this incredible bond and how it formed, to which Jennifer Aniston responded, “In the beginning it was not a hard thing, we really just wanted to hang out with each other. It was not a ‘we have to do this, ugh.’ We really just fell in love and adored each other instantly.”

Matt LeBlanc shared his favorite episode from his time on the series which was, “The One With George Stephanopoulos,” when the boys go to Ranger game in hopes of cheering up Ross. At the game, Ross gets hit in the face with a puck and so they all have to go to the emergency room. Matt said that the moment when Joey pretends a puck is flying at his face while they are waiting for Ross to see a doctor was the best, and it’s all because of James Burrows who gave Matt the cues for coming up with that joke. Plus he loved how mad David Schwimmer was!

The question came up of who was called to audition and the cast didn’t say much, but Lisa Kudrow said she was asked to come in and audition for Jimmy. Lisa asked the others, “did you?” and David Schwimmer said, “I remember meeting with Jimmy before,” which Lisa said “that’s not auditioning.” When no one else admitted to having to audition she laughed and turned to Jimmy and said, “well I did, so thank you.” Sounds like Lisa Kudrow was the only one who had to work for her role!

When asked about auditioning for roles on the show, Jennifer Aniston revealed that when she was first called and asked to come out she was told to play the role of Monica and Courteney Cox was called in for the role of Rachel. Jennifer said that they ended up switching because they both thought the other was better for the part. It’s hard to imagine these two swapping roles!

When Jennifer Aniston was asked if the episode when Rachel gets drunk and marries Ross in Vegas was her favorite episode, she laughed and said that was a very fun episode to film, but admitted, “I always loved the flashbacks when we had fat Monica and Rachel pre-nose job and Ross with his afro.”

Kudrow said that Burrows liked to relate his various characters together from different shows, drawing on their similarities. He told Kudrow that Phoebe was his new Reverend Jim, who was played by Christopher Lloyd on Taxi and that LeBlanc was ‘Danza.’

Andy Cohen asked the cast who had the best chemistry together and they all agreed that the whole cast in general worked extremely well together. But Courteney Cox spoke up to mention that the three girls were especially close, during the 10 years of filming Friends they had lunch together every single day and ate the same meal everyday, which was a ‘Jennifer salad.’ Jennifer shrugged off the compliment, but Cox insisted that Jennifer Aniston makes the best salads, it’s all in the way she tossed it, “she has a way with it.”

Andy asked David Schwimmer about his time directing 10 of the Friends episodes and if Jimmy ever gave him any advice. David responded, “who, Jimmy? No, I mean look I asked if I could watch him and follow him and he graciously took me under his wings.” Some fans might not know have even known that David Schwimmer directed any episodes, but we do now!

Andy Cohen addressed a rumor that swirled around stating each cast member had to sign a contract and promise not to sleep with one another. They all kind of looked puzzled and David Schwimmer made a subtle comment hinting at something by saying, “well, that was broken.” The end result: apparently this isn’t true because Lisa Kudrow laughed and said, “I was not asked to sign anything.”

When the cast first got together to film for the show, James Burrow really encouraged them all to bond off set so it would improve their chemistry together. Lisa Kudrow said that he would offer up his dressing room to the cast (because it was the biggest, of course) to hang out in and gave them his poker table to use as a bonding exercise. This eventually turned into an episode called, “The One With All The Poker.”

1. All Used to Watch Episodes Together

Our favorite fact that surfaced from the James Burrows tribute was that the whole cast used to hangout at each other’s houses during the first season of filming to watch the episodes together. Joey said, “We would all watch each other, like scenes you weren’t in, you would watch and try to think of ideas for each other. Everyone was real supportive of each other.” Jennifer added that they would offer up notes or suggestions, not in a criticizing way, but to support one another and work as a team on improving the show. Lisa Kudrow said the idea came about when Courteney Cox told them about her time on Seinfeld and that the cast would all help each other.