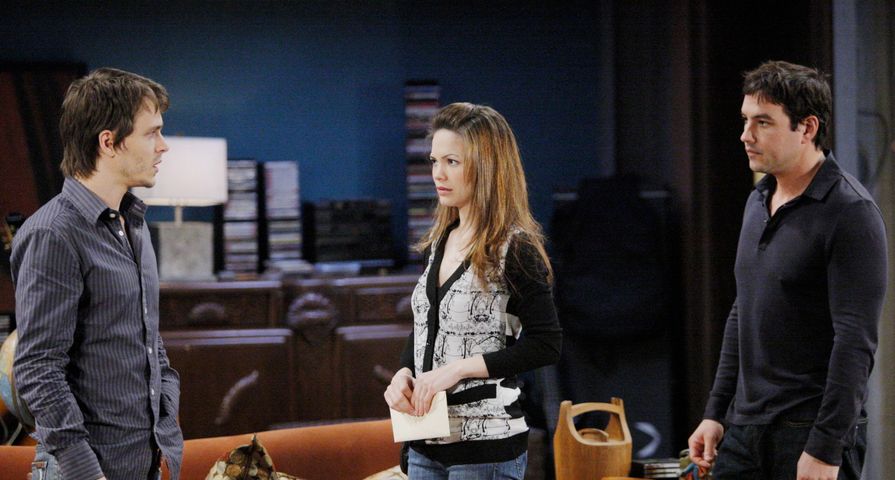 Boy meets girl, they fall in love, and live happily ever after! Except when it comes to the land of soaps. In daytime drama things get far more complicated than that. Sometimes boy meets girl, they fall in a love, and an ex returns to town. Sometimes girl meets boy and realizes that true love really comes in the form of her best male friend. Love triangles certainly make things far more dramatic in the land of soaps and General Hospital (GH) is no exception to this rule. Below are seven of the best GH love triangles.

Brothers always should come first, but that isn’t always the case. When Morgan returned to Port Charles in 2013, he brought along toting girlfriend Kiki Jerome. The two moved in with his brother Michael and this is when things got a little sticky. Kiki and Michael would bond, leaving Morgan in the dust. The good news for Morgan is that Kiki would eventually come back to him and Michael would move on to some other ladies in the little town.

Women who like to break up the bond of brothers seems to be an ongoing theme in the land of GH. Elizabeth Webber, Lucky Spencer, Nikolas Cassadine, and Emily Quartermaine were besties and part of Port Charles’ teen scene in the late 1990s. Elizabeth would hook up with Lucky, get married, and build a family. Meanwhile, Em and Nik would embark on a roller coaster romance that ended the night Emily was murdered in late 2007. Emily’s death brought Nikolas and Elizabeth closer and they became BFFs. Unfortunately, they got a little too close for comfort at one point, having an affair while Liz was still with Lucky.

In the late 1980s, Port Charles was all about the mob scene and super spying! Nothing has really changed over the years except for the dynamics between Anna Devane, Robert Scorpio, and Duke Lavery. When Anna fell in love with Duke way back in the day, Robert was worried about Lavery’s involvement with the mob and saw Anna in a romantic light. Anna was quite smitten with Duke and despite her strong relationship with her baby’s daddy, she ended up choosing Lavery in the end.

Super couple Frisco and Felicia seemed to have a pretty interesting recipe for love. They would come together; Frisco would take off on a spy mission; Felicia would get over him and find a new love; Frisco would return; Felicia would go running back to him! Therefore, this love triangle between Felicia, Frisco, and Mac has been an ongoing saga throughout the years. The good news is that in 2013 it officially ended when Felicia put her foot down and let Frisco know she was tired of his antics. She chose Mac and the two are seemingly living their happily ever after. If that is even possible for a soap opera couple.

The love triangle saga between Brenda Barrett, Sonny Corinthos, and Jasper Jax went on for what seemed like forever in the early 2000s. In all honesty it seemed like Brenda was torn between both men because genuinely loved each of them. Sonny was the mob boss with a tender heart of gold, while Jax was a clean-cut good guy with a sense of adventure. After a ton of chaos within this love triangle, Brenda would eventually leave Port Charles and both handsome men behind in 2003.

This love triangle seems like the never-ending story and it will be very interesting to see how the real Jason’s return will stir the pot. Jason Morgan has had some incredible romances with both Elizabeth Webber and Sam McCall. He has children with both these ladies and a ton of history. At some points in his life he’s chosen Liz over Sam and vice versa. In fact, most GH fans are divided on who Jason should really be with. There are those that are Team Liz all the way and others who land on Team Sam. Maybe this is a love triangle storyline that will just keep continuing as the years go by. Both women have incredible chemistry with Jason.

Speaking of ongoing love triangles, this one helped launch the Luke and Laura super couple legacy. In fact, the animosity around Luke Spencer stealing Laura Webber from Scotty Baldwin continued over the years and was almost always brought up in situations when both men were fighting. Luke and Laura would move on to build a family and have an on-again/off-again relationship. Scotty carried a torch for Laura as the years would go by and the two even got married in 2013. Sadly, they divorced months later when Laura went traipsing off to see an ill-stricken Luke. Some things never change.