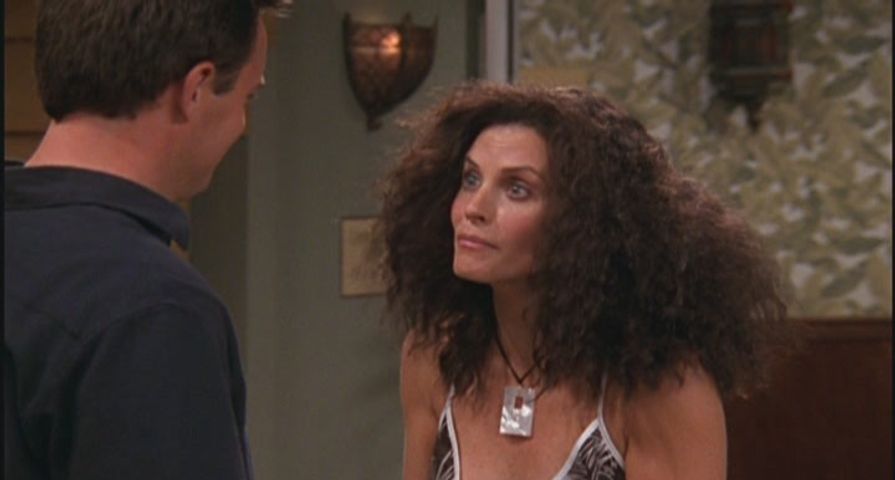 Among the six characters that made up the stellar main cast of Friends, Courteney Cox played the uptight, wildly competitive, clean freak that is Monica Geller. You may not immediately think of Monica when you aim to choose the funniest member of the friends (granted, she had some pretty tough competition), but when you stop to think about it, she had her fair share of laugh-inducing lines and hyper-hilarious moments. Check out this list for 10 of Monica’s funniest moments on Friends.

10. When She Teaches Chandler About Women’s Erogenous Zones

Chandler Bing wasn’t really a ladies man on the show and that went all the way from picking up women to pleasuring them between the sheets. When Chandler is desperate to satisfy his girlfriend, Cathy (who also happened to be Joey’s ex-girlfriend which made Chandler feel inferior to his roommate’s Don Juan ways), Chandler heads across the hall to ask for some guidance from his female friends. Monica is happy to oblige and what results is an enthusiastic lesson that ended up being one of her most hilarious and memorable moments. “Seven, seven, SEVEN!!!”

9. When She Dressed Up In Emily’s Wedding Dress

Have you ever felt jealous that your friend or family member was getting married instead of you? Have you ever wished that you were the one heading to the altar? Have you ever tried to make yourself feel better by wearing the bride’s dress around your apartment while doing chores or hanging out with your wedding dress-clad friends? Wait … what?! Yup, that’s just what Monica did when her brother, Ross, was about to get married (again) and she was tasked with picking up the special dress for her future sister-in-law. Watching her welcome imaginary guests and thank them for attending her fictitious wedding while wearing gloves to wash dishes is just too funny!

8. When She Tackles a Fellow Bride-to-Be for The Perfect (Discounted) Wedding Dress

When Joey manages to snag himself and his pals tickets to “Dick Clark’s New Year’s Rockin’ Eve,” it’s a dream come true and once in a lifetime opportunity for Monica and Ross who have idolized the program their entire lives. But when the Geller siblings can’t seem to manage to get themselves in front of the cameras, they decide to go back to their epic “routine.” A dance they put together as a younger duo, it’s just as nerdy, awkward, and as funny as the brother and sister themselves. And it did indeed manage to get them on camera, unfortunately for them, it would be on the program’s blooper reel.

6. When Tries to Seduce Chandler While in the Pribe of Libe (er, Prime of Life)

No one likes to be sick. Sometimes we just try to ignore it and pretend like everything is fine and dandy health-wise. Monica, the queen of stubbornness, hands-down flat-out refuses to admit that she’s caught a vicious cold. To prove it, she attempts to seduce Chandler in what is undeniably the most unattractive attempt of her life, including a ratty robe, runny nose, and a body reeking of Vicks Vapo Rub. Or, sorry, attempt of her “liiiiibe.”

5. When She Had HUGE Humidity Hair

Anyone with even a little curl to their hair knows what effect humidity can have on your ‘do. While vacationing in Barbados, Monica is hit with the biggest humidity hair ever witnessed on screen. It’s beyond big. It’s gigantic, huge, humongous, and absolutely hilarious. That is, right up until she decides to deal with the problem by opting for one of the worst tourist traditions of getting her hair braided Caribbean-like. No. No. No. Ha! Ha! Ha!

4. When She Played SUPER Competitive Ping Pong with Mike

3. When She Got a Massage from Phoebe

When Monica gets a massage from her masseuse friend Phoebe, Monica enjoys it. Like, she really enjoys it. Enjoys it to the point of sounding like she’s in the midst of another pleasurable activity. Ya know?! *wink, wink, nudge, nudge* The way she vocalizes her enjoyment of the massage is so awful and awkward and hilarious, it’s almost too much to handle. It also might make you super-aware of what you sound like the next time you’re lucky enough to get a massage yourself.

2. When She Danced With the Turkey on Her Head

Who can say they haven’t tried to cheer up a friend by stuffing their entire head inside of a thanksgiving turkey?! And who hasn’t added giant classes and a little cap to top off the look? And if you didn’t end the spectacle by doing a snazzy little shake and dance, well then you were just doing it wrong. Chandler Bing never had an easy time on Friends when Thanksgiving rolled around, it being the day that his parents chose to inform him of their impending divorce when he was just 9 years old. When old memories only make him more miserable, Monica decides to cheer him up with a turkey on her head, of course, in what became one of her silliest and most memorable moments.

Every one of the Friends developed their own catch phrases during the shows run and Monica Geller was no exception. Not only a stubborn lady and a clean-freak, she was also well known by her friends and fans for her know-it-all ways and not at all known for her volume control, especially when she was feeling enthusiastic or vindicated. Whenever that happened (and it happened often), Monica could be heard to – loudly – declare “I KNOW” whenever she could, to whoever she could, about whatever she could. A bit much? I KNOW!