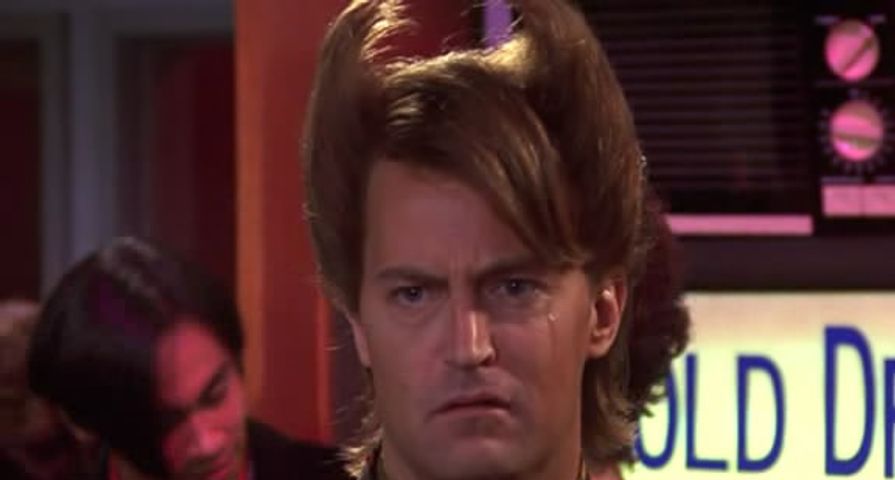 If you’ve ever watched just one Friends episode, then you’ll know that Chandler Bing was the master of sarcasm and snarky one-liners. Played by the wildly funny Matthew Perry and with a come-back for any and every situation, he could always be relied on for a laugh. He had the perfect comedic timing and quick wit to pull off the character and make it his own. He was given some of the prime scripted jokes and pulled them off flawlessly every time. Choosing just 10 is nearly an impossible task, but here goes…here are 10 of Chandler’s funniest moments on Friends.

When Chandler and Monica decide to keep their relationship a secret from their friends, they really couldn’t have expected it to be a long-held secret. When Rachel and Phoebe find out the big news, they decide to mess with their friends, despite Joey’s desperate requests to just get everything out in the open. Thankfully, that’s not the route they chose to go and fans of the show ended up with a beyond-hilarious skit of Chandler and Phoebe attempting to seduce each other in the hopes of pushing the other to the point where they must confess what they know. A scene mastered by two brilliantly funny actors, it’s a scene that was one of Chandler Bing’s best.

Everybody has something about them that makes them special. For Chandler Bing, it’s his nubbin. For those who don’t know, a nubbin is what the Friends called Chandler’s third nipple after finding out about its existence during a wild secret-telling-spree that shot through the group one day. A source of jokes and teasing, Chandler eventually has the third nipple removed, but soon worries that he had accidentally rid himself of the true source of his (funny) powers. Dun, dun, duuuuunnnn!

8. Chandler is “Hopeless and Awkward and Desperate for Love”

Chandler Bing isn’t exactly Casanova, Don Juan or Juliet’s Romeo, but that doesn’t mean he doesn’t want to find love. Dating disasters, a couple failed relationships, and a general cluelessness when it comes to the opposite sex doesn’t deter him, but that doesn’t mean it’s easy sailing. When he can’t even keep the notorious Janice by his side, he sadly (yet hilariously) bursts out, “I’M HOPELESS AND AWKWARD AND DESPERATE FOR LOVE!” Oh, Chandler, we love you!

Helping a friend move is rough at the best of times and downright sucks at the worst of times, but it’s a rite of friendship and a duty to help your buddies when they need big pieces of furniture transported by hand. So when Ross finds himself with a new sofa and is unwilling to pay the ridiculously large delivery charge, it’s up to Rachel, Chandler, and Ross to get it to the apartment themselves. The only problem being the windy staircase that the three need to navigate. Ross helpfully guides his friends with, “Pivot! Pivot! PIVOT!” But Chandler doesn’t quite appreciate the ongoing directions. “Shut up! Shut up! SHUT UUUUUUUP!” … “What, what do you mean by ‘pivot’?”

Chandler hates it when people fight. Like reeeeally hates it, stemming from his parents’ divorce when he was just a kid which is when he learned to use humor as a distraction. While attempting to head off on a ski trip, the gang is stranded and Ross has to come to their rescue, much to Rachel’s disapproval. When the newly broken-up pair begin to bicker, Chandler jumps into a …well… weirdo dance in order to distract them. It’s so jarring, Phoebe begs them to stop: “Look at what you’re doing to Chandler!”

When Ross brings his college bestie home for Thanksgiving with him during a flash-back episode, the Gellar’s are pleased to meet their son’s friend. However, being that it was a flashback to the ’80s, Chandler comes in sporting a hairstyle that could only come from a decade with such a signature style. His “Flock of Seagulls” haircut is as hilarious as Chandler.

Chandler made his way to the Gellar family Thanksgiving on more than one occasion and each time sported a new style that matched the times. Leaving behind his “Flock of Seagulls” wild ‘do, he instead shows up in a flashy Miami-vice inspired suit, complete with neon and pastels and some wicker sandals. When he takes a knife to the foot courtesy of Monica, chopping off his baby toe and ending up in the hospital, the doctor reads the chart: “It says here that the knife went right through your shoe.” To which Mr. Gellar aptly replies, “Of course it did. They’re made of wicker.”

In real life, Matt LeBlanc worked as a carpenter before joining the cast of Friends to find himself fame and fortune. He put his handy skills to use when his character, Joey, decided to make a shelving unit for the apartment he shared with Chandler. Unfortunately for Chandler, Joey didn’t exactly share Matt LeBlanc’s pro skills and while drilling away, Joey ends up drilling right through the wall into Chandler’s room, narrowing missing the freaked-out roomies head. Joey: “Oh! Did I get you?” Chandler: “No you didn’t get me! It’s an electric drill! You GET me, you KILL me!”

2. Chandler Stuck in an ATM Vestibule With Jill Goodacre

One of the earliest episodes that had fans falling in love with Chandler Bing was the one with the big blackout. While the rest of the gang is back at the apartment riding out the lack of lights and electricity, Chandler finds himself trapped in an ATM vestibule with model Jill Goodacre. Chandler’s attempts to be cool around the beautiful woman aren’t exactly suave, but his bumbling ways ends up winning her over right along with the audience.

1. Could Chandler BE Any More Sarcastic?!

Has there ever been a character more sarcastic than Chandler Bing? It was so much a part of his character, that when the gang decided to make New Year’s resolutions, Chandler’s was to tame his snarky ways. It didn’t go so well. And honestly, who would want Chandler to keep those wild one-liners to himself when he comes up with things like: “I’m glad we’re having a rehearsal dinner. I rarely practice my meals before I eat.” Or: “”…tell him to email me at www-dot-ha-ha-not-so-much-dot-com.”  Or: “I say more dumb things before 9 a.m. than most people say all day.” Dumb? Or funny?!