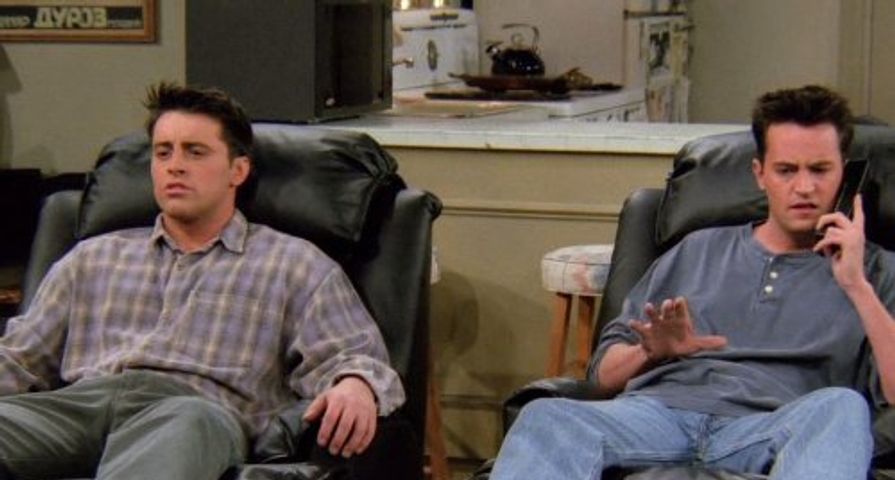 Friends was one of the most popular television shows during the 90s and into the early 2000s, ruling the sit-com world for 10 years. The shows success stemmed from the hilarious cast dynamic. Together they were like a well bonded close-knit family, but even on their own, each character had a unique and special relationship to one another, and in the end all came together as one big Central Perk gang. One of the best duos on the show was the ‘bromance’ between Joey and Chandler. These two characters were inseparable throughout all 10 seasons and their comical brotherly love kept audiences roaring with laughter. It was hard to narrow down, but here are some of the best moments between Chandler and Joey.

Ross is unemployed and has taken it upon himself to broaden Joey’s career. He has Joey writing screenplays, but Joey can’t seem to focus, especially when Chandler is distracting him by playing games in the background. Joey eventually gives in to his short attention span, abandons his screenwriting duties for the day and co-creates the game fireball with Chandler.

Joey starts making money when he gets a new big acting gig on Days of Our Lives, so he goes out and buys some things for the apartment like a big screen TV and two leather recliners, one for him and one for Chandler. Chandler is so excited, he jumps up and down and says, “which one is mine?!” and Joey says, “whichever one you want, buddy.” The two recline back at the same time, pull out the footrest and simultaneously let out a relaxing sigh. Ahhhhh. They end up spending the rest of the episode glued to the chairs in a television daze. Joey and Chandler spend so much time together in the following episodes, sitting side by side in their matching barcaloungers that Joey even goes on to name his Rosita…until Rachel ends up breaking his chair in season seven.

Joey and Chandler are trying to sell their ‘home crafted’ entertainment center when a stranger who is pretending to be interested bets him that a grown man can’t fit inside the cabinet. To prove him wrong, Joey climbs in, but finds himself locked inside while the guy steals all of their furniture. In the end, Joey ends up trading their entertainment center (the only thing left in their apartment) for a canoe and some rusty outdoor patio furniture. At the end of the episode they both sit in their canoe in the middle of their empty apartment. Joey is comletely content and Chandler sits in the background moping about the loss his best friend just cost him.

9. When They Ride Into the Apartment on the Dog (Season 4, Episode 12)

Monica and Rachel challenge Joey and Chandler to a trivia game with questions about the opposite ‘duo’ and, as the game goes on, the stakes for winning grow. Eventually, Monica gets so competitive that she bets the apartment! Unfortunately, her and Rachel then go onto to lose the game leaving them no choice but to forfeit the apartment to Joey and Chandler. When moving day comes around, Joey and Chandler come over to claim their prize. The door swings open, in comes Joey and Chandler riding Pat the dog while Chandler eats a sandwich and Joey salutes to the sky. These two know how to make an entrance!

The whole gang makes a pact (which they all end up breaking) to not bring dates to their New Years Eve party at Monica’s apartment. At the very end of the episode, they are deciding who is going to kiss who and Chandler starts chanting, “somebody kiss me it’s midnight!” To shut him up, Joey grabs his face and plants a big smooch on his lips, making the perfect ending to the episode.

Joey’s has a big break in his acting career, so he decides to move out and lease a nicer apartment uptown. The whole process is very sad for the two of them who have lived together for so long and used to spending all their time with each other. In the last scene, Joey leaves the apartment after saying his final goodbye, runs back in immediately after the door shuts and gives Chandler a big emotional hug. Aww.

Joey gets his eyebrows waxed in order to get an acting gig, but after going to the salon he chickens out when he realizes how painful it is and leaves after only getting one eyebrow waxed. He goes to Chandler seeking help, and after some teasing remarks (I mean, how could you not!) Chandler fixes his eyebrows so that they both look somewhat ‘normal.’ Afterwards Joey says, “That was a pretty girly hour we just spent, we should probably do something manly to make up for it…” but being the close friends that they are, both look at one another and Joey says, “Curl my eyelashes!”

Joey and Chandler want to babysit Ben because Joey thinks being out and about in the city with a baby will help them meet women. While riding the city bus, sure enough they meet two women and after convincing them to go on a date, Joey and Chandler get so preoccupied with talking to the women they realize they got off the bus without Ben. When they finally hunt down Ben at Human Services, they can’t figure out which child is Ben — is it the baby wearing the shirt with ducks or clowns? Eventually, they decide to flip a coin and Joey famously says, “ducks is heads because ducks have heads!” Chandlers responds with, “what kind of scary a– came to your birthday?!” In the end, despite Joey and Chandler’s attempts to get Ben back unnoticed, Ross still finds out when he goes to change Ben’s diaper and it says, “property of human services.”

Monica feels guilty after Chandler finds out that she had a bachelor party and he didn’t. So she organizes a last minute party with a stripper, but it’s just Joey and Chandler at the party and the two have to tackle an awkward situation when the stripper shows up and ends up being a prostitute. In the midst of it all, Joey confesses that he misses the two of them hanging out all the time. He smiles and says, “I miss this.” Him and Chandler have a little moment and agree to start spending more time together despite the fact that their friendship has changed now that Chandler is married and lives across the hall with Monica.

After seeing them on television, Joey buys a chick for him and Chandler. But they soon realize how much work it is, so they go back to return the chick but end up adopting a duck too. In a hilarious twist of events, the two become parents to the chick and the duck and their new farm animal friends become a comical addition to the show making appearances in various episodes in the following seasons.

Ross has invited the gang to an important black tie event at the museum where he’s making a speech and he’s desperately trying to get everyone ready, but everyone is facing their own dilemma on why they can’t get dressed on time. The best act in this episode is between Joey and Chandler. Chandler is mad at Joey because he stole his chair when he got up to go to the bathroom and then refuses to get up when Chandler asks to have his seat back. The two bicker back and forth, and finally Joey stands to go get ready, but childishly takes all the cushions or as Chandler would say, the ‘essence of the chair’ with him so that he can’t sit back down in the chair. Chandler retorts back by stealing and hiding all of Joey’s underwear. But Joey gets the last laugh when he puts on all of Chandlers clothes, walks into the apartment and mockingly says, “Could I BE wearing anymore clothes?” It’s hands-down one of the most memorable scenes between Joey and Chandler.