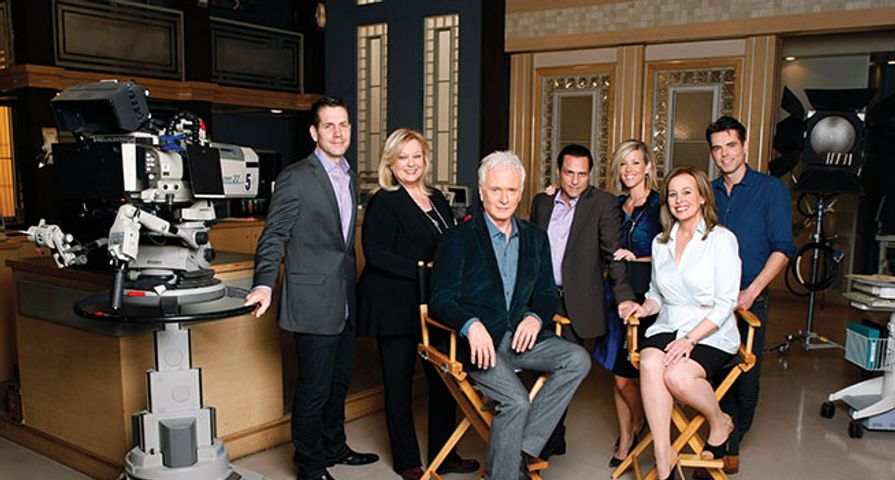 General Hospital is arguably the most popular soap opera show in America right now. The series began back in the early ’60s and is still going strong today which is an incredible feat in the soap opera industry as many shows from the past have been canceled. Not only is General Hospital still on air, it’s making history! The show has gone down in the Guinness World Records as the longest-running American soap opera production and third longest-running drama. General Hospital has been so successful in its time, it even garnered multiple spin-offs like Port Charles, General Hospital: Night Shift and General Hospital: Twist of Fate. With a strong and dedicated fan following, GH holds the record for the most Daytime Emmy Awards with a whopping 13 wins! With such a long running series, a lot is known about the show, but we did our best to dig up 10 tidbits of information that some fans might not know about this beloved daytime soap:

General Hospital was created by husband and wife soap opera writers, Frank and Doris Hursley. The series premiered on April 1, 1963 and when the show was first created it was supposed to be called “Emergency Hospital.” In the beginning years of the show, all of the storylines were set on the seventh floor of ‘General Hospital’ in an unnamed city. At the time, each episode was only 30 minutes long and there was no such thing as ‘Port Charles.’ The soap opera was merely set in ‘General Hospital,’ but in the ’70s the producers coined the fictional town of Port Charles. In 1976 the series was expanded from 30 minutes to 45. In 1978 it was bumped up again and became an hour long production. “They had this concept of the show that it was like a big wagon wheel — the spokes would be the characters and the hub would be the hospital,” said John Beradino (who played the character of Steve Hardy) in an interview with Entertainment Weekly.

Executive producer, Gloria Monty is to thank for one of the most famed soap opera couples, Luke Spencer and Laura Webber. The wedding of Luke and Laura aired back in 1981 and has gone down in history as the highest rated hour in American soap opera history. The episode reeled in about 30 million viewers and TV Guide ranked it as part of “100 Most Memorable Moments in TV History.” Luke and Laura had such a strong fan following that their presence is still felt on the show today, and both actors played their characters on and off for many years. In fact, after Laura’s “death” in 1982, the writers suggested that the character of Luke Spencer commit suicide, but executive producer Gloria Monty refused to pull such an emotional stunt on her dedicated audience.

Back in the early days of General Hospital when Steve Hardy and Audrey March got married for the first time, their wedding was facilitated by a minister. The actor who played the character of the minister was Rachel Ames’s father, Bryan Foulger. Also, one of the reasons General Hospital sticks out from the rest of the soap opera industry is their celebrity cameos! All fans will remember when Elizabeth Taylor made an appearance on the show, but the secret is that she was never actually on set with the other actors! Her scenes were spliced together to make it look like she was there.

Back in its early days, General Hospital struggled to make ends meet. The production was costly and it takes a while for a successful show to gain its footing in the industry. In the early year, the budget dwindled fast and John Beridino (Steve Hardy) had to take a pay cut from his $1,500 weekly salary in order to build production sets. Talk about taking one for the team! Production costs have been an issue for the soap opera since it began back in the ’60s. Ratings dip and rise and sometimes it seems like the costs outweigh the gains, but ABC has decided to stick it out with this popular soap and it’s doing quite well now. The cast definitely aren’t taking any pay cuts, in fact the veterans on the show make a pretty penny for their work!

The song “Elizabeth” that Lucky Spencer sings to Elizabeth Webber on multiple different occasions was actually written by Jonathan Jackson, the original actor who played Lucky Spencer. Jonathan Jackson is not only a talented actor, but a musician as well! He now plays an important role on the musical drama, Nashville as a singer, producer and songwriter. But, back in the day ABC made him sell them the rights to his song “Elizabeth” which is why it is still featured on the show and why actors in the character of Lucky since Jackson left the show have been able to sing it.

3. The Show was Almost Cancelled

In 1978, the ABC network gave the show six months to increase their ratings by two points or the show would be cancelled. Thus, General Hospital brought in their first executive producer, Gloria Monty. On her first day of the job, she reviewed the last four episodes, decided to scrap them and have them re-taped which cost approximately $100,000. It was a big financial loss, but the show made a huge comeback after that — one that was totally unheard of. It went from being close to cancelled to being the most watched daytime drama in 1979. Today, General Hospital still stands as the number one show on daytime television! According to The Hollywood Reporter, in 2015 the show was drawing in approximately 3 million viewers daily.

It’s no secret that the soap industry is extremely close knit and sometimes there’s even crossovers between shows. When All My Children was cancelled some of their production sets were given to General Hospital for reuse. For example, The Pine Cone motel is now a seedy motel near the Port Charles docks and Erica Kane’s penthouse became Ava Jerome’s New York penthouse. Also, the Chandler Mansion is now Anna Devane’s house, the Pine Valley yacht club became the Port Charles skating club and Ryan Lavery’s cabin was repurposed into a multipurpose set.

1. Robert Scorpio Wasn’t Supposed to Stay on the Show

When Tristan Rogers was cast in the role of Robert Scorpio, he was originally written into the General Hospital script as a guest appearance. He was hired on for two days and did such a great job the character stayed with the show for 12 years! Much of his popularity is thanks to his character’s involvement with “supercouple” Luke and Laura.