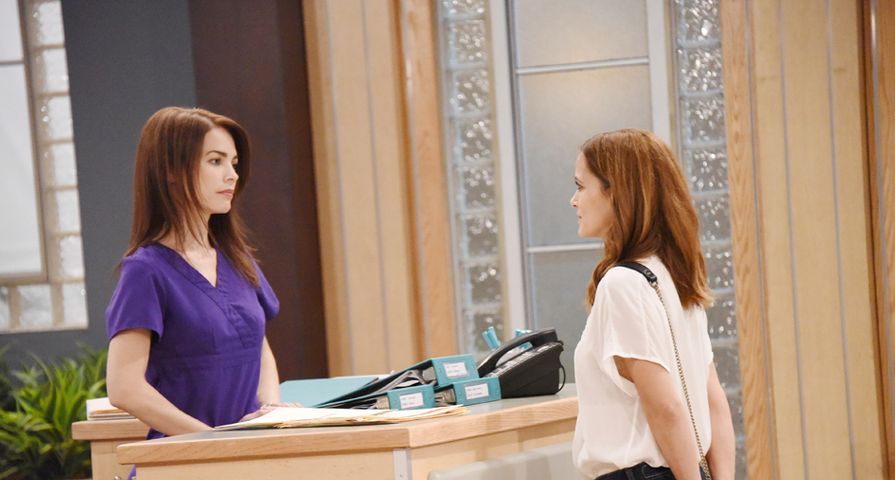 Hold onto your hats General Hospital (GH) fans because this week is going to be incredible! Not only is the GH serial killer going to add another victim to his/her list, but they shall also be revealed. Learn more about this revelation (plus a wedding, a blackout, a sister brawl, the return of Spinelli, and an arrest) in the GH spoilers listed below for the week of August 29th.

While Naomi tries to reason with Heather Webber, she simply cannot. In the end, mommy Heather ends up spilling the Liz/Hayden sister secret to Franco this week. Speaking of those two, after Ava tells Hayden that Elizabeth has the diamonds, Hayden goes on a rampage and confronts Liz, telling her to give them back to her. Liz lets Hayden know that she is going straight to Port Charles police. This statement causes Hayden to lose her mind and she slaps Elizabeth. Thankfully Hamilton Finn is there and able to break up the two. Liz continues to play phone tag with Jordan, trying to hand over the diamonds, and then is later thrown down a flight of stairs. Franco steps up about who did it and Finn also steps up to defend Hayden. Interestingly enough Jordan hears the Hayden accusation and spoilers indicate that an arrest will be made this week and it is probably Hayden.

There is going to be a blackout this week and during said blackout the serial killer will claim another victim. It seems that (surprise, surprise) Andre Maddox will find the victim and try to revive them while Finn is standing there. During the blackout, Monica and Finn work hard to keep things going amidst the chaos. Sabrina helps things along and impresses Monica. Griffin will discover a piece of evidence regarding the serial killer and it seems that Monica is the next on the killer’s list. The good news is that GH fans will find out who the serial killer is. The bad news? It will take the Port Charles police department a little longer to come up to speed on things.

Spoilers indicate that super sweet (and smart) Spencer is headed to boarding school for now. Will the cute little Cassadine become the next victim of SORAS, only to return as an older version of his former self? Hard to tell. Nicolas Bechtel has done an excellent job with the role, but has also moved onto other projects (Disney Channel’s Stuck in the Middle). Grandma Laura will be off air for a bit helping Spencer get settled. Good news is, she’ll only be gone for a couple of weeks and returning in September.

As GH fans bid farewell to one favorite, they also get to say hello to another this week. Damien Spinelli returns to Port Charles and he is here to celebrate the pending nuptials of his two friends Sam and Jason. The JaSam wedding is taking place at Sonny’s and all the festivities start near the end of the week. Speaking of Corinthos, while grandma Bobbie offers to help Carly with baby Avery, her daughter declines and decides to stay with Nelle.

Nina and Curtis meet this week so that Curtis can help Nina get a baby. Sadly, Ava overhears this idea and is immediately up to no good. Turns out, Ava has not forgiven Nina for stealing her little one. As the week progresses, Nina will become more frustrated about her baby situation (or lack thereof). In other Nina news, she has some pretty shocking information for Claudette as it relates to Nathan.

Alexis does not seem to be doing good this week and BFF Diane is there to help and offer advice. Still, Alexis is dealing with a fair amount of hurt and the entire scenario seems is spinning her out of control. While Alexis’ behavior is worrisome, Ava is fretting over the fact that her brother is facing hard jail time. She turns to Paul this week, but will he (or can he) help her out?

Dr. Rivera requests more time with Teddy this week, but Michael is not too pleased about him spending so much time with Sabrina. While Michael and Sabrina have a heart-to-heart, Sonny exchanges some words with Rivera. Meanwhile Maxie and Nathan are still dealing with the entire ‘shooting Griffin’ secret being exposed. Momma Felicia chimes in with some advice this week to the not-so-happy couple. Can she save their wedding plans?