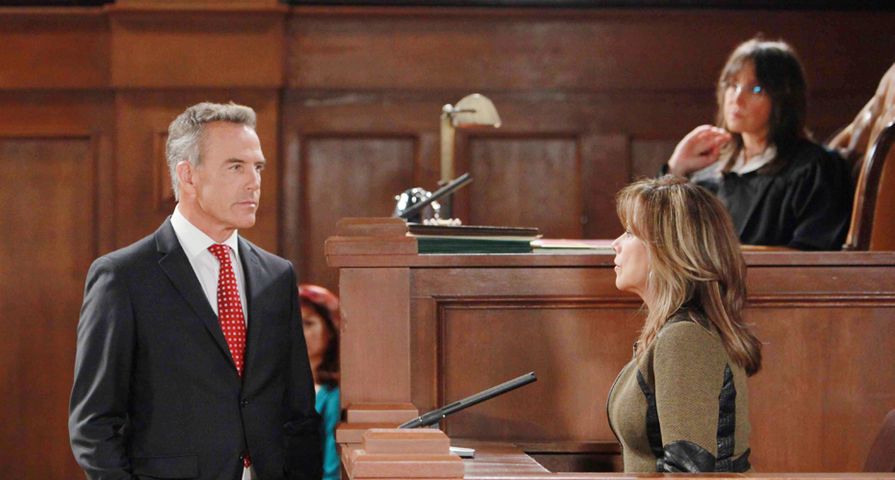 Summer might be unofficially over, but the land of Port Charles continues to heat up. Learn more about (secret) sisters Hayden and Liz, Julian’s Trial, just how much Paul scrambles this week and the plight of the Corinthos clan in the General Hospital (GH) spoilers for the week of September 12th.

5. Hayden Donates Blood … At A Price

Hayden agrees to donate blood to Elizabeth, but it comes at a cost: she wants those diamonds back. Liz still believes that Hayden pushed her down the stairs which landed her in the hospital in the first place, so this donation of blood confuses her. Meanwhile Hamilton Finn vows to help Hayden and, as the week progresses Hayden’s charges are dropped, thanks to him and Curtis. In other related spoiler news, Liz asks something of Sabrina that might put her at risk. On a Franco note, he struggles with the ‘sister’ secret, but he doesn’t need to for long as it comes out later in the week. Hayden’s world is turned upside down with the news and she has a long talk with her mom, Naomi.

Julian’s trial begins this week and, thanks to Ava’s blackmailing, Paul is working hard at throwing the case off track without looking like he’s doing it on purpose. Paul has something up his sleeve and it seems Alexis holds the key. She’s a mess and with a small bit of prodding, Paul figures she may just lose it on the stand. This provides Julian with a glimmer of hope and he lightens up this week realizing that prison life may not become a reality after all.

By now GH fans know that the serial killer is Paul Hornsby. Despite the fact that we know that, the PCPD don’t! Port Charles police solicit the aid of Andre Maddox this week when it comes to the GH killer and as the week ends, Dante finds another clue in this case. As the DA, Paul is keeping a watchful eye over everything, but we all know the bigger reason for this is so that no one clues in that he is the actual killer. It turns out that Monica was seemingly his next victim, but someone else gets the ax instead simply because they get in his way. Spoilers indicate that Paul’s victims will now pick up in pace. Actually, it seems that GH could be closing down due to these killings and Tracy is quite upset over the news of this week. If the police can’t figure out the killer soon, the hospital will close as they cannot continue to put people’s lives at risk.

Carly and Michael get into a heated argument over Sabrina. Michael gets offended when Carly tells him that he is moving too fast with her. Nelle offers support to Carly after the confrontation and the two ladies continue to bond. When it comes to Carly’s other son Morgan, it appears as if his relationship isn’t doing so hot and Kiki wonders this week if she should cool down with him. Darby also storms back into Port Charles which could add fuel to the fire when it comes to Morgan and Kiki.

Claudette drops a shocker this week, revealing the truth about something and spoilers tease that it may be about a kid we all don’t know about. Lulu turns to Kevin for advice and support around her embryo investigation. She wonders whether or not she should pursue this as Dante doesn’t seem like he wants to.