16 Stars Who Officiated Other Celebrities’ Weddings 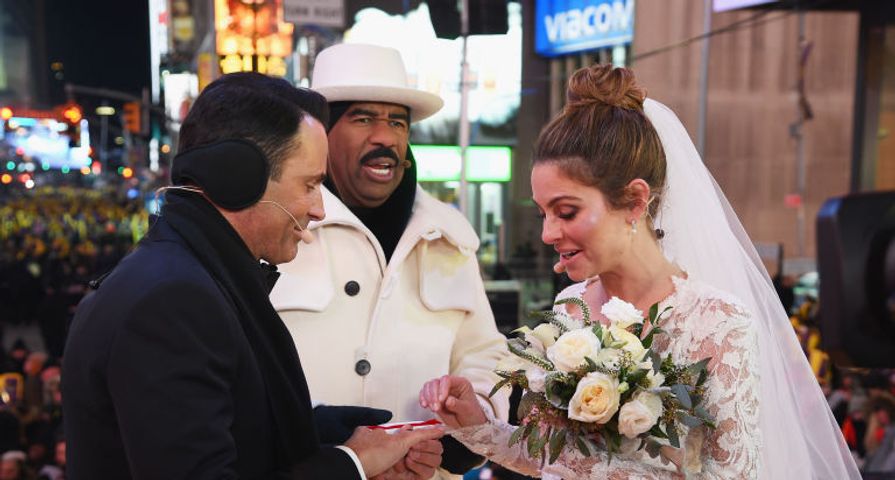 Celebrities can wear many hats and with such confidence and presence, they are natural choices to officiate the weddings of their friends. Some stars have actually been ordained for years and have officiated many weddings while others did it as a special favor for a famous friend. With a star-studded guest list and extravagant weddings, it isn’t surprising some stars upped the ante by having someone famous perform the nuptials. Here are 16 stars who officiated other celebrities’ weddings:

Victor Garber and Jennifer Garner became like family when they starred on Alias together as father and daughter, and their bond was so strong Garner asked him to officiate her wedding to Ben Affleck. Garner and Affleck tied the knot in June 2005 with Garber leading the ceremony and, after the birth of their eldest daughter, Violet, Garber was named the godfather.

For most Jeff Probst is known as the host of Survivor, but when he isn’t busy hosting he has also been an ordained minister in the Universal Life Church since the 1990s and has no problem playing the part of officiant when needed. On July 3, 2010, The Office star Jenna Fischer wed Lee Kirk and her longtime friend Probst was on hand to marry the pair as the two go way back before fame found them both.

When NSYNC’s Lance Bass married his longtime love Michael Turchin in December 2014 it was an extravagant and star-studded affair. Along with the several celebrities in attendance, the whole thing was presided over by co-officiants Jamie-Lynn Sigler and JoAnna Garcia Swisher. The big day was also filmed and televised on E!, and as a result, Bass and Turchin became the first same-sex couple to exchange vows on cable television.

When Girls actress Allison Williams married CollegeHumor CEO Ricky Van Veen in a private ceremony on September 19, 2015, she called upon beloved actor Tom Hanks to be the one to marry the two! Williams met Hanks after starring with his wife Rita Wilson on Girls, and knew the actor would be perfect to officiate. After the wedding, Hanks opened up about his special role in the big day and joked about continuing his Reverend duties. “Here’s what I did, I studied the ministry for over $35. And if you want to call me the Right Reverend Tom Hanks, I think you should. I’m for rent. If you can afford the honorarium, I’ll be there for ya,” Hanks told Extra.

Mark Consuelos has a lot of talents up his sleeve and that includes being ordained to perform weddings. In 2008, famed radio host Howard Stern married Beth Ostrosky in front of a star-studded crowd and Mark Consuelos officiated the ceremony. As well as many stars in attendance and the handsome actor officiating, Billy Joel gave a performance and Chevy Chase delivered a roast.

When songstress Vanessa Carlton married Deer Tick lead singer John McCauley in 2013, she kept it all in the musical family by having none other than musical legend Stevie Nicks officiate the wedding. The outdoor ceremony was held with a Bohemian theme and afterward, Carlton tweeted a photo of the moment with the caption, “Thanks Stevie for marrying us!” which showed Nicks wearing a floral crown similar to Carlton’s.

Kris Jenner already has a lot on her plate as a reality star and momager to one of Hollywood’s most famous siblings, but that hasn’t stopped her from taking on officiating duties. In 2015, Jenner officiated the wedding of her good friend and Real Housewives of Beverly Hills star Faye Resnick who married Everett Jack Jr. Most recently the Kardashian-Jenner matriarch married Teen Wolf, Arrow and American Horror Story actor Colton Haynes and Four Seasons artistic director Jeff Leatham on October 27, 2017.

Run DMC founding member Joseph Simmons is also known as Run and Reverend Run because early in his career he became an ordained minister. Over the years he has officiated many weddings including that of Nicole Richie and Good Charlotte member Joel Madden on December 11, 2010, which was held at Lionel Richie’s luxurious estate.

Actress America Ferrera decided to make her June 2011 nuptials to Ryan Piers Williams an Ugly Betty reunion! Judith Light who played Claire Meade on the popular series was called upon to officiate the wedding while Vanessa Williams, who played Wilhelmina Slater, was the master of ceremonies for the big day which was held at William’s home in Chappaqua, New York.

Longtime Bachelor and Bachelorette host has officiated a couple of Bachelor nation weddings. In 2012, Harrison married producers Cassie Lambert and Pete Scalettar who met while working on the hit dating series, and a few years later he put his skills to use again when he married Evan Bass and Carly Waddell, one of the few couples to actually make it out of Bachelor in Paradise. ” I think if you really know Carly and Evan it’s pretty easy to see that they were meant for each other. The goofiness, the silliness, and the overall undying love of life that they both have is hard to match. But thankfully, they found each other,” Harrison said and added it was an “honor” to marry the pair.

Jennifer Aniston and Justin Theroux tried to keep their big day a secret when they wed on August 5, 2015, but one famous friend was in the know — Jimmy Kimmel. The late-night TV host officiated their ceremony and Theroux couldn’t have been more thrilled. “It was the biggest blessing in the world. It was exactly what you would want him to do. He was extremely funny, kept things extremely light, was extremely touching,” Theroux revealed of their famous officiant during an interview on Good Morning America.

Jonah Hill and Maroon 5 frontman Adam Levine have some surprising connections in the industry, but many were still shocked when the actor led the wedding ceremony between Levine and Behati Prinsloo. As it turns out, the pair have been friends since junior high school and Jonah Hill’s late brother was the manager for both of them. “Adam knew that he was putting himself [in] good hands by having Jonah officiate,” a source close to Hill and Levine said of the big day. “He and Behati set out to make this the most fun wedding that anybody had ever experienced and they truly did just that.”

Blake Shelton is one of the funniest guys in country music and his charming and easy-going personality has made him not only a great performer but a great coach on The Voice and an officiant! Shelton became ordained so that he could perform the wedding between fellow country singer Ashley Monroe and baseball player John Danks back in 2013. Shelton’s then-wife Miranda Lambert was Monroe’s maid of honor, and she wanted both to have big roles in her wedding day. “They’re my dearest friends, and we wanted someone with personality to marry us!”

Sir Ian McKellen is one of the most respected men in Hollywood and is highly sought after for many roles, but his best friend Patrick Stewart needed him for a different type of role. Stewart asked his longtime friend to preside over his 2013 wedding to Sunny Ozell. “His remarks were not only full of wisdom and humor and poetry but knowledge of the two of us. There wasn’t a person there who didn’t get choked up. I certainly did,” Stewart said of having McKellen officiate the nuptials.

Anna Faris truly is one of Hollywood’s sweethearts so it isn’t surprising she was more than willing to take on the big task of officiating a wedding for her friend. In late 2017, Faris helped in the marriage of her Anna Faris is Unqualified podcast co-host Sim Sarna to his wife Amy. Faris shared a video of her officiating the ceremony and pictures from the wedding had Faris in front of the couple making their union official all while wearing Ugg boots.

New Year’s Eve is a big night for engagements but star Maria Menounos topped everyone when she got married on live TV and had the whole thing officiated by none other than Steve Harvey. Harvey was the co-host for Fox’s 2017 New Year’s Eve special from New York City’s Times Square and admitted early in the broadcast he had recently became ordained, but no one knew it was to perform a wedding right there and then! Menounos exchanged “I Do’s” with Keven Undergaro in the frigid temperatures and planned the whole thing in only two weeks.