15 Things You Didn’t Know About Dazed and Confused 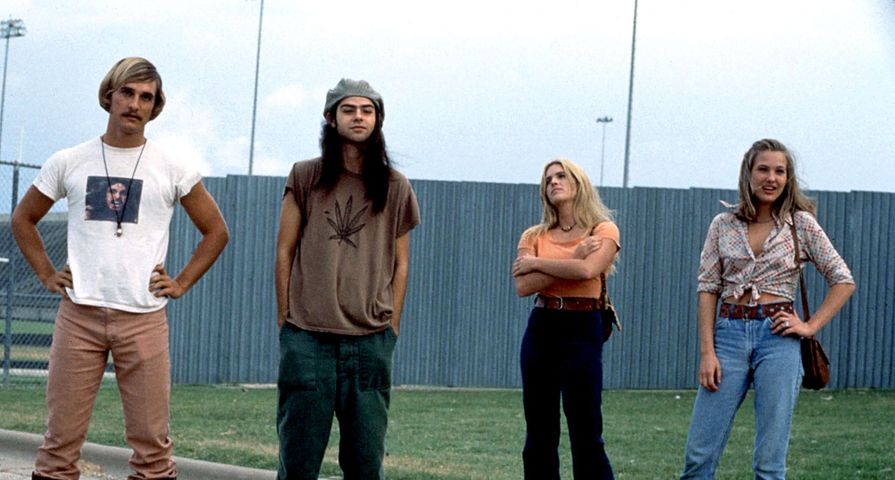 It doesn’t matter that 22 years have passed. Dazed and Confused is still the film to watch when you’re aching for school to get out, or you’re celebrating the “last day” of anything. There is a wealth of “Did You Know…” that spilled forth from the making of this film, including on-set rivalries, romances and how 15 percent of the film’s entire budget was spent securing rights for the soundtrack. For fans who’ve loved the film since 1993, or for newbies who have recently enjoyed their first viewing, here are 15 fun facts about Richard Linklater’s Dazed and Confused.

There was a quiet industry buzz about Dazed and Confused. The word was out about a talented young director in Texas,who was making a film — a love letter to the high school experience in the mid-1970s — and agents sent out some of their best young talent in the early 1990s. Ashley Judd, Vince Vaughn, Renee Zellweger and Claire Danes all auditioned for roles that eventually went to others. Vince Vaughn read for a couple of roles, and might have been cast as Benny if he didn’t closely resemble Ben Affleck, who had booked the role of O’Banion. Claire Danes was deemed “too classy” to portray Sabrina (then she went on to book My So-Called Life), and Renee Zellweger was eventually cast in a non-speaking role. She is most easily seen as a senior, hazing the incoming freshman class.

Top Notch Burger is a genuine, Austin, Texas, hamburger drive-in that has been a local staple since 1971. The owner, who took over the restaurant from his father decades ago, passed away in 2008, leaving the business without marketable leadership. Top Notch closed for a short while, but re-opened in 2009, and has become a beloved, local hangout and growing tourist trap. This drive-in style burger joint is famous for cooking their burgers over charcoal, and serving up fries and shakes delivered by carhops. In addition to serving as a setting in 1993’s Dazed and Confused, it was also seen in the 1999 high school football flick, Varsity Blues.

How did Richard Linklater get his hands on such hot, American muscle for Dazed and Confused? Nah, that’s not a reference to a young Matt McConaughey or Ben Affleck, it means American automotive machinery. Shawn Andrews (Pickford) rolled in a classic, 1970 Pontiac GTO “Judge;” Ben Affleck (O’Banion) thrashed in a 1972 Plymouth Duster 340 (in primer grey — perfect for his character); and Matthew McConaughey (Wooderson) sported the black beauty, 1970 Chevrolet Chevelle SS. Nicky Katt, the ass-kickin’, beer-drinkin’ pot head (Clint) boasted a late model — relative to 1976 — Pontiac Firebird he refers to as White Lightning. A 1974 or 1975, judging by the short glimpses of the car throughout. There were other great cars from the era — Ford Bronco, VW Beetle, several Texas trucks — all lending to nostalgia.

Shawn Andrews and Milla Jovovich enjoyed an on-screen romance which spilled into real life. It spilled so heavily into real life, the two actors hopped to Vegas during filming (presumably on a day off), and got married… or so goes the legend. In truth, they really did elope to Las Vegas, regardless of Milla only being 16 years old at the time, and Shawn being 20 or 21. They were married for a short time before Milla’s mother intervened, and had the marriage annulled. Who’s to say if the couple did it because they thought their characters, Pickford and Michelle, would do that in the world of Dazed and Confused, or if they really were a couple of smitten kittens. Brass tacks, for a short time in 1992, Shawn and Milla were legally married.

11. Milla Jovovich and Her Original Song

Has there ever been a better high school party than the Dazed and Confused “Party at The Moon Tower?” During the party, Milla Jovovich (Michelle) is heard singing and playing a song on guitar. Yes, it is actually Milla Jovovich playing and singing, and the song is entitled “The Alien Song.” This was released a year after Dazed and Confused, on her solo album, The Divine Comedy. The young Milla was a mystery at the time. She had done a few acting roles, and enjoyed several modeling gigs, but there was no Internet… no way to learn more about this gal. There were debates related to the pronunciation of her name — that’s how fascinated people were. Rick Linklater could not have better cast the role of the wallflower/social butterfly/arm candy Michelle, who is really only heard during the film when she sings.

Have you ever noticed the name of Matthew McConaughey’s charitable foundation? JKL. Any guess as to what those letters represent? Gotta keep on livin’, man. L-I-V-I-N. JKL stands for “Just Keep Livin.'” According to the JKL mission statement: “The just keep livin Foundation was started by Matthew and Camila McConaughey and is dedicated to empowering high school students by providing them with the tools to lead active lives and make healthy choices for a better future.” Matthew McConaughey has nothing but fond memories of his first cinematic experience, and has continued to pay tribute as the years have passed.

The Dazed and Confused soundtrack was a multi-volume album, and included some of the best American pop and rock songs from the 1970s. One group that is referred to within the script is that of legendary rockers, Led Zeppelin. The title of the film being taken from their song of the same name. Richard Linklater attempted to score the rights to the song “Rock and Roll,” to use within the film, but he could never get the nod of approval from Robert Plant. Jimmy Page said yes, but Plant… no go. Ten years later, when Linklater was directing School of Rock, he offered a Jack Black-led chorus of Led Zeppelin’s “Immigrant Song,” and finally received permission from Robert Plant and Jimmy Page to use their music in one of his films. There were several songs in D&C that Linklater couldn’t score for the soundtrack, notably, Bob Dylan’s “Hurricane.”

In the original Dazed and Confused script, there is an entire subplot involving the bicentennial soldier statue stolen and painted in the likeness of Gene Simmons. Cut scenes featured the statue being stolen; Michelle painting the faces; the statue on display at several locations; and it being apprehended by police as the night of nights came to a close. It didn’t work for pacing, and most of the scenes were cut; however, the statue went on to enjoy another life, and was — according to lore — acquired by Gene Simmons for a short while, before he auctioned it at a KISS memorabilia sale. It was allegedly purchased for $6,000 by a fan, and surely undervalued at six grand.

Adam Goldberg had worked in a couple feature films before auditioning for Dazed and Confused, but D&C offered a role that he wanted desperately. He was so intrigued at the thought of getting to mix it up with Nicky Katt’s character that his audition preparation was comparable to his filmed performance. The footage is available on YouTube, complete with the reactions of the crew: it was obvious that he was beloved by producers and director Richard Linklater from the get-go. Goldberg’s portrayal of the character, Mike Newhouse, is iconic, and the fight between he and Nicky Katt during the Party at The Moon Tower serves as one of the most authentic moments in the entire film. It is hilarious, and gut wrenching.

Wiley Wiggins was another cinematic rookie in Dazed and Confused, and the young actor didn’t think he could score the role of Mitch Kramer, because Mitch played baseball. Wiley had never thrown a baseball in his life. How that’s possible, one can only speculate, but it was true. Richard Linklater encouraged him to stay in the mix, explaining that they could “fake” the baseball sequences with a stunt thrower. When it came to the baseball scenes, they filmed in a way it looked like Wiley was pitching great pitches. In reality, they filmed Wiley’s wind-up and delivery, then cut to the toss of an actual pitch that hits close to the strike zone. Ultimately, it fooled all of us, but now, if you look closely…

5. When All Else Fails… Go To The Nose

Wiley Wiggins may have unintentionally started a trend with his performance in Dazed and Confused. Everyone has nervous ticks, and idiosyncratic tendencies. In the world of acting, they’ll call them “actor habits.” For Kristen Stewart, it’s the lip bite. For Wiley Wiggins, it was all about the nose. Every time Wiley’s character, Mitch Kramer, experienced some nerves, or some embarrassment, or some confusion or flattery… he grabbed the bridge of his nose. He does this 40-plus times throughout the film, and seven times in the scene when he’s talking to his classmate Sabrina at The Emporium. Here’s the thing: people started to doing this. Partly as a joke, then allowed it to become habit… this all happened in the mid-1990s. No joke.

Throughout the film, the soon-to-be senior boys drive around town, looking for incoming freshman in order to give them their licks. Licks, if you weren’t raised in the South, or in the age of corporal punishment, was a sweeter way of saying “spanking.” All of the paddles used in Dazed and Confused were customized by the actors, as they would see fit for their characters. This was a stroke of genius for Richard Linklater, making the process a true artistic collaboration between the writer-director and actors. The paddles are on display more than once in the film, and can be seen with various phrases, words, pictures, signatures and the like. Perhaps the best, and most comedic is that of Ben Affleck’s character, O’Banion, reading “FAH-Q.” Classic.

How many times was the word “man” used in this 1970s comedy? A whopping 203. It was preferred to “dude” in the world of Dazed and Confused, and that makes sense, considering it’s Texas in 1976. Rory Cochrane’s character, Slater, used it more than any other, and there were some sentences where it seemed as if he was trying to only use the word “man.” Matthew McConaughey did his duty in getting his fair into the mix as well. The second most repeated word in the film? The F-bomb. A film set in high school with such language? Go f**kin’ figure, man.

When it comes to quality liquor sales in a cinematic setting, there’s only one actor Richard Linklater will apparently trust: David Blackwell. David has worked with Rick Linklater three times, and twice, he has played a very enjoyable liquor store clerk. In Dazed and Confused, he sells a six pack of beer to an underage Mitch Kramer (Wiley Wiggins), and offers some gifted, clerkly conversation. Similarly, David serves as the liquor store clerk in 2014’s Boyhood, and offers to cash a check for two underage kids. If there’s a lesson to be learned in all of this: cast David Blackwell as a liquor store clerk in your movie, and it’s destined for wild success.

According to the Oscar winner, the scene including the iconic, “Alright, alright, alright…” was improvised. The character of Wooderson wasn’t even supposed to be in the scene, but Richard Linklater felt he would be at Top Notch on a Friday night. The two talked, Matt hopped into the sweet Chevy Chevelle Super Sport, wallowed in the world of Wooderson, then cruised the Top Notch drive-thru, and channeled what he says was the inspiration of Jim Morrison from a live recording of The Doors. As he was trollin’ for chicks, he came to the conclusion that he had three of the four things he was interested in: his car, his weed and rock’n tunes. He offered a quality alright for each of the three he had, while looking for the fourth… a hot chick.