10 Things You Didn’t Know About ‘Bridesmaids’ 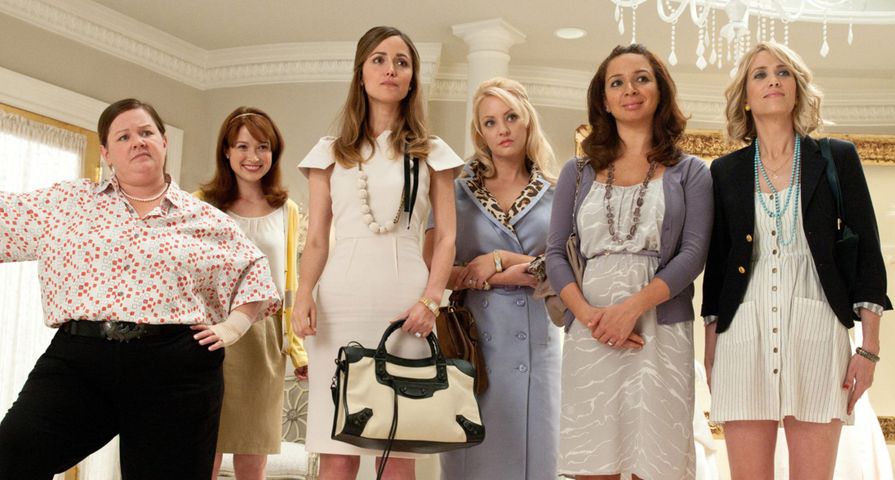 Ever since Bridesmaids was released in 2011 it has reigned as one of the best comedies with an all female cast. Starring hilarious actresses like Kristen Wiig, Melissa McCarthy, Ellie Kemper, and Rebel Wilson, the movie was both commercially and critically successful. Wiig co-wrote the script and it was produced by Judd Apatow, the filmmaker behind Knocked Up and The 40-Year-Old Virgin — so it’s no wonder it was such a huge box office success. It’s been several years since the film was released, so here’s a look back at 10 things you didn’t know about Bridesmaids!

10. The Film Wasn’t Supposed to be about a Wedding

The entire movie revolves around Annie’s best friend, Lillian’s wedding, but according to lead actress, Kristen Wiig, the movie wasn’t supposed to be about a wedding at all! “I feel like when we started writing it, we never saw it as a wedding movie. In the earlier drafts for the first three years, there wasn’t even a wedding in it at the end. We didn’t really set out to make it different from other movies or make any statement about those movies. It’s kind of like you were saying, the wedding is just a backdrop in the way. We just wanted to write a fun script where our friends could come in and play and write something that had a lot of women in it,” said Wiig.

Kristen Wiig’s co-writer, Annie Mumolo, said the script took years to finish. The two women started writing the film in 2006, but it wasn’t released until 2011. A lot of the time writing was spent “getting into the heads” of each character and the two of them drew on experiences from their own lives to shape them. “We had both been in both positions, so we would sit in the heads of those people, and come from the heart,” she said.

All of the scenes in Bridesmaids are scripted, but Wendi McLendon-Covey said some of the more comedic ladies were allowed to go off script and do some improv. “We filmed all of the scenes as scripted, but then there were some scenes that lent themselves to more improv; so we made sure we got the coverage of the scripted version and then they would just let us go. Definitely at the opening engagement party scene where you see all of us for the first time, there was lots of improv for that,” said McLendon-Covey.

Rebel Wilson and Matt Lucas played Kristen Wiig’s hilarious sibling roommates Brynn and Gil in the film Bridesmaids. What’s pretty interesting about these two is that in 2012 they told Us Weekly their role as roommates inspired them to actually move in together! After filming wrapped up, the two got a place in West Hollywood. “We played roommates so well in Bridesmaids we thought we’d do it for real. Except instead of annoying Kristen Wiig, we’re now annoying all the neighbors nearby,” said Wilson. While living together the two received complaints from their neighbors for making too much noise and singing Annie showtunes too loud.

Melissa McCarthy has said that she based her character off Guy Fieri, who’s best known for his series on the Food Network! According to McCarthy, he was the first person she thought of when she read the script. “Really, when I first read it, the first person I thought of was Guy Fieri from the Food Network. I wanted to do the shirt, the Kangol. Every scene I would have my glasses on the back of my head,” she said. “I tried for a long time to convince them to let me wear short, white, spiky hair, and they were like, ‘You can’t actually be Guy Fieri.’ Cut it off at some point!”

5. Rose Bryne Had to Learn Thai

As we’ve now learned, there was a lot of improv in the filming of Bridesmaids which is one of the reasons the film was so great. During one of their improv sessions, Rose Byrne, who played the character of Lillian’s wealthy friend, Helen, pretended to speak Thai, but really she was just making up words. The producers loved it, so they made her learn the actual phonetics of some Thai words so it could be included in the film.

A lot of the film was developed from real life stories from Wiig and Mumolo’s lives and the engagement party scene was one of them. “My friend’s engagement party was at this beautiful country club. My car had both rear view mirrors duct-taped on. I came home with this crazy party favor and the door to my apartment was swollen shut, so I had to crawl through the space between my window frame and air conditioner. I just remember sitting there thinking that this was the great divide between where I was headed and where my friend was headed. Our lives suddenly became very different,” said Mumolo.

When Bridesmaids first came out many people were curious about leading man, Chris O’Dowd, and audiences fell in love with his character, Officer Nathan Rhodes! According to O’Dowd, he initially auditioned for the character with an American accent, but the director decided to go with something a little more original which meant keeping the cute Irish accent! In order to land the role, O’Dowd did a long improv session with Kristen Wiig. “Kristen was there with Judd [Apatow] and [director] Paul [Feig]. We sat down and read this script, then we did half an hour of improv…it went really well. Kristen is so easy to work with and she’s just an amazing improviser,” he said.

All throughout filming and pre-production, the script was constantly being changed and reworked. “We basically did four and a half years of rewrites,” said Wiig in an interview with the New York Times. A major rewrite happened just a few weeks before filming when a huge chunk of the movie was taken out. According to Mumolo, there was supposed to be a bachelorette party sequence in Vegas, but The Hangover had just come out and they were afraid of it being too similar. “Judd just said, ‘Vegas has been done, ‘Hangover’ did it, we don’t want to be the dead horse,'” said Mumolo.

Jill Clayburgh played Annie’s mom in the film Bridesmaids, and sadly this was the last role she had before her untimely death. She passed away the year before the movie was released, so producer Judd Apatow cut several of her “dirty jokes” to preserve her memory. In an interview with Collider.com, Apatow said: “We took some dirty Jill Clayburgh jokes out because I just thought, ‘That can’t be the last thing she ever says in a film.’ We did debate it. We were like, ‘That’s funny, but that would be questionable.’ She was the nicest woman.”