11 Things You Didn’t Know About The Mission: Impossible Movies 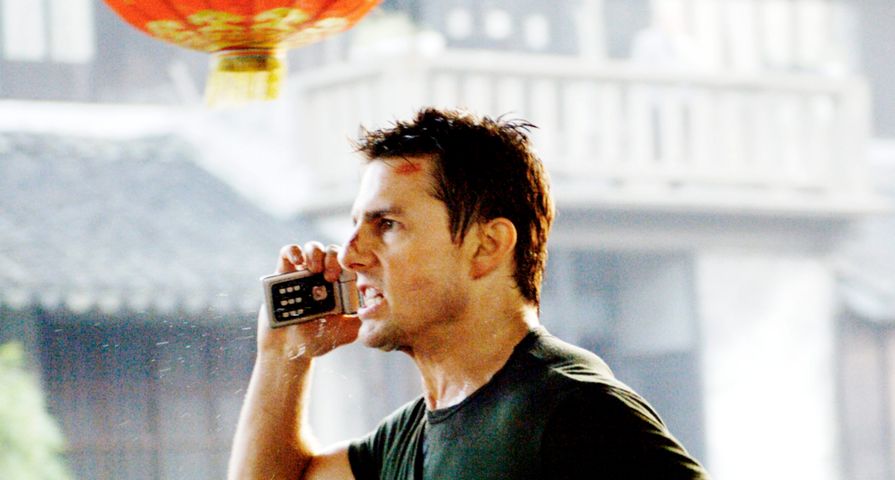 Nearly 20 years and five films into the Paramount franchise, the Mission: Impossible movies have enjoyed incredible box office success, and quality plot action throughout their relatively short history. The fact that Tom Cruise still stars as Ethan Hunt after nearly 20 years of production is saying something about the franchise, and its star. Within all five of the films, there are several “Did You Know” pieces of trivia that movie lovers should know. Here are 11 of them, moving in chronological order. ***Spoilers Ahead***

There’s that scene. That scene that serves as definitive for all Mission: Impossible movies starring Tom Cruise. The very same scene used as satire and mimicked in animation and other films: Tom Cruise, suspended from the ceiling, perfectly balanced, parallel to the floor. Except that he wasn’t fully balanced, and his head and torso kept hitting the floor while performing the stunt. In order to counterbalance his body, Tom had the idea to put several coins in his shoes, and voila: balance. And that’s why people should always keep a little change in their pockets. One never knows when they might be called into the world of super spying.

10. A Most Massive Release – Mission: Impossible

Summer blockbusters had become huge business by the time Mission: Impossible rolled around, but none had been rolled out to a bigger scale. This was during the supreme height of Tom Cruise’s popularity, before the crazy, chair jumping with Oprah, and before people flippantly dismissed Tom the actor, because Tom the person was a Scientologist. The first of the film franchise served as the first motion picture to be shipped to over 3,000 theaters for opening on the scheduled release date. And the numbers came back as expected. Still, Ghost Protocol remains the most profitable box office hit for the series, even considering adjusted gross receipts.

9. Where Are The Guns – Mission: Impossible

This was truly an action movie for the 21st century anti-gun activist. While there are guns in the mix, Ethan Hunt never uses a gun to vanquish a foe, and there are no shootouts in the first Mission: Impossible film. In fact, the body count is relatively low, at a measly seven. The script focused more on the elusive nature of spies than it did the necessity of a spy sometimes shooting their way out of trouble. This trend changed rather quickly in the second film, which was directed by John Woo. Combining the names John and Woo suggests a few things. Lots of guns. Lots of explosions. Lots of violence. But for old school fans of the original Mission: Impossible series, the first film is a revamp with a somewhat similar tonality.

When John Woo presented his initial cut of the film to Paramount brass, they thought he was insane. It was a well-crafted, three-and-a-half hour monster that was sure to garner an MPAA rating of “R.” Paramount told John that he had to chop the thing up, lose some violence and deliver a finished film that ran at 120 minutes or less. Ultimately, the theatrical cut hurt the film. It was disjointed, failed in the realm of continuity and possessed some obvious plot holes. Now, everyone knows why. It’s amazing that studios won’t release longer films. Sure, it’s a big ask of the audience to hang in there, but in an age where people are paying between 10-20 bucks for a movie ticket, they love the most bang for the buck. That said, Woo brought the final cut in at 123 minutes.

Uncredited as Mission Commander Swanbeck, Anthony Hopkins utters the words for the first and only time in the Mission: Impossible franchise. He actually refers to something as “Mission: Impossible.” These are the things John Woo loves to do. There was even a spoof that aired at the MTV Movie Awards starring Ben Still as Tom Crooze, Tom Cruise’s stunt double, and he jokes about it while suggesting a few ad-lib lines to Tom Cruise and John Woo during a “stunt meeting.” If done well — Hopkins — it can be quite effective. If done poorly — Stiller — it is basically a hot mess of melted Velveeta cheese product over stunts and explosions.

Metallica had been approached many times to offer an original, metal jam for a film’s soundtrack, but it was never something they were interested in… not until they got the offer from the Tom Cruise/Paula Wagner production team to offer an adrenaline fueled song to the mix, which would also include a sweet, action-packed music video for the band. The song, “I Disappear,” went on to be a huge hit in the summer of 200o, sitting at the top of the rock charts for seven consecutive weeks. It also garnered several MTV VMA nominations, including Best Rock Video. A little trivia about this trivia: an unfinished version was discovered, and shared on Napster, which served as catalyst for Metallica leading the charge to take down the original, illegal file sharing network.

You know that guy who is presently directing, and working post-production on Star Wars Ep. VII? Yeah. J.J. Abrams. Mission: Impossible III was his first feature film as a director. He came onto the project after Joe Carnahan bailed. J.J. Abrams was already an “it” guy in Hollywood as a producer, and director of television that was good enough to compete with feature films, so the move made sense for Paramount/Cruise-Wagner productions. Ultimately, there were two Mission: Impossible IIIs out there, because Carnahan put the wheels in motion to do the “punk rock version” of Mission: Impossible. Ultimately — as Carnahan described it — he was rolled by the machine known as Hollywood. J.J. was well versed in the game, so he took the script, changed it to his liking and delivered a solid rookie effort.

For those who have seen it, scene work in Rome, Italy, can be recalled as part of the Mission: Impossible III mix. If there is one thing about the Roman citizens, they’re curious when Hollywood comes to town. More than the citizens, the millions of tourists who flock to Rome annually want to see anything that looks interesting, especially a Hollywood movie shoot starring Tom Cruise. When the crew began prepping for the scenes in Rome, they ran into the problem of looky-loos and rubberneckers to such an extreme. They decided to hire a bunch of girls in bikinis, as well as actresses dressed as nuns, then play mock scenes with a small, second unit set up around them. They did this to such perfection the principal unit was able to shoot in Rome uninterrupted with relatively no issues.

The fourth installment of the Mission: Impossible franchise brought on its fourth director, Brad Bird, famed animator and screenwriter of the Pixar crew. As is consistent in everything Brad Bird has a hand in, you can find his A113 Easter Egg in Ghost Protocol. Yes, this is the same A113 that is the alleged homage to the animation classroom at California Institute of The Arts, and the letter/number combination that drives conspiracy theorists nuts. Within this particular film, the number can be seen on the class ring of the character Hanaway, played by Josh Holloway. The only thing that stunk about Holloway’s involvement in the film is that he didn’t last very long.

When it came to building out the team for Tom Cruise to work with in Mission: Impossible – Ghost Protocol, Tom suggested Jeremy Renner as part of the mix. When word got to Jeremy that there was top level interest in him being a part of the next M:I installment, he jumped on board without seeing a script, and instead settled on hearing a rough, story outline. Jeremy Renner was — and is — a huge fan of Tom Cruise, and remarked that working with Tom was a dream come true. He complimented Tom as an actor, but suggested he’s an even better guy. Jeremy returns to the screen with Cruise in Mission: Impossible – Rogue Nation.

It has been well publicized. Tom Cruise was attached to an Airbus A400M cargo plane, and rode the outside of this plane for several camera passes, up to 5,000 feet in elevation. What many people don’t realize: Tom had special contact lenses developed for the stunt in order to keep his eyes open; a special camera was developed to mount to the plane to capture the footage; director Christopher McQuarrie was so terrified that Tom could be in danger he reluctantly agreed to the stunt taking place only after Tom insisted. Once everything was set, Tom made Chris McQuarrie agree to keep rolling no matter what happened, until they capture the elements of the stunt. Tom Cruise is 53, people. Fifty. Three.