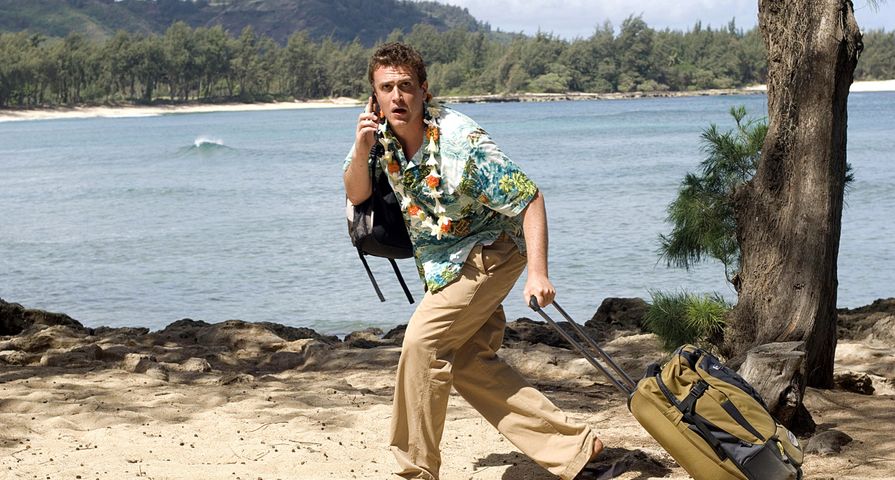 Even though Forgetting Sarah Marshall was released just over nine years ago, it still stands as one of the funniest and most original romantic comedy-dramas of all time. Starring hilarious actors like Kristen Bell, Russell Brand, Mila Kunis and Jason Segel, the film was written by Segel and produced by Judd Apatow, the man responsible for similar hits like Knocked Up and The 40-Year-Old Virgin. In honor of its success, here’s a look back at 9 things you probably didn’t know about Forgetting Sarah Marshall!

9. Mila Kunis Got Into a Jet Skiing Accident

In an interview with ThoughtCo. she recounted the story of how she got into a jet skiing accident on her way to shoot a scene in the water. “I don’t technically have to do anything physical in this movie, other than tread water. And we’re in this ocean and to get to this water I had to take a jet ski. When I got off the jet ski, the jet ski and I collided and I ripped my neck off…I didn’t know I did anything. I got out of the water and they were like, ‘What is on your neck?’ It’s like blood, but it healed really well,” she said.

The movie starts out with Jason Segel’s character, Peter Bretter, getting dumped by his girlfriend while he’s naked. According to Segel, there was some real life inspiration behind this scene! “That was taken from the pages of real life. I once got dumped while I was naked, but she asked me to put clothes on during this real breakup, my real-life breakup, and as opposed to in the movie when I say no, I did go to put clothes on. So she waited for me while I went back into my room to get dressed…the whole time I’m thinking this is really, really funny. I’m going to use this in a movie someday,” he joked.

Another part of the movie that was taken from Segel’s real life is the Dracula musical! He wrote it as a way to kick start his acting career and they incorporated it into the film to create an original ending. “We were sitting around brainstorming, like, what could be an original ending for a romantic comedy? And I looked at him half-joking, and I said, well, we could use my Dracula musical. And he looked at me…You saw this look in his eyes like, oh my God, that’s weird enough that it might work. So I rewrote it that night, that my character’s been secretly working on a Dracula opera, and that’s how that happened,” said Segel in an interview with Fresh Air.

Russell Brand landed the role of Aldous Snow without even trying! He showed up to the audition without reading the script and asked what the role was about. “[I]n walks Russell Brand in his full regalia. He’s wearing leather pants, he’s wearing a shirt unbuttoned to his navel and just like – it must have been three pounds of necklaces and his hair all teased. He’s wearing eyeliner – I mean just totally wrong for the part. And he walks in and he has the nerve to look at me, the writer, and he said, you’ll have to forgive me mate, I’ve only had a chance to take a cursory glance of your little script. Perhaps you should tell me what it is you require?” said Segel.

5. The Character of Aldous Snow

It’s hard to imagine anyone else in the character of Aldous Snow on Forgetting Sarah Marshall, but when Jason Segel wrote that role he had a Hugh Grant-like character in mind. He ended up changing the part after he met Russell Brand during auditions. “I literally went home that night and rewrote the movie for Russell Brand to be a British rock star…Russell has, like I said, that quality of just not caring what other people think or at least seeming like he doesn’t. And I thought what an amazing quality to have in your girlfriend’s new boyfriend, someone who like – it’s not that he’s a jerk, he just doesn’t even feel weird or bad that he’s dating your girlfriend,” said Segel in an interview on Fresh Air.

There’s no denying many viewers were shocked to see full frontal nudity in the film Forgetting Sarah Marshall, and even more so when they realized it was Jason Segel! But no one was more surprised than Segel’s mother. According to him, he forgot to warn her about the scene and so when she saw it for the first time, she cried! To spare the rest of his family the same after-shock, she sent out a mass email to all his family members with a cautionary warning that read: “I would like to inform you all that Jason has chosen to do full-frontal nudity, however, it is not gratuitous and is essential to the plot.”

While Jason Segel’s full frontal nudity was totally real and took a lot of people by surprise (including his own mother), none of the female cast members ever showed any real nudity in the film. Director Nick Stoller said when Segel’s character, Peter, finds a picture of Rachel (Mila Kunis’ character) topless in the washroom, it’s not really her. “Well, Mila Kunis didn’t. That picture was created on the computer. I hope that doesn’t ruin a lot of people’s fantasies,” he joked.

Mila Kunis went in to read for a part in Forgetting Sarah Marshall nine months before production. She was invited to the table read after she’d unsuccessfully auditioned for a role in Apatow’s previous film, Knocked Up. “It was one of those table reads where a bunch of actors get together and you just hear the script out loud to see if it’s going to be made and if it is, by who. That type of deal. It was for Judd [Apatow], and I met with Judd and Shauna [Robertson] previously. I’ve always wanted to work with them,” she said in an interview with ThoughtCo. This role was extremely important to her career because it was the first role that transitioned her from television to film and sparked a slew of other film roles.

1. The Director Accidentally Made Fun of Kristen Bell

Jason Segel and director Nick Stoller ended up accidentally making fun of Kristen Bell while directing a joke at her character. Peter and Aldous start making fun of Sarah Marshall for starring in a ridiculous movie about cellular phones killing people, but what Segel and Stoller didn’t realize was that Bell actually starred in a movie with that same premise — the 2006 film Pulse. After reading the script, Stoller told MTV Bell was convinced they were intentionally trying to make fun of her. “We had no idea she had done a movie that had the premise of a killer cell phone. We just thought it was a funny idea that seemed in line with all these Japanese horror remakes. And so it came out totally randomly,” said Stoller.