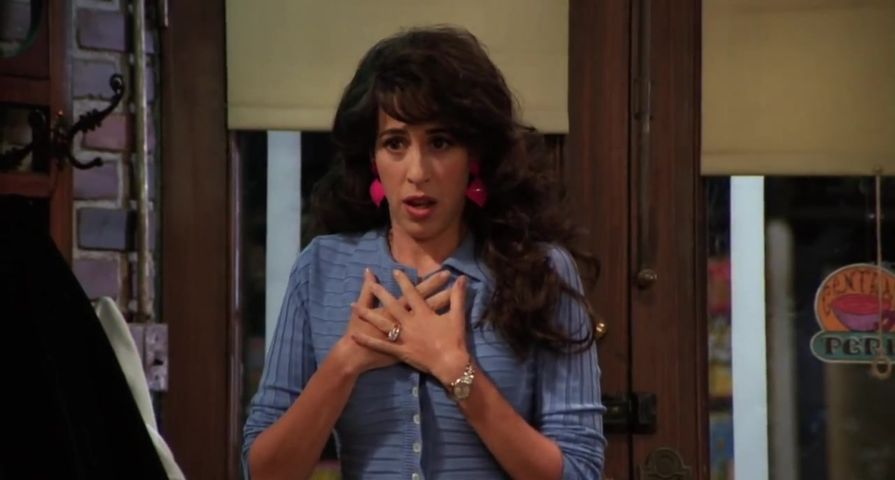 The success of Friends was largely due to the ensemble cast of six young, attractive actors that had just the right chemistry among the entire group. But it wasn’t just the stars that brought the laughs. Sometimes it was the supporting cast that managed to shine. From relatives to coworkers to downstairs neighbors, the long-running show had its fair share of beloved side characters. Here are 12 of Friends minor characters that managed to steal the show.

If it’s true that every pair of twins has a good twin and evil twin, then you’d no doubt be able to say that Phoebe Buffay was the good twin and Ursula Buffay was most definitely the evil one. Identical twins usually share similar qualities, but where Phoebe was kind, gentle, and utterly genuine her sister Ursula was rude, brash, and not averse to lying whenever it suited her. Long-time fans of the show (and those who watched other ’90s popular sitcoms) will remember that Ursula was in fact a crossover character that originally appeared in the show Mad About You as a waitress at the restaurant the main character’s Paul and Jamie frequent called Riff’s. When Lisa Kudrow was cast in Friends, the show’s producers decided to have a little fun with the dual roles of dramatically different twins Phoebe and Ursula.

Joey’s road to success on Friends didn’t always go smoothly as he competed in the cutthroat world of acting. Thankfully, he had an experienced agent working behind the scenes in Estelle Leonard. Dutifully tracking down any appropriate audition or acting opportunity that comes along for Joey, she was a throwback example of the stereotypical old-school agent. Chain-smoking while working her connections and network that have come from countless years in the business, she provided as many laughs and entertainment as the main characters any time she appeared.

As the superintendent for Monica and Rachel and Joey and Chandler’s apartment building, Mr. Treeger was always on hand when the friends needed him. And at one point when Joey arranged to teach Treeger how to dance in return for letting Monica and Rachel keep their illegal sublease, the actor and the maintenance man ended up dancing their nights away on the building’s roof top to everyone’s delight, especially fans of the show.

No one would try to claim that Friends’ Chandler Bing had a normal upbringing, but just because your parents are unusual, doesn’t mean they’re not totally awesome. Such is the case with Chandler’s mom and dad, Nora Tyler Bing and Charles Bing. Chandler’s mom is the vivacious Nora Tyler Bing who’s famous for being the wildly successful author of titillating smut-type books. Her personality matches her writing style, which is a constant source of grief for her son. Chandler’s father, on the other hand, prefers the stage to the written word and is in fact the headliner of a Las Vegas drag show, which young Chandler himself used to appear in. The pair are definitely a dynamic duo, whether appearing alone or together and it was a delight for fans every time they showed up on-screen.

Another pair of parents who made their mark on the popular show were Ross and Monica’s mom and dad, Jack and Judy Gellar. The Long Island parents regularly made their way into the city to see their son and daughter and each time they did, they brought along tons of laughs. Judy embodied the uptight mother who never quite approved of anything her daughter did but doted on her son. Jack, on the other hand, was laid back and easy going and takes on the role of the lovable dad who’s just a little bit dopey at times.

When Phoebe fell for David the scientist (played by the hilarious Hank Azaria, known for his many voice characters on The Simpsons and parts in movies like Along Came Polly) she thought that she had found the love of her life. But when David was offered a once-in-a-lifetime impossible-to-turn-down opportunity to advance his scientific work, he left Phoebe on New Year’s Eve in order to fly off to Minsk. Occasionally popping back into the show’s storyline to provide romance or drama or love triangles, David established himself as a fan favorite.

If David the scientist hadn’t flown off to Minsk for his years-long research and left the heartbroken Phoebe behind, the two might have ended up together for the long run. But he did leave and that left open an opportunity for Mike Hannigan to capture Phoebe’s heart. Played by the wildly popular Paul Rudd, the role and the character was as endearing and charming as the actor himself.

If fans of the show thought Phoebe was uniquely quirky, they soon discovered that it was a family trait when the series introduced her little brother Frank Buffay Jr. Played by Giovanni Ribisi, Frank is weird and friendly and hugely devoted to his family. He’s a hard worker, if not quite the sharpest tool in the box. From the time he first appeared as an awkward teenager hoping to connect with his newly found half-sister to the end of the series when he’s a dad to three rampaging triplet kids, Frank was almost as beloved by fans as his big sister was.

Fans of the show weren’t the only ones who adored Phoebe’s little brother. Alice Knight came onto the show as Frank’s girlfriend and former Home Economics teacher. She was 44 and he was just 18. Jeepers! But the duo won the audience over while winning Phoebe over and soon the older bride became Alice Knight Buffay and a member of the Friends’ family.

Mr. Heckles was an early side character on the show that is still recognized at the mere mention of his name. Living in the apartment below Monica and Rachel’s, he was always insistent that they made far too much noise and expressed his displeasure by banging a broom against his ceiling, their floor. That is, until he died and left his upstairs neighbors with an apartment full of randomness and crap. “Goodbye, Mr. Heckles. We’ll try to keep it down.”

Appearing in almost as many episodes as the stars of the show themselves, Gunther made his mark as the bleach-blond coffee slinger of Central Perk. Pining for Rachel for the entire run of the show and even managing to involve himself in the break-up fiasco between Ross and Rachel, Gunther wasn’t always as benign as he seemed. When he stepped out from the background, Gunther asserted himself as one of the most popular minor characters of the Friends ensemble.

Janice was one of those characters that audiences love to hate and hate to love. But love her they did, which is why she appeared on the show again and again as both an on-again-off-again girlfriend for Chandler and even one time companion of Ross. With a distinctively nasal voice that was ear-piercingly whiny and a fashion sense that set her apart just as equally as her sound, she was a super popular major-minor character on the long running show. “OH … MY … GAWD!”