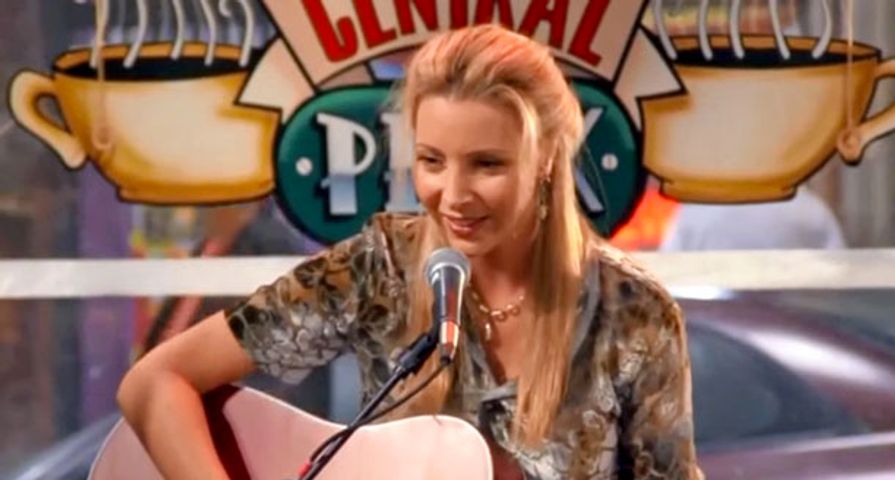 Phoebe Buffay charmed audiences on every episode of Friends with her quirky style, her eccentric  yet totally genuine personality, her signature singing, and her downright all-around lovable-ness. Played by the brilliant Lisa Kudrow, more often than not, Phoebe had the ability to take the spotlight away from the other five actors with her impeccable comedic timing and hilariously on-point delivery. Here are 11 times Phoebe stole the show on Friends.

When Ross decides he’s going to pay tribute to his little sister and best friend when Monica and Chandler tie the knot, the pair is less than enthused about the idea when they find out he wants to play the bagpipes (which, really, he can’t play in any way that actually sounds like music). They may not let Ross perform at the wedding, but he still gets to show off his bagpipe skills (or lack thereof) to his friends and Phoebe is more than happy to sing along. “Celebrate Good Times” turns into a screech-fest that is totally awful auditory-wise and absolutely adorably Phoebe-ish. As can be expected, there were many times the actors themselves couldn’t keep straight faces, which is the case with Jennifer Aniston who couldn’t stop laughing and her reaction was kept in.

When Monica and Chandler score a sweet retro Ms. Pac-Man arcade game for their apartment, it causes excitement among the friends who can’t wait to start playing. Chandler is just as mature as always when he fills the top score spots with initials that spell out naughty things. Ross is less than pleased since little Ben is expected soon so Aunt Phoebe takes over to win her way to replacing each dirty item with her own initials. Just when she’s about to win the last spot, she loses and lets loose a wild rant of swear words and curses not suited for young ears. Of course this is the moment that Ross walks in with Ben and the laughs are almost too much to take.

Life for fictional young Phoebe wasn’t easy and for a time she found herself living on the streets doing whatever she needed to in order to get by. Surviving on the streets of New York made her do things she would later be less than proud of, especially when she realizes that a young nerdy kid she once mugged was actually Ross. She manages to makes amends but, in the process, brings the audience another show’s worth of laughs.

8. The Phalange Saves The Day

With the series ending and Rachel boarding a plane to head off to a new job and life in Paris, Phoebe manages to save the day when she stalls the plane long enough for Rachel to de-board. By causing a commotion and freaking out fellow passengers with the claim that there may be “something wrong with the left phalange” (the what now?), Rachel is able to get off the plane and get to Ross while fans of the show got another epic comedic moment from Phoebe.

Monica and Chandler do their best to keep their relationship private when they first get together, but their best ends up not being good enough. When Phoebe and Rachel accompany Ross to the “ugly naked guy’s” apartment in the building across the way Phoebe spots Monica and Chandler making out while looking out the window. “They are doing it! My eyes! My eyes!” Rachel, who already knows about the secret relationship, frantically tries to calm Phoebe down before Ross returns, but it’s not before anyone watching the show is already belly laughing uncontrollably.

Once Phoebe discovers what’s going on between Monica and Chandler she can’t resist having a little fun at the expense of her two friends. Despite Joey’s best efforts to get everything out in the open, Phoebe and Rachel decide it would be a heck of a lot more fun to mess with their secret-keeping friends. On the other side, Monica is too competitive to let them win so the game is on and the laughs just keep coming.

Delivering hilarious lines masterfully can bring big laughs to any sitcom, but when you throw in physical comedy too, things can just go right over the top in the best kind of way. Lisa Kudrow was brilliant at this more often than fans may realize until they re-watch some of her most epic full body flaunts. Case in point: Phoebe’s running. When Rachel and Phoebe decided to head out for a run with each other, Rachel is more than a little shocked – along with everyone else around them – to witness Phoebe’s seemingly spastic running style. When ‘Pheebs’ later explains that she runs the way she does because it’s how she ran as a child and that makes her happy, it becomes just one more charming aspect of the lovable character although remains just as funny when she continues her wild jogging ways and Rachel joins right along (granted, only to run face first into a police horse).

Meeting a boyfriend’s parents for the first time can be nerve-racking, stressful, and intimidating at the best of times. When you’ve never met any boyfriend’s parents at all – like never ever – and it turns out your guy’s parents are uber-rich uptight snobs, then you’d be where Phoebe found herself when she met Mike’s parents for the first time. Despite her social awkwardness, Mike’s parents boring friends, a carnivorous meal served to a vegetarian, puking in a closet, and mentioning pimp spit, Phoebe and Mike end up leaving more in love than ever and audiences are left laughing wildly.

Phoebe usually managed to steal the show for her hilarious ways, but when she and Mike tied the knot, fans of the show were wiping away sentimental tears instead of tears of laughter. The wedding, which happened during a snow storm that cut off the city from most of the invited guests and other attendees, the winter wonderland that the two ended up in for their ceremony was just as unique and lovely as the bride herself.

When Phoebe finds out she has a brother, she’s thrilled. When she finds out that he’s involved with his much older former teacher, she’s shocked. When her brother and his wife ask Phoebe to be their surrogate and carry their baby for them, she’s…well, she’s one heck of a big sister. Not something that everyone would be willing to do, Phoebe ends up with three little bundles of joy for her brother and sister-in-law and from the time she’s first asked to the time the babies are born, Phoebe’s pregnancy with the little ones is full of fun and laughs. When they’re born, even Phoebe is beyond charmed and whispers to Rachel, “I want to keep one!” and then has one of the most emotional moments saying goodbye to them.

When you think of Phoebe Buffay, how can you not think of Smelly Cat? Phoebe’s signature musical style might not have suited everyone’s tastes, but fans of the show loved her quirky tunes. From Two Of Them Kissed Last Night (remember the one referring to Ross and Rachel while he was still with Julie? Yikes!) to The Cow In The Meadow (where the farmer bonks it on the head and the kids find out where their dinner really comes from) to Jingle B*tch (who stole Phoebe’s work) not to mention Sticky Shoes and Ode To A Pubic Hair (ew! ew! ew! lol!), they were all Phoebe-esque masterpieces. But above all, through the years, Smelly Cat was always the fan favourite and even made its way into Phoebe’s own music video (despite the fact that she finds out they dubbed her voice). Smelly cat, smelly cat, what are they feeding youuuuu….