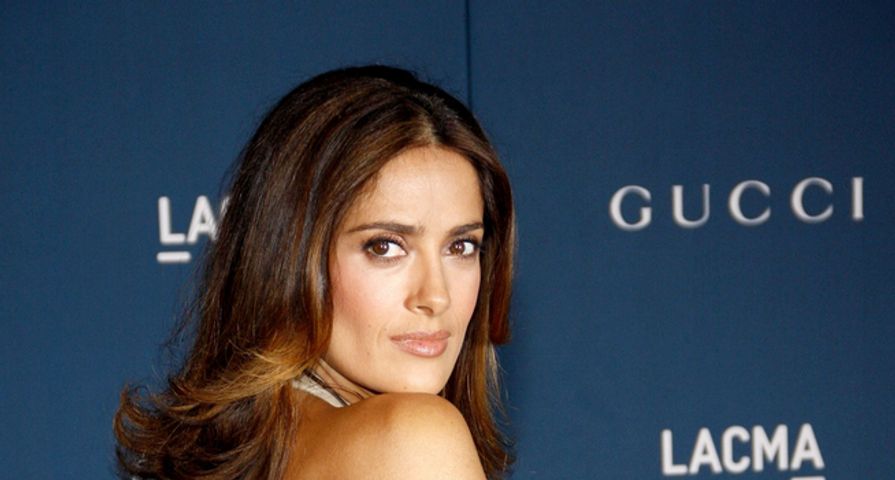 Actress Salma Hayek is like Hollywood royalty. She’s been doing the Hollywood thing for over two decades and she’s also branched out into directing and producing. She’s definitely a force to be reckoned with! She’s about to turn 50 – and she still looks like she isn’t a day past 30 – so we figured we’d celebrate with 11 facts fans of hers probably don’t know about her!

Salma Hayek Jiménez was born into an affluent family in Coatzacoalcos, Veracruz, Mexico. Her father, Sami Hayek, was a Lebanese oil company executive and owner of an industrial-equipment firm and her mother, Diana, was a Spanish opera singer who funded a music program for children for lower income families. At the age of 12, she was sent to the Academy of the Sacred Heart in Grand Coteau, Louisiana and then briefly attended Universidad Iberoamericana, a university in Mexico City, where she studied International Relations.

After briefly attending university, the Oscar-nominated actress dropped out to pursue an acting career. Her first role was a small part in a Mexican soap opera, Nuevo Amanecer (New Dawn). The following year, she landed the title role in the soap opera Teresa, which made her a star in Mexico, and earned her an Ariel Award nomination for her performance.

In 1991, the Mexican soap opera star – who was barely fluent in English – moved to Los Angeles to further her career, but no one would hire her. “I had studio heads say to me, ‘You could have been the biggest star in America, but you were born in the wrong country. You can never be a leading lady, because we can’t take the risk of you opening your mouth and people thinking of their maids,’” she told Vanity Fair.

Despite acting in a string of films between 1995 and 2002, including Desperado, Fools Rush In, The Faulty and Dogma, Salma’s real breakthrough role was in Frida, a biopic about the Mexican artist Frida Kahl, which she also co-produced. Getting the movie made wasn’t an easy feat. It took about eight years for her to pull this project together and it was worth it. She received her first and only Oscar nomination for her performance.

She is married to French billionaire Francois-Henri Pinault. Together they have one child, Valentina, who was born in 2008 when Salma was 41. Shortly after she gave birth to Valentina, the actress and her billionaire fiancé, who she had been dating since 2006 and got engaged to in 2007, called off their engagement. In February 2009, however, they surprised everyone by getting hitched in a civil ceremony in Paris, France. They then had a second ceremony in April 2009 in Venice.

The Frida star was the executive producer for the television show Ugly Betty. She adapted the series from the Colombian telenovela Yo Soy Betty La Fea, which aired in 2001. The series, which was picked up by ABC, ran from 2006 to 2010 and picked up the Golden Globe Award for Best Comedy Series in 2007 and earned Salma a Emmy nomination for Outstanding Guest Actress in a Comedy Series for her performance as Sofia Reyes, a magazine editor, that same year.

In her 20s, before she made it big, she struggled with acne. “I had acne. And this acne was so bad, it sent me into a severe, severe depression. Like I couldn’t leave the house,” she told Lucky magazine. “I’d wake up in the morning and lie there and touch my face before I got up, just to prepare myself to look in the mirror. The next stage with that sort of depression is food: too little, or too much. Guess what I did? I mean, I was fat and broken out, I couldn’t leave the house and I couldn’t pay the rent!”

At this point, the Bandidas actress isn’t using Botox, chemical peels or fillers to keep her skin looking young and vibrant – she’s using something else. “I use an ingredient called Tepezcohuite that’s used in Mexico for burn victims because it completely regenerates the skin, and there’s no one in the States who is using this ingredient except for us,” she told Elle. “Some of the ingredients, when I took them to the American labs, they were like ‘Oh my god! How come nobody is using this?’ This is why I have no Botox, no peels, no fillings. I’m 48. I will be 49 this year and I only use my creams.”

The After the Sunset actress’ dog, Diva, once saved her life. She had a headache and went to lie down when she was suddenly woken up by Diva, who was frantically grabbing her sleeve and trying to pull her out of the house. It was then that she realized that the gas was on in her house. If her dog hadn’t woken her up, she could have died.

Hayek is a Hilary supporter. “She is levelheaded. She is kind. She has a heart. She’s human. She’s smart. But nothing brings her down. They’ve been trying to put this woman down for 30 years. She’s indestructible. She gets up with grace. And she gets things done with grace – not bullying. And the thing is, she doesn’t oversell a fantastic dream,” she told The Daily Beast. “I think she tells you what she thinks can be done, and I think she will surprise us by doing much more than that. I think the things she’s saying aren’t only to catch votes.”