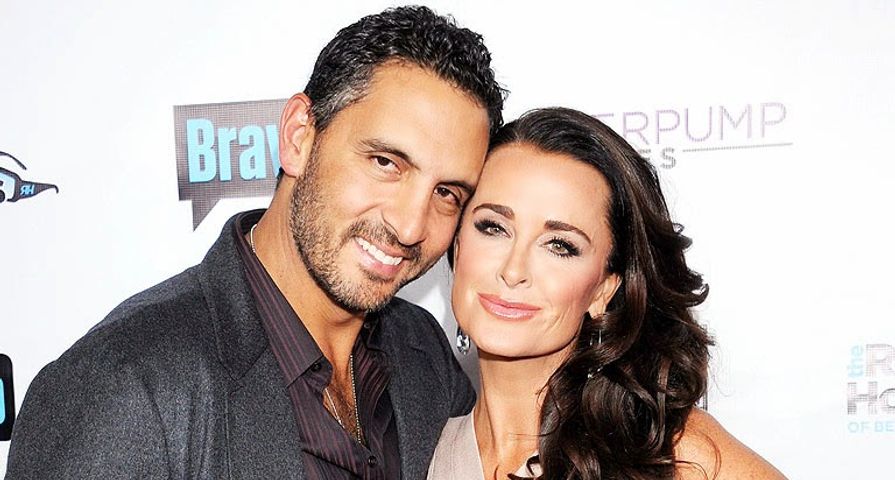 Kyle Richards is one of the long-standing cast members of Bravo’s reality series, The Real Housewives of Beverly Hills. She has starred on the show for the past 7 seasons, as Mauricio Umansky, her husband of over 20 years appears by her side. Fans of the show get an inside look at their relationship, and we must admit, it’s one of the cutest we’ve seen! In honor of their upcoming 21st wedding anniversary, here’s 10 things you probably didn’t know about their relationship!

Many viewers might not know that when Mauricio and Kyle met, she was engaged to someone else! The Real Housewives of Beverly Hills star had agreed to marry a man named Michael Tuck, who was 24-years her senior. Tuck was a news anchor on CBS from 1990 until 2000, and according to Richards, was very good friend with Harvey Levin from TMZ. She even admitted to turning her ring around when she met Mauricio and said it was the best decision she’s ever made! She broke off her engagement with Tuck after she met Mauricio, and they’ve been together ever since.

It was a whirlwind romance for these two as they ended up getting married while Kyle was four months pregnant with Alexia. She married the real estate mogul on January 20th in 1996. Alexia is Kyle’s second child, but her first child with Mauricio.

Making a marriage a success is a lot of work, especially when it’s been 20 years! In an interview with Bravo, Kyle said one of the ways they keep the romance alive in their marriage is by having date nights. These nights are reserved for conversation that doesn’t revolve around their kids. “I try to make a point when my husband and I have date night to not just talk about our kids because it’s really easy to do that. We’re obsessed with them. Sometimes even talking business is a connection ’cause I know that my husband likes that, and I know that he likes that I know about that. Also sharing my adventures with him that I know he’s very proud about, so even that can be a weird romantic thing,” she said.

In addition to previously being engaged, Kyle Richards was also briefly married before she met Mauricio. Kyle married her oldest daughter’s father, Guraish Aldjufrie, in 1998 when she was only 18 and pregnant with Farrah. Their marriage didn’t last long and they separated only two years later in 1990 and then divorced in 1992. Despite the fact that she has a very close relationship with her step-father, Mauricio, Farrah still keeps in contact with her dad, but he lives in Indonesia.

Viewers of The Real Housewives of Beverly Hills know that Kyle Richards’ relationships with her sisters, particularly Kathy Hilton, are strained. We know why her relationship with Kim is often on the rocks (no pun intended) as it played out on the show, but we’ve never actually heard Kyle explain why she isn’t close with her older sister, Kathy. According to reports, which have also been confirmed by Kyle’s former cast mate, Brandi Glanville, the issue lies between Kathy’s husband, Rick, and Mauricio. This would explain why last season Mauricio wasn’t invited to Nicky Hilton’s wedding. Apparently Mauricio used to work for Rick, but when Rick wouldn’t make him partner, he left. There were issues around Mauricio taking clients and staff with him when he left which has caused a rift between Kyle and Kathy as they both defend their husbands.

Like many other celebrities in the limelight, Kyle and Mauricio’s relationship has been riddled with rumors of infidelity, but both Kyle and Mauricio remain adamant these are just rumors. None of these rumors have ever been proven. In 2013 the couple received the worst of it as their names were thrown into headlines of every gossip magazine, and it still continues on today in some publications. Star magazine alleged from a not-so-trustworthy source that Mauricio was seen exchanging phone numbers with a female fan, but Kyle responded on Twitter and said: “There is no trouble in paradise. I was WITH my husband & asked to get that number 4 me 2 get a dress from a designer. Don’t promote their sick lies please. They will have their karma in time.”

It’s pretty clear from watching Mauricio and Kyle on RHOBH that they have a pretty solid relationship! These two are rarely ever caught fighting or even having a disagreement and Mauricio seems to be a pretty good catch! He’s definitely one of the most liked husbands in the entire Real Housewives franchise, so we’re not all that surprised that Kyle goes out of her way to please her husband. When they got married in 1996, she converted to Judaism for her new husband. Mauricio was raised Jewish, so Kyle does her best to carry his religion into their new family together.

In an interview with Bravo, Kyle revealed their secret to getting in some quality bonding time while raising four daughters in Beverly Hills. According to her, their prime time together is in the morning before all their kids wake up: “I think our biggest bonding time, which is so strange, is when we first wake up in the morning. Because I like to have a little quiet time before I wake the kids up and get them off to school. So that’s when I’ll have my coffee and turn the fireplace on and he’ll come down like 15 minutes later and then we sit and talk … and it’s just our alone time before all the chaos starts.”

In an interview with People magazine last year, the couple were asked what the secret is to having a long-lasting marriage that spans over 20 years while working in an industry riddled with divorce while living in Beverly Hills. The answer is simple — they are best friends! “We’re a really good match. We get along really well, actually better than you see on television!” said Richards. Mauricio then chimed in and admitted that Kyle is his best friend and that they spend a lot of time together. “We’re best friends. We actually enjoy each other. She’s funny, she makes me laugh. I don’t have big guys nights out; Kyle is the person I want to spend most of my time with,” he said.

While in an interview with Andy Cohen, Kyle said her long-time hubby is very romantic, or what she describes as an ‘old-school romantic.’ She said he once told her, “He’s like, ‘You weren’t born until I met you and that’s just the way it goes.'” According to Mauricio, in a separate interview he said his favorite way to spend time with Kyle is to head out to their home in the desert and hang out. “A quiet easy night with nobody around us,” he said.