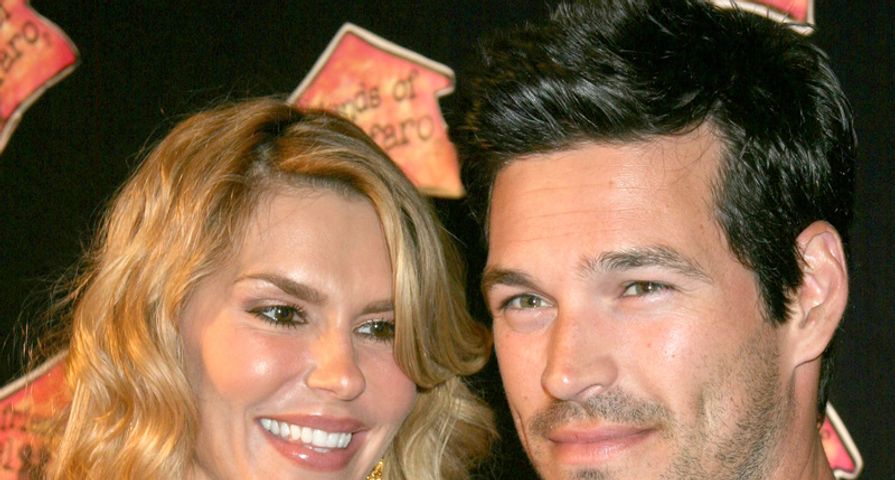 It’s no secret that Brandi Glanville and Eddie Cibrain had one of the most heated divorces in Hollywood. To this day, the exes don’t get along and waste no opportunity to slam each other in the public eye. While details about the couple were widely unknown until Cibrian’s affair with LeAnn Rimes, we dug up a few things about their relationship and how they got together. Take a look at 10 things you didn’t know about Eddie and Brandi’s relationship:

Brandi met Eddie at a nightclub in Los Angeles. She was a model who lived abroad for 6 years before returning to the United States. Eddie was working steadily as an actor at the time with roles in The Young and the Restless, Baywatch Nights, and Sunset Beach.

Eddie proposed to Brandi on New Year’s Eve in 1999. The engagement ring included a 3-carat diamond ring. Their engagement lasted for a year and a half.

The couple married in 2001. Around 200 friends and family gathered for the ceremony, which took place along the beachfront at the Ritz-Carlton in Laguna Niguel, California. Glanville’s wedding dress was custom designed by Reem Acra, and Cibrian wore a tuxedo by Armani.

When Eddie scored his role on Third Watch, the couple relocated to New York City, where they lived for 5 years. During this time, Brandi continued working as a model with Elite Model Management, the agency she had been working with while in Los Angeles and abroad.

In 2009, Us Weekly broke the news that Eddie was having an affair behind Brandi’s back. The actor was working on a made-for-TV movie, Northern Lights, when he started a steamy affair with his co-star, country singer LeAnn Rimes. After 8 years of marriage, Brandi had a hard time coming to terms with the fact that her husband had cheated. “It was so bizarre to me because I knew it, but I didn’t want to believe it.” Brandi refused to sweep the issue under the rug, preferring to vocalize her disappointment with her husband. “Well, I could’ve shut the f–k up and I didn’t. I’m a fighter and I’m feisty,” she said on her Unfiltered podcast in February 2016.

Brandi also didn’t make the divorce easy on Eddie, which was her way of making him pay for his betrayal. “That motherf–ker had to work to get my signature!” the Housewives of Beverly Hills star said about their divorce documents. Unfortunately Brandi didn’t fare out too well. After all the legal mess, Brandi didn’t secure the divorce settlement she hoped for. “I got nothing,” she said on her podcast. “I think it makes you work harder because you realize no one’s going to do it for you. Like, get it together.”

Another downside of the divorce was that the feuding couple’s children were caught in the middle. Glanville and Cibrian have 2 sons together, Mason and Jake, who had to adjust to a new family dynamic. By 2009, the children and Cibrian moved in with Rimes at her Malibu home.

Even when the divorce was finalized, Glanville had a difficult time moving on. In her 2013 memoir, Drinking and Dating: P.S. Social Media Is Ruining Romance, she opened up about her obsession with following Cibrian and Rimes’ relationship. “When I first discovered the benefits of technology and social media, I used it to obsess about my husband, his future wife and our children throughout our breakup and divorce,” she wrote. “It turns out the internet can be your worst enemy. Especially when you spend most of your time googling medical conditions, surviving cheating, or reviewing the twitter feed of some c–t-ry music singer who likes to post countless pictures of your children #StillBugs.”

When you go outside to chill, lay on top of the hot tub and then the boys come out and want to get in….they told me to stay and removed the two side pieces. LOL

To this day, Glanville continues to criticize Cibrian for his affair. In her book she wrote, “He [Cibrian] screwed half of Hollywood and I’m the one with this bulls–t motherfucking label?” She added, “I’m the crazy bitch because he couldn’t keep his d–k in his pants to save his life-or, at the very least, his marriage?” When asked why she continues to dwell on the affair, Glanville said it’s because she’s decided to take a strong stance. “I think that it’s because a lot of women and men kind of brush it under the rug, and not a lot of them take the low road and fight back,” she said.

In January 2016, Glanville told PodcastOne’s Nik Richie that she still had a problem with Rimes. “We still battle, don’t get me wrong. I have an issue with her posting pictures of my children on holidays. It’s horrible. If my ex-husband, if their dad isn’t posting pictures, why is she?” Cibrian was none to pleased with her comments. He told People that Brandi blew the whole thing out of proportion. “She lies for the sake of publicity and she has to bring in my wife unfortunately for it to make headlines. It isn’t fair. She never asked LeAnn to not post pictures of the kids during the holidays, ever. They don’t even talk!”