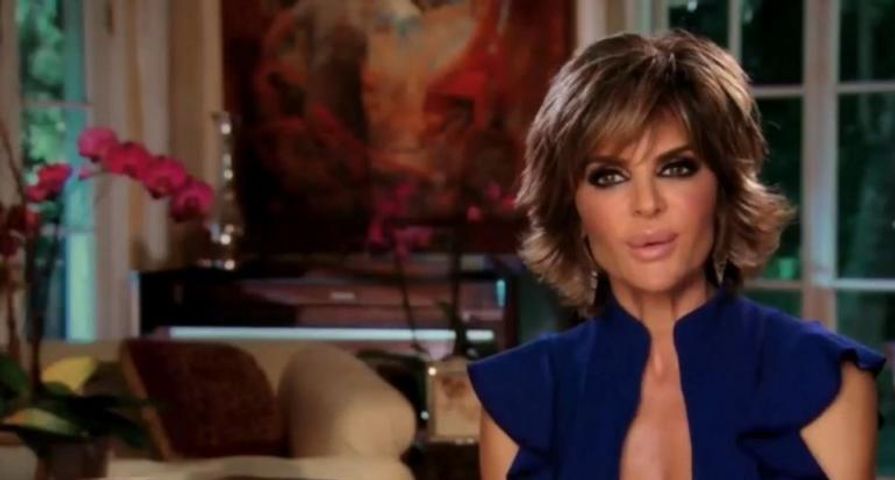 Lisa Rinna is still relatively new to the cast of Real Housewives of Beverly Hills, but when it comes to being on television, she’s a veteran. The former actress and television host is best known for her role on the popular soap opera Days of Our Lives and primetime drama series Melrose Place, and her hosting gigs on Soap Talk and TV Guide Network. Her current spot on Bravo’s hit reality series is what has pushed her back into the limelight. Despite Lisa Rinna’s prominent name in the entertainment industry, she’s one of the realest housewives. She’s like a breath air on the show because she doesn’t sugar coat the truth and seemingly puts it all out there for her fans to see. Her hilarious sense of humor and her ability to voice what the rest of us are thinking is quite refreshing! Lisa has a lot of great one-liners and memorable moments from the show, but here’s a quick list of her best!

Lisa Rinna’s lips are her signature trademark. She doesn’t deny it or play it down, she owns it. In fact, she even said on the show, “If you don’t think of lips when you think of Lisa Rinna, there’s something wrong.” This is the most refreshing quality for a reality star, especially a ‘real housewife.’ She uses the fact that people talk about her lip injections, which she admits she got when she was only 24 years old, to her advantage by using them as a punch line for jokes. She even made her introducing tagline for the show, “My lips were made for talkin’ and that’s just what they’ll do.”

No one can deny that Lisa Rinna isn’t a straight shooter, she’s out to get the truth (even if she’s wrong in some cases). Last season she was ruthlessly trying to figure out why no one would talk about the fact that Kim Richards was an addict. She said in one of her interviews, “I can’t just sit here and watch the bullsh-t train go by.” Amen, sister. More recently, Lisa Rinna ran into an old friend Kathryn Edwards while filming and, in her on-camera interview afterwards, Lisa pointed out how beautiful the former model looks despite her age: “She’s either sold her soul to the devil, or she has some sort of special cocktail that she drinks, because she looks exactly the same.” Then she proceeds to give a double bird-flip to the camera.

In the midst of her lavish Beverly Hills life, Lisa still maintains a somewhat normal household. Her two daughters have appeared briefly in a few episodes, during which Lisa explains how hard it is to raise a family in Beverly Hills around so much wealth, but she does her best to instill good manners and a bit of normalcy in her children. To put it bluntly, Rinna said: “I’m trying to keep them from becoming snotty little a–holes.” And when she described being a mother to two teenage daughters (we’ve all been a bratty teenager at one point) she said, “sometimes I feel like I’m on an acid trip. Though I’ve never taken acid, I imagine this is what acid would feel like.”

We all remember the episode when Lisa Rinna was trapped in the car with an inebriated Kim Richards. Kim was jumping from subject to subject, one minute she was talking about one thing and the next she was attacking Lisa Rinna. Lisa remained very poised and calm throughout the whole thing and did not antagonize Kim at all or question her on her sobriety. However, in her one-on-one interview afterwards, she poked fun at the situation and Kim’s odd behavior. When Kim started acting strange Lisa said: “It’s wackadoodle time,” and described Kim as “nutso. Like cuckoo bird for cocoa puffs.”

In season 5, the ladies are all invited to Amsterdam with Yolanda. After dinner on the first night, they all go to a coffee shop and order what is known as a “space cake” because it is baked with marijuana. Lisa is one of the few women who take a bite of the cake and when asked about how she’ll explain the situation to her daughters afterwards, she said: “I have two children and they know that I never pass up a piece of cake…ever!”

Lisa Rinna was one of the new housewives on the scene in season five, so during the first episode the viewers had to get acquainted. During her first interview, Lisa introduced herself and said: “I’m an actor, I’m an actor/entertainer. I don’t know what the f-ck I am.” At least she’s honest!

4. She’s The Voice of Reason

During the episode “Wining and Dining,” the ladies are all still becoming acquainted with one another. However, Brandi learns about Eileen meeting her husband through an affair and during a group dinner, she ends up throwing her glass of wine in Eileen’s face. Afterwards, Lisa Rinna said to Brandi what we’ve all been thinking for a long time now: “You’re kinda f-cking crazy.” And of course, Brandi simply replied, “And cheers to that.” Clink.

Okay, so this one is a little controversial, but the good thing we can pick out of this memorable moment on the show is that Lisa Rinna defends her family’s honor. While the women were vacationing in Amsterdam, during the first night, Kim Richards and Lisa Rinna got in a fight. Kim was fed up with Rinna discussing her sobriety, and so she began insinuating that Lisa’s husband Harry did “something,” but refused to say what exactly ‘it’ was. The running joke for the rest of the season was “#WhatDidHarryDo,” because apparently even Lisa had no clue! The fight turned nasty and Lisa ended up smashing her wine glass on the table in a fit of rage, telling Kim not to talk about her husband. Lesson learned here: Don’t mess with Lisa Rinna’s family.

Lisa Rinna isn’t afraid to admit that she’s aging and that it takes a lot of work to keep up with the beauty standards associated with women in Beverly Hills and when working on-camera in the entertainment industry. She discussed getting ready for her hosting job on Access Hollywood and admitted: “I’m going to make sure that I stay looking fresh as a f-cking daisy.” We love the honesty Lisa!

In season 5, Lisa allowed cameras to follow her on a trip back to her hometown in Medford, Oregon while she visited her ailing parents and help her parents pack up their home before moving. She recanted what it was like growing up in a small town and how it never felt right for her which is why she moved to Los Angeles. Lisa recalled thinking one day while growing up: “Why am I here? I’m more fabulous than this.” You just can’t cage fabulous.