Home » The Bold and the Beautiful » Bold And The Beautiful: 12 Truly Underwhelming Storylines 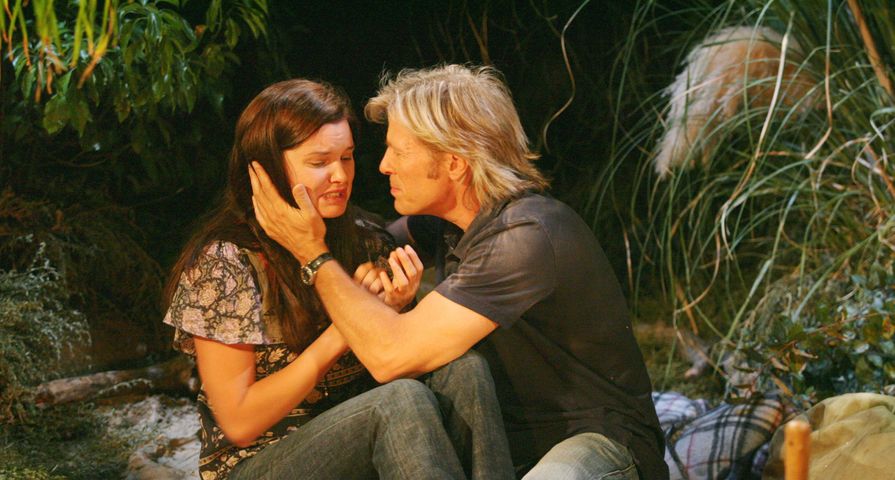 The Bold and The Beautiful (B&B) has had many engaging and even sensational narratives since it first aired 31 years ago. But there have also been other plots, like the return of a legendary scoundrel and a couple of whodunnits, that should have been memorable, but ended up being frustrating, anti-climatic and huge let-downs. Below are the B&B’s 12 truly underwhelming storylines.

12. The Passing of Darla

Darla had just finished throwing a 4th birthday party for her daughter Aly, when her husband Thorne’s niece called her to say she was stranded on the side of the highway with a flat tire. Unknown to Darla, Phoebe had also called her mother, Taylor, who’d had a couple of drinks earlier in the day and was now rushing to her daughter’s aid. It was a foggy night, and as Darla was changing Phoebe’s tire, Taylor’s vehicle came speeding towards her. Taylor hit Darla and she died in hospital shortly afterward. This storyline was a huge letdown to fans as B&B lost a favorite character and a solid couple (Thorne and Darla) at the same time.

Steam fans were thrilled that their favorite couple were on their way to becoming parents. But one day, Steffy visited her brother Thomas at Taylor’s former beach house, unaware her rival Hope was also there. After telling Thomas about how happy she and Liam were together, a heart-warming scene with Hope occurred, in which Hope told her she was happy for her. They hugged it out and Steffy was anxious to get home to Liam. She knew there was a traffic jam on her route home, so she hopped on her motorcycle, even though she had promised Liam she wouldn’t ride it. A car cut her off and she wiped out. She was admitted to the hospital and lost the baby. This storyline was underwhelming from the get-go, as viewers asked the inevitable question – what mother-to-be in her right mind would even consider riding a motorcycle?

Once Ridge was happily married to Taylor, again, Brooke and Thorne grew closer. Suddenly, Brooke started looking at Thorne in a whole new way. She’d always thought of him as a good friend and confidant but suddenly she developed romantic feelings for him and the feeling was mutual. Stephanie had a stroke when she found out about the relationship and Thorne moved on with Macy. He and Brooke eventually got back together, which caused a car crash that injured Brooke and ended Macy’s life. So, after fighting for years to be with Thorne, Brooke finally married him, with the blessing of his mother Stephanie. Soon after though, the marriage was annulled when it was discovered that Macy was still alive. Brooke then decided she’d been in love with Ridge all along. It was an underwhelming ending to a storyline that had a lot of potential.

Brooke unknowingly donated her eggs to Nick and Taylor, who were hoping to conceive a baby through a donor match. Only recently married, Taylor hoped to have a child with Nick but found out she was unable to conceive. The doctor in charge of the fertility treatments was none other than Nick’s ex-wife and Brooke’s daughter Bridget. Bridget asked for the Marone eggs, but unfortunately, both sets of donor eggs were labeled B. Marone and Taylor was inseminated with Brooke’s eggs. Viewers were frustrated by this storyline as the whole premise of it was too elaborate to be believable.

Another disappointing storyline to come out of the egg donor switch-up was Brooke getting custody of her bio-son Jack in 2008. Because Taylor knew he was Brooke’s son, she was never able to bond with him, so she handed him over to Brooke. Writers had a great opportunity to pursue a storyline that examined problems for Brooke in the aftermath of this decision. Ridge did have a few concerns with his half-brother Nick being Jack’s father, but he eventually accepted the child. Once this happened though, Jack vanished and has not been heard from in years. To this day, the character is never mentioned – it is as if the child never even existed.

It was bad enough that Brooke had already slept with her daughter Bridget’s husband Deacon, but then to sleep with her sister’s husband Bill? Katie suffered from post-partum depression, and because of her heart condition, thought she wouldn’t be around long enough to see her son Will grow up. So, she pushed her sister and Bill together. Once her depression was over, she started to see things clearly and wanted to stay married to Bill. But when she found Bill at Brooke’s house one evening (he was only there because he’d had too much to drink), she took off her wedding ring and said she wanted a divorce. This storyline was underwhelming because Brooke and Katie had always been close, but the moment Katie told Bill she wanted a divorce, Brooke let her libido lead her, right into Bill’s bed.

Viewers tend to forget that Katie is no saint herself. She shacked up with Nick Marone, her niece Bridget’s fiancé when her doctor told her she was rejecting her heart transplant and she thought she had only days to live. Nick was a stand-up guy and sleeping with his fiancé’s aunt (even though he thought she was dying) was out of character for him. Another disappointing aspect of this storyline was that it broke up Nick and Bridget because Katie found out she was expecting, but she lost the baby soon afterwards.

When Thorsten Kaye took over the role of Ridge from Ronn Moss, the character returned to L.A. and immediately got back together with Brooke. But it wasn’t soon after that he and Brooke’s sister Katie suddenly realized they both shared a love of poetry. Before B&B fans knew it, the writers had Ridge dump Brooke and hook up with her sister. This was a storyline that luckily dissolved quickly, as there wasn’t much chemistry between the actors and Ridge being with Brooke’s younger sister just didn’t sit right with viewers. It was a dissatisfying plot all around.

After Quinn kidnapped an amnesiac Liam and held him hostage in a cabin for months, the repercussions for the wrongdoer amounted to absolutely nothing. Liam’s father Bill, his brother Wyatt and his ex-fiancé Steffy had been looking for him and once he was rescued by Wyatt, Quinn was brought into the police station for questioning but was never actually convicted of anything. Viewers were hoping Quinn would somehow pay for her crime but were annoyed in the end.

Once she was happily married to Eric, Quinn was standing on the balcony of the Forrester mansion when shots rang out. Quinn was obviously the target and the list of potential suspects was great. Katie, who lived next door, and conveniently owned a telescope, was watching her. Just the day before, Katie had threatened Quinn with a gun in Quinn’s office. Viewers also knew that Eric’s ex Sheila Carter was also on the scene. So, fans were disappointed that the actual shooter ended up being Quinn’s ex-husband Deacon, who hadn’t been on the show in months. It was an inadequate, cheap ending to a potentially riveting storyline.

Another unsatisfactory storyline was Sheila Carter’s return to Los Angeles in 2017. Initially, she created some havoc for newlyweds Eric and Quinn but the whole storyline just fizzled out. Once it was revealed she wasn’t the one who shot at Quinn, she then tried to break up the couple by telling Eric that Quinn and his son Ridge were having an affair. Viewers occasionally caught a glimpse of Sheila working as a waitress at Il Giardino, but she hadn’t been seen in L.A. again until 2021.

The list of potential suspects in this whodunnit was boundless, among the perpetrators were Ridge, Sheila, Justin and Bill’s own sons, Wyatt and Liam. So, it was with great disappointment that viewers found out, shortly after Bill was released from the hospital, that the person who shot Bill in the back was Steffy’s mother, Taylor. She had been living in Paris but had come back to L.A. one evening, after she heard her daughter had slept with Bill. Like Steffy’s father Ridge, Taylor was under the impression that Bill had “violated” her precious daughter and her retaliation was a bullet in Bill’s back. Bill agreed to keep quiet about it, for Steffy’s sake, and the holier-than-thou Dr. Taylor Hayes has never had to pay for her crime. Like the “who tried to kill Quinn” storyline, the conclusion to this plot was a second-rate cop-out.