Bold And The Beautiful Plotline Predictions For The Next Two Weeks (January 10 – 21, 2022) 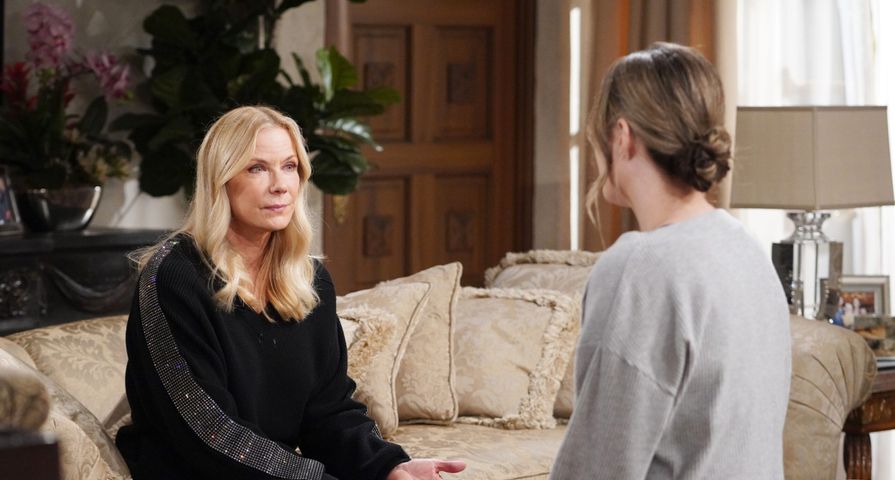 Brooke’s rivalry with Sheila will escalate after Deacon blows the whistle, coming up on The Bold and the Beautiful (B&B). Meanwhile, the arrival of Dr. Grace Buckingham will create waves in her daughter’s love life and Zende’s suspicions might zero in on Carter. Plus, will Taylor get the inside scoop from her grandson, Douglas? We’re speculating beyond the latest spoilers with B&B plotline predictions for January 10th to 21st, 2022.

12. Memories Of That Kiss

Neither Paris nor Carter can stop reflecting on their New Year’s Eve kiss. Do either of them want to jump into a relationship quite yet? It’s hard to say, although their feelings speak volumes. For Paris, Carter is the second sign (after Finn) that Zende just isn’t cutting it. But if his proposal plans were a wake-up call for Ms. Buckingham, his role in bringing her mother to LA might send Paris running out of that relationship.

Once again, Carter will find himself “the other man” in a relationship of his peers. Not only is he also smitten with the memory of that NYE kiss, the Forrester COO will become visibly uncomfortable with Zende bragging about his relationship. Spoilers state that Zende will speculate aloud that Paris might be seeing someone else. Will Carter have anything to confess?

Zende already suspects that Paris’ heart is straying, and he also knows that she and Carter occasionally confide in each other. So when Carter confesses that he already knew about the engagement ring Quinn had designed for Zende, will he be admitting too much? Could Zende begin to suspect that Carter warned Paris about his proposal — and for his own gain?

It’ll be interesting to see how Paris’ mother factors into this storyline, as actress Cassandra Creech will debut on Monday, January 10th as Dr. Grace Buckingham. While spoilers state that Paris will be thrilled by her mom’s arrival, she may be unsettled by Zende’s role in reconnecting them. Is Zende hoping that Grace will push her daughter to settle down?

Is Dr. Grace Buckingham staying for a weekend, or looking to make LA her new home? The announcement came so suddenly that there hasn’t been time for much speculation either way. However, an older and wiser Buckingham in town could realign Paris’ love life in more ways than one. Will Paris insist on introducing her mom to Carter? Plus, a new doctor in town would inevitably connect with Finn, who Paris previously had feelings for.

After trying to bend the ear of Liam and Hope about his Santa sighting, Douglas will finally land a curious audience when he tells Taylor about his eye-witness account. Thomas will likely bring his son by to visit his other grandma, who will take the time to hear him out and realize that Douglas is pretty serious about this! Will Taylor put two-and-two together? If so, will she tell Ridge?

Well aware of her kids’ position that Deacon’s presence led Brooke to fall off the wagon, Taylor will realize that her best lead in pursuing the truth about Douglas’ claim lies with Sheila. If the world renowned psychiatrist can get chummy – perhaps by provoking Ms. Carter’s hatred towards Brooke again – perhaps Taylor will find out if Deacon was with Logan on New Year’s Eve.

Taylor won’t be the only one sleuthing around to figure out if Brooke was alone on New Year’s Eve; Hope will also become determined to find out why her mother relapsed all of a sudden. Hope knows that “someone or something pushed her over the edge”, and she’s going to figure out who or what that is! Guilt-ridden over putting pressure on her mom to accept Deacon, Hope will go into damage-control mode. She’ll warn Taylor and Steffy not to undermine Ridge’s marriage while it’s shaky, and get into an intense argument with Steffy.

4. Brooke On The Hot Seat

When Hope’s ultimatum to the Forresters falls on deaf (or make that defiant) ears, Hope might grow even more desperate to protect her mom from spiralling further. Realizing that Deacon’s disappearance and Brooke’s relapse happened after the very same night, Hope will beg Brooke to open up to her. That kiss with Deacon is eating away at Brooke, so will the whole truth come out?

In a way, yes – although it’ll be a very different truth! Deacon will return during the week of January 17th and, as B&B spoilers put it, tell Brooke the whole truth! Does this mean he’s found proof that Sheila switched out the non-alcoholic champagne, and will blow the whistle on his erstwhile roommate?

Even if Deacon reveals Sheila’s entire label-swapping scheme, Brooke will have to keep certain details under wraps. She’ll want Ridge to know her relapse wasn’t triggered by her poor judgment, but it’ll be difficult to point the finger at Sheila without confessing to Deacon’s presence during her NYE bender. But if Brooke is plotting revenge on Sheila, she’d better hurry…

… Because Sheila is ready to act! Spoilers hint that Ms. Carter will continue to steam over Brooke’s threat to keep Finn and Hayes out of her life forever. And since Sheila’s first attack on Brooke worked like a charm, she’ll now put her second plan in action. Will Sheila drug her nemesis and then arrange a scene of bottles around her, so when Logan awakens, she’ll believe she relapsed again? Perhaps Sheila will make Deacon look responsible, just for crossing her!