Bold And The Beautiful Plotline Predictions For The Next Two Weeks (April 13 – April 24, 2020) 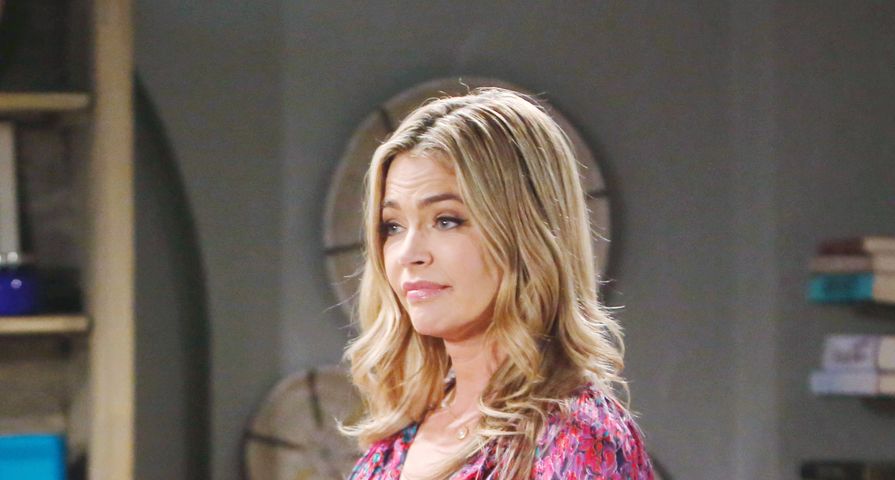 Flo suspects that Sally isn’t fatally ill and has been faking her disease all along, coming up on the Bold And The Beautiful (B&B). Also, Katie and Quinn will face-off and Eric will be conflicted about his feelings for Brooke. Plus, during a drunken blackout in Vegas, will Ridge do something he’s going to regret? Read on for 12 B&B plotline predictions for April 13 to April 24, 2020.

12. Thomas Wants To See His Son

Thomas will return to the B&B canvas in late April. He’s still hurt by the events that transpired during his ill-fated wedding to Zoe, but will he finally be over Hope? Rumor has it, he will show up at Hope and Liam’s door and will insist on seeing his son Douglas. Despite what he’s done, he’s still the boy’s father and he’ll remind Hope that he still has joint custody of his son. Will Hope let Douglas visit with Thomas?

Spoilers tease Carter will pursue Zoe in the next two weeks. When she was still with Thomas, he told her she could do much better than Thomas and now he wants to prove it to her. The Forrester attorney will ask the runway model out on a date. Zoe will be flattered and will agree to go out with him.

Some fan speculation teases that Zoe will find herself pregnant. It wasn’t long ago that Zoe was in love with Thomas and preparing to marry him. She also thought she would become a stepmother to Thomas’ son Douglas. But will she become a mother for real? If Zoe does find out she’s pregnant, what will she do about it? Other rumors indicate she’ll tell Carter about her bun in the oven and they will decide to pretend the child is his.

9. Eric And Quinn Continue To Argue

Eric and Quinn are currently at odds. She believes she did the right thing in outing Brooke and Bill’s kiss. Eric didn’t disagree with her but thought she went about it in the wrong way. “You should have gone to Ridge and Katie privately instead of humiliating them in front of everybody,” he told his wife. Eric feels as though she not only betrayed Bridge but, in a way, she betrayed him as well.

Although Eric is still unhappy with Quinn’s interference in Bridge’s marriage, he’s also disappointed in Brooke. He and Brooke will have a heart to heart conversation this week and Eric will feel conflicted. Eric’s first instinct is to support his ex-wife, but he’s also disheartened by what she did, and he’ll tell her so. It’s also rumored he’ll be forced to play referee between Brooke and Quinn when the two women get into another fierce confrontation.

B&B spoilers tease there’s a war brewing between Flo and Sally. Viewers know Flo has been supportive of Wyatt and his decision to let Sally move in with him. But the more Flo interacts with her rival, the more she suspects that not everything is as it seems. This will lead to a showdown between the two women. But who will come out on top?

6. Flo Does Some Snooping

Flo is starting to wonder if Sally is faking her fatal illness and she’ll be out to prove it. The moment she saw the sketch on Dr. Penny Escobar’s desk, she was sure something shady was going on. As she continues to dig for the truth, Flo jump at the opportunity to take a quick look through files on Penny’s laptop. She will dig for Sally’s medical records. But will she find the evidence she needs to prove Sally has been lying all along?

As Flo starts to put the pieces of Sally’s lie together, she will inform her rival that she needs to move out of Wyatt’s beach house. Sally will be taken aback but will also need to hide her true feelings for Flo. In the past, she told Flo she was grateful for letting her spend her so-called final days with Wyatt, so when Flo tells her to leave Wyatt’s house, will she be able to hold her tongue?

Bill and Katie will have a heartfelt and candid discussion about their relationship. Obviously, Katie was hurt that Bill deceived her with her sister once again. But he has explained that it was just one kiss and he is in love with her, not Brooke. Will Katie decide to forgive Bill and take him back? Or was his latest betrayal the last straw for Batie?

After threatening Quinn, Bill will insist that she apologize to Katie for hurting her by uploading the Brill kiss video. Spoilers indicate Quinn will refuse to do so and instead will end up in a confrontation with Katie. Although Katie initially thanked Quinn for exposing the kiss, she’s angry that she was humiliated in front of everyone at the Bridge reunion party. She will head to the Forrester estate to face-off with Quinn.

B&B speculation teases that Ridge will go out on the town with Shauna for a wild night in Vegas. But Brooke will find out where he is and take the Forrester jet to sin city to find him. She will then abduct her husband and fly him back to her house in Los Angeles, where he’ll wake up and have no idea how he got there.

1. What Happened In Vegas Stays In Vegas

Ridge will be desperate to know what happened in Vegas. So, after he wakes up in Los Angeles, he’ll be looking for answers. Spoilers show he will call Shauna to let her know where he is. He will also ask her about what happened the night before. Much to Ridge’s dismay, she won’t provide him with any real clarification about anything that transpired. But does Shauna know more than she’s letting on? Keep watching B&B to find out!