Bold And The Beautiful: Spoilers For October 2018 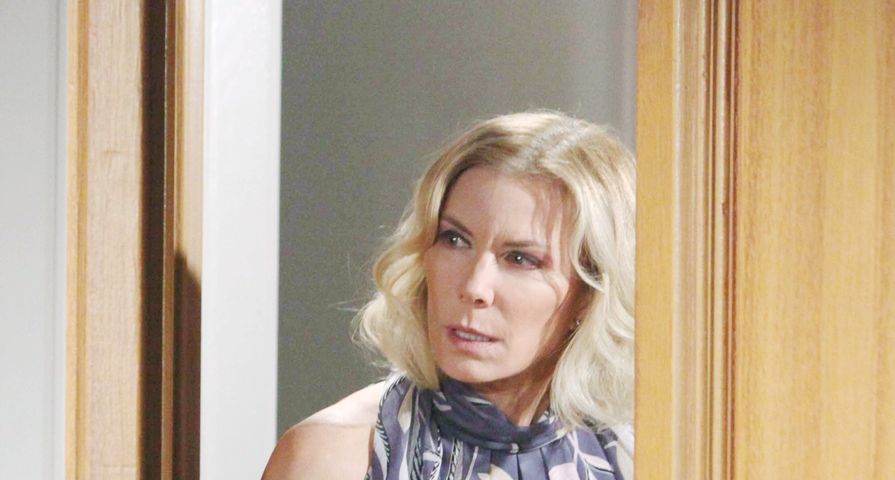 As temperatures cool down in the month of October, The Bold And The Beautiful heats up with the fallout from the custody battle for Will and a possible sabotage plot at the Intimates fashion show. Also, with the return of Donna Logan, there could be trouble in paradise for Quinn and Eric. Yet the most shocking spoiler by far is a page leaked from a B&B script that points to an altercation between Thorne, Ridge and Bill that lands Bill in the hospital, again. Read on for more B&B crazy and shocking spoilers for October 2018.

Rumor has it Hope will lean on Liam regarding her problems with Steffy at Forrester Creations. Once again, he’s going to be caught in the middle between the feuding sister wives and won’t want to choose a side. He will notice a change in Steffy’s attitude towards Hope, but being the waffler that he is, Liam will feel powerless to do anything about it.

Sally’s new lingerie designs will debut at a Forrester photo shoot and she’ll be reveling in the attention and praise. She’ll also model them for boyfriend Wyatt, who, as always, will throw his support and loyalty her way. Steffy will remain confident that hiring Sally for her line was the right decision, but will things go smoothly when Sally’s designs debut at the fashion show later in the month?

Steffy is getting her way in all things at Forrester these days so it seems only fitting that someone may try to take her down a peg. One crazy rumor is that somebody will sabotage the Intimates fashion show when it takes place in October. The list of suspects isn’t a short one either. Steffy has been sticking it to Hope since her lingerie line won out over the Hope For The Future line and Brooke has also had a number of battles with Steffy recently. But would either Hope or Brooke do something that could potentially damage Forrester? Another probable suspect is Emma, as she is very loyal to Hope and is not particularly fond of the Intimates line, especially now that Xander and his ex Zoe are both modeling for it.

9. Caught In The Act

Speaking of Emma, she finds out in October that Xander isn’t exactly the most loyal of boyfriends when she catches him making out with ex Zoe after a photo shoot. Xander can’t seem to resist his ex and it’s obvious there is a real connection there, whereas he and Emma didn’t have much chemistry to begin with. This turn of events could be good news for viewers as it may bring about an end to this fast-forward storyline.

Viewers saw Donna think back fondly on her 2008 nuptials with Eric when she recently attended Katie and Thorne’s quickie wedding. Now that Jennifer Gareis is back on contract with B&B, when she arrives in L.A. in mid-October, who will she set her sights on? Justin Barber, the father of her son Marcus, is still on the scene so it’s possible they could reconnect. But it seems more likely she will make a play for her honey bear Eric. Quinn and Eric’s marriage seems solid, but that doesn’t last long in the world of soaps and if Donna does go after Eric, we could see Quinn’s dark side come back into play in a big way.

7. Bridge On The Rocks

The state of Ridge and Brooke’s marriage is so tenuous that it may not last until Halloween. With the tension already extremely high between them due to their daughters’ battles, Brooke’s testimony on behalf of Bill at the custody hearing could blow up Bridge for good. Which, in turn, might send Brooke running into Bill’s waiting arms.

When Ridge finds out his wife and Bill have been meeting in secret, he will be furious with Brooke and the rage he develops will not subside anytime soon, but will Brooke turn to her stallion for comfort? Bill has already kissed her once (although she pushed him away) but if he does it again, will Brooke give in to temptation this time? All bets are off on this one.

In early October, Liam will invite Bill over to visit his granddaughter Kelly. Viewers are speculating that it could be because Bill loses custody of Will and Liam wants to help ease his pain and calm him down. Or maybe Liam needs to assuage his own guilt because he testified against his father. In Bill’s case, he’s trying to repair his relationship with Liam and hoping to get to know his granddaughter.

Spoilers for October indicate Katie will get full custody of Will but how long she will retain it remains to be seen. Katie has no idea Ridge has influenced Judge McMullen’s decision in the case, pressuring him to award custody to Katie, because he had lent him the money to go to law school. If Bill finds out about Ridge’s interference, there’s no doubt that all hell will break loose.

3. Judge McMullen Gets An Earful

Brooke will find out about Judge McMullen’s favor to Ridge in early October and won’t let him get away with it. She believes the judge should have recused himself from the custody case the moment Ridge asked him to rule in Katie’s favor. The big question here though is if Brooke will stay loyal to her husband and keep the news from Bill, or betray Ridge and run to Bill with the information?

After Katie wins custody of their son Will, it likely won’t be long before Bill finds out about Ridge’s influence over the judge. As spoilers show, Brooke is going to be on a warpath when she finds out what Ridge did, but it could be Justin who digs up the information. Either way, once the truth comes out, Ridge could end up in handcuffs, the judge could be disbarred, and the sole custody of Will could be up in the air again. Not to mention viewers will likely be treated a Bill blow-up of epic proportions.

The craziest and most shocking spoiler making the rounds for the month of October is that Dollar Bill will end up back in the hospital. It will be the second time in just over six months, after his long stint (as far as soaps go) this past March when Taylor shot him in the back. A leaked script making the rounds and Queen Steffy Forrester B&B Facebook page are pointing to a hospital scare that involves Wyatt, Katie, Thorne and Ridge, who are waiting on word of “Mr. Spencer’s” condition. Will Bill be in the hospital due to a physical altercation that gets out of hand with Ridge and his “second-rate wannabe” brother Thorne? Even more pertinent, no matter what happened to return him to the sick bay, will Bill survive it?