Bold And The Beautiful: Spoilers For December 2018 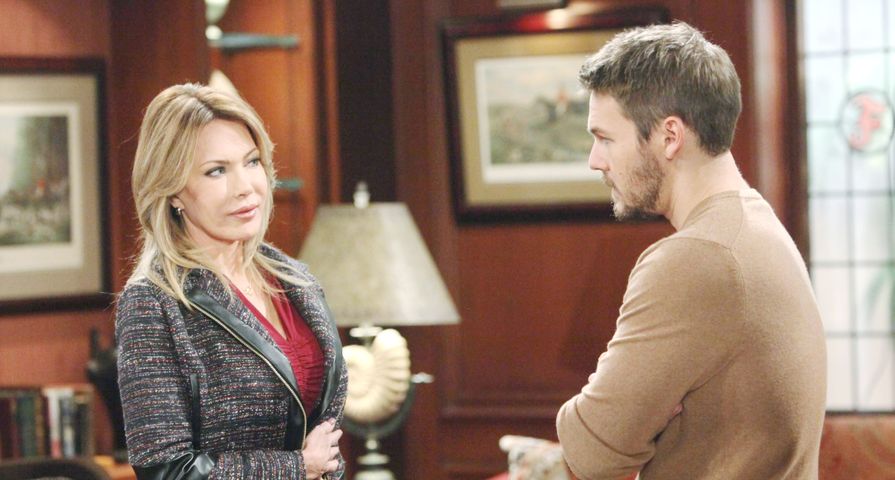 The month of December on the Bold And The Beautiful will be chock-full of conflict and chaos for some and holiday cheer for others. Taylor’s reappearance will have shocking ramifications for Steffy, Bill, Brooke, Hope and Liam. Also, Pam’s unhealthy fixation with Quinn continues, much to Donna’s chagrin, and some new and familiar faces return to the B&B canvas. Read on for more B&B crazy and shocking spoilers for December 2018.

Maya (Karla Mosley) returns to B&B mid-month. Viewers are wondering what’s in store for her character, as Jacob Young, who played her husband Rick, is no longer on contract with B&B. Various sources have recently reported, however, that with Mosley’s return to the soap, Jacob Young has expressed an interest in returning to his role as Rick Forrester. Some rumors are indicating she may be paired up with Wayne Brady, who joined the cast in late November. Regardless of Maya’s new plotline, it will be nice to have a familiar face back in the mix to shake things up. Viewers also have their fingers crossed that at some point, the writers will also bring back Maya’s parents, Julius and Vivienne.

Dr. Reese Buckingham has arrived in Los Angeles and it looks like he’ll be busy this month. Spoilers show he will meet Taylor at a Forrester staff party Steffy throws in early December and the pair are going to hit it off. As previously indicated, other spoilers are showing that he and Maya may become a couple. One thing is certain – he apparently doesn’t like his daughter Zoe modeling lingerie for the Intimates line. A grown woman, Zoe is not going to be happy about him moving to L.A. and trying to interfere in her life and her career choices.

Donna will become increasingly concerned with Pam’s obsession that she belongs with Eric. She will admit to Pam that she still cares deeply for Eric, but she’s not sure why Pam is so set on reuniting them. She begins to worry that Pam’s dark side is reemerging. And if anyone knows Pam’s dark side, it’s Donna. It wasn’t all that long ago that Pam was covering Donna in honey and luring a bear into the Big Bear cabin to maul her!

Pam, meanwhile, refuses to leave well enough alone and will insist to Donna that with some persistence, she can win back Eric’s heart and kick Quinn to the curb at the same time. She will manipulate Quinn to distract her, so Eric and Donna can spend some quality time alone together. Pam is convinced that once Eric remembers how much he once loved Donna, he won’t be able to resist his ex-wife.

Eric will host his usual holiday party at the Forrester estate, playing piano and singing carols, with his whole family, including wife Quinn, by his side. Also expected to be in attendance are Donna and Pam, and the latter will try to push Donna and Eric together every chance she gets. This will amuse Eric but infuriate Quinn.

Ridge and Taylor will continue to reconnect over their hatred of Dollar Bill Spencer this month. Both blame Bill for the collapse of their daughter Steffy’s marriage to Liam. “I hate Spencer…I hate him with every breath I take,” Ridge told Taylor recently. “I’m not the person that wants someone else dead but…whoever shot him, I just think our lives would be a lot simpler if Spencer weren’t around.” If Ridge finds out Taylor was the one who shot Bill, it seems safe to assume he will throw a parade in her honor. And after all, it was only weeks ago that Ridge pushed Bill over his balcony, sending him straight to the ICU.

Liam has already expressed his concerns to Steffy about her mother being around their daughter, and this was before he walked in on her yelling at his pregnant wife! In December, he will articulate his growing fears about his former mother-in-law to Bill. His father will hear him out but insist that Taylor is not a threat to Kelly. Despite this, Steam will continue to argue throughout the month about Taylor’s issues and her being around their daughter.

Bill and Steffy will try to work together to convince Liam that Taylor does not pose a danger to baby Kelly and there’s no reason to limit the time her grandmother gets to spend with her. Steffy will try to persuade Liam that her mother values Kelly and Bill will reiterate to his son that the only person Taylor is a threat to is him. But are they right?

Brooke will find out from Hope that Taylor is the one who shot Bill. She will be in complete shock, but what will she do with this damning information? One of her first stops will be Spencer Publications. Brooke cannot believe her Stallion has not turned Taylor in for her crime. Bill will remind her he’s a changed man and has forgiven Taylor. But now that she knows the truth herself, will she be the one to contact the police?

The cracks are spreading in the Bridge relationship and it looks like there’s no repair job in sight. Once Brooke learns about Taylor’s verbal attack on Hope, she’ll be sure that Ridge will condemn his ex-wife and show sympathy for her daughter Hope. Instead, he’ll defend Taylor and tell Brooke that she must have had a reason for her actions. Brooke and Ridge will continue to argue throughout the month of December, with Brooke asking her husband to stay away from Taylor and Ridge asking his wife to stay away from Bill.

According to Soaps.com, B&B is looking to cast seven-pound identical twin or triplet Caucasian babies, who would resemble a preemie. It’s likely these infants will appear as Hope and Liam’s newborn daughter. Rumor has it, Taylor will be once again be ranting and raving to Hope about how she ruined Steffy’s life and stole Liam from her. But this time, Taylor’s attack on Hope could cause her to go into premature labor this month. Liam has been on edge and worried about what an unhinged Taylor is capable of and Hope’s premature labor may be the culmination of his worst fears coming true.

There are many rumors indicating the Lope Baby will be born sometime in December. But, as stated in the spoiler above, it looks like the child could be born prematurely and there will be concerns about her health and whether Hope and the baby will survive. Viewers can expect some nerve-wracking and highly emotional moments for Liam as both Hope and the baby are in danger, likely because of Taylor. But will the month of December end with heartbreak for Liam and Hope, or a holiday miracle?