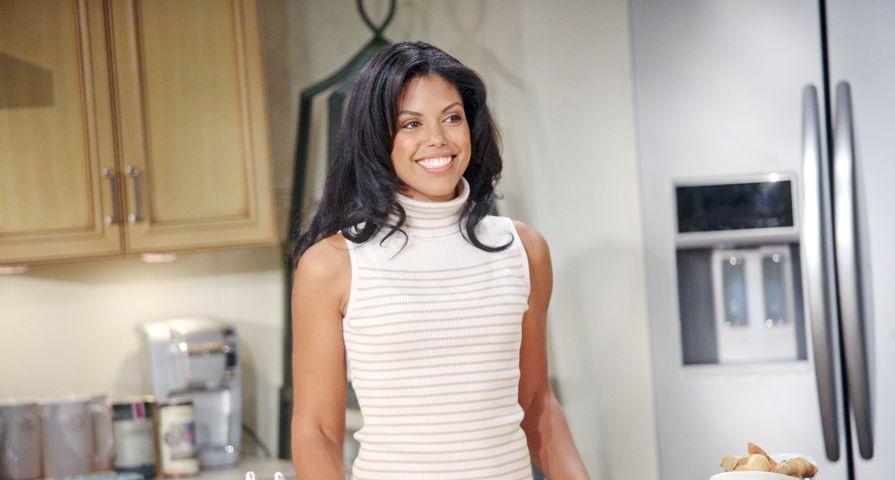 Exhilarating characters can add a rousing energy to a soap and can stir up strong emotions from viewers. Who can forget Dollar Bill’s wise-cracking, take no prisoners’ attitude or Rick running Forrester Creations like a tyrant? But unfortunately, some characters progress through a metamorphosis and go from electrifying to monotonous. The following are 12 B&B characters who went from exciting to boring.

Amber always had a trick up her sleeve, which made her a stimulating character to watch. When she first appeared in LA, she was teenaged Rick’s babysitter and within months she had seduced him. Amber and Rick were eventually married, and she cheated on him and got pregnant. But when her child was stillborn, she swapped babies with her cousin and then passed the child off as her own. A few years later, she found herself pregnant again and trapped Liam into believing the child was his. Once everyone discovered the father was Marcus, Amber once again pursued Rick, which viewers found tiresome.

Ridge was an exciting and infamous playboy who got himself into loads of trouble with the ladies. He romanced and won over Caroline (junior and senior), Taylor, Katie, Ashley, Quinn, and of course Brooke, among others. These days, he’s become a boring, gullible fool who can easily be tricked into believing he married someone, even when he can’t remember the ceremony.

Thomas was so off the hook obsessed with Hope, viewers couldn’t predict what he’d try to do next to win her over. Not only did he keep a massive secret from her, that her daughter was still alive, but he also ran Emma off the road, tricked Hope into marrying him, and made Zoe believe he loved her. These days, Thomas’ whole mind-numbing world consists of checking in on his sister Steffy.

During her approximately 29-year run on the B&B, Taylor caused Darla’s demise when she was driving drunk, inadvertently gave birth to her rival Brooke’s child, and shot Bill in the back. She also slept with many inappropriate men and her mental state began to decline. But during the last year she was around, she became a complete bore and departed the B&B canvas with little fanfare.

Brooke’s younger sister Donna went through as many Forrester men as her sister. She pursued Thorne and married him, much to Stephanie’s horror. When that relationship failed, she went after Ridge, but that turned out to be a futile pursuit. Then Donna set her sights on Eric, who was married to Stephanie at the time. She pursued him relentlessly and he ended up leaving Stephanie and marrying her. But their marriage ended, and Donna disappeared. Since she returned in 2018, Donna’s character has been lackluster. All she’s done is act as a sounding board for Brooke and Katie. But with Quinn and Eric’s marriage standing on the edge of a knife, will Donna go after her Honey Bear once more?

The Forrester family’s Australian cousin arrived on the scene like an invigorating breath of fresh air. But unfortunately, like many other female characters on B&B before her, she fell for Liam and it led to Ivy’s doom. She ended up spending all her time pining after and pursuing The Waffler. She even started taking advice from Quinn and changed her accent from Australian to American, so she would sound more like Steffy.

When Eric handed over the reins of Forrester Creations to junior, he had no idea he’d created a monster. The power went to his head, and Rick ran the company like a tyrant, belittling everyone who didn’t toe the line. He also shot at Caroline and Ridge and cheated on Caroline with Maya. Once he and Maya got married, however, Rick went from exciting to boring and the character eventually disappeared from the sudser in 2018.

Maya assisted Rick in his reign of terror over everyone at Forrester Creations. But what no one knew was that she was hiding a secret. When her sister Nicole came to town, it was revealed that Maya was transgender. This was exciting for fans because she was the first regular transgender on a North American soap opera. But as she and Rick settled down and had a family together, Maya went from a moving character to dull in the space of about a year.

When Wyatt first showed up in LA, he was a mysterious new man, with an equally mysterious jewelry designer mother. Viewers soon learned he was Dollar Bill’s son and Liam’s brother. He competed with Liam for women, including Hope and Steffy, and even had a scandalous relationship with his father’s ex Katie. Fans continued to see the character as exciting when he got together with Sally. But since he’s been with Flo, all he’s done is stare at her with his puppy dog eyes. It’s become tedious and tiresome and viewers long for the energized Wyatt, not the lackluster version he’s become when he’s with Flo.

Sheila was an exciting villain whom viewers loved to hate. She altered the results of a paternity test, tried to cause Stephanie’s demise several times, she shot Taylor, kidnapped James and then held him prisoner in the basement of her house. But when she returned to the B&B canvas in 2017, the character had become a snooze. Sure, she tried to cause some problems in Eric and Quinn’s marriage. But she didn’t do much else besides listen in on people at Il Giardino and disappeared less than a year later.

Quinn arrived in LA in 2013, and it didn’t take long for fans to figure out that, much like Sheila, she was a full-blown nutjob. During her tenure, she has pushed Ivy off a bridge, threatened Liam with a sword, kidnapped Liam and held him hostage for months. But after she married Eric, fans felt like she had been neutered. Quinn became a good little wife and didn’t do anything out of the ordinary for at least a year. But she’s been up to no good lately and did everything she could to unite her bestie Shauna with Ridge, and she just got busted for it. New, humdrum Quinn is about to be traded in for old, instigator Quinn and viewers couldn’t be happier.

Speaking of being neutered, many fans do not appreciate Bill’s changed man status. Dollar Bill used to be an electrifying force to be reckoned with in LA. His one-liners and well-timed, sarcastic quips about others made him a popular character. His outrageous actions, like trying to do away with Amber and blowing up a building with Liam inside it, have thrilled fans. But after he fell off his balcony during a fight with The Dressmaker in 2018, he woke up proclaiming he was going to be a better man. This was the moment he went from exhilarating to dreary. However, there may be hope for Bill yet. He recently told Quinn if she continued to involve him in her schemes, he would “end” her. Have viewers seen the last of the old Dollar Bill or will he make a triumphant return? Keep watching B&B to find out!