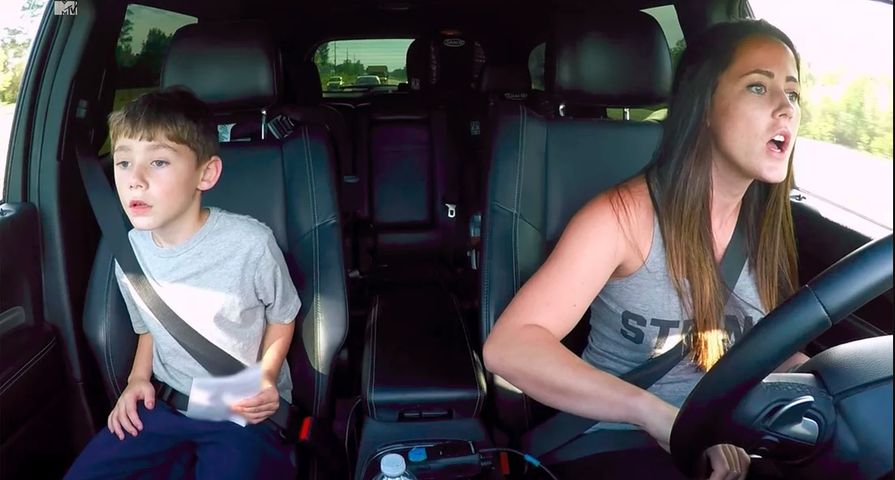 Those who follow Teen Mom 2, and even those who don’t, know that the drama both on and off-camera can get very intense, but the Monday, July 23 episode was one of the craziest.

The new episode, depicted a terrifying road rage incident involving star Jenelle Evans and her son Jace,  which was reported on back in May when the season was filming.

Int he episode, Jenelle and her 8-year-old son are driving back from a therapy session when a driver in a white pickup truck tailgated them and then drove around the, cut them off and slammed on his brakes, causing Evans to slam on her own brakes to avoid a crash.

“Are you f—— kidding me, dude? Oh my God. Give me your phone,” Evans told Jace. She dialed 911 and told them she “almost veered out of the road” after the other driver abruptly slowed.

Jenelle then chose to follow the driver of the truck to his home where she leaned forward and pulled out a small handgun in front of her young son.

“If he tries to get out and hurt you, I can get out this nerf gun and whip him,” Jace told his mother.

Jenelle then called her husband, David Eason, to tell him what was happening and she told him she followed the driver home.

“I got three cameras in my car, they got the whole thing,” she yelled at the driver. “I just called the law on you, you were tailgating me, you dumba—.”

As she tried to leave the property, she hit the man’s mailbox causing him to get back into his vehicle and block Jenelle’s car from leaving. “Dude, he just hit my car! Babe, he just hit my f—— car!” she yelled at Eason who was still on speakerphone as she attempted to drive off.

After leaving the property, Jenelle told David that the other driver was now following her. “Well, don’t f—— god damn follow him!” Eason yelled at her through the speakerphone. “You call the police, you don’t follow people.” Jenelle then called her producer, and at the same time a cruiser pulled her over because she had called the cops.

As Jenelle talked to the police, Jace sat in the car alone and called his grandmother Barbara to let her know what had happened. “He slammed into us,” Jace said. “And then mommy just points a gun at the guy and then he said ‘you better not f–king shoot.’”

Back in May when she made the report, Evans said the whole thing was instigated by the other driver who she said raced “in front of me and purposely slammed on the brakes at 70-something miles an hour. This guy is trying his hardest for me not to be behind him anymore. He is literally going crazy, swerving in and out of lanes.”

In the end, neither driver was charged.