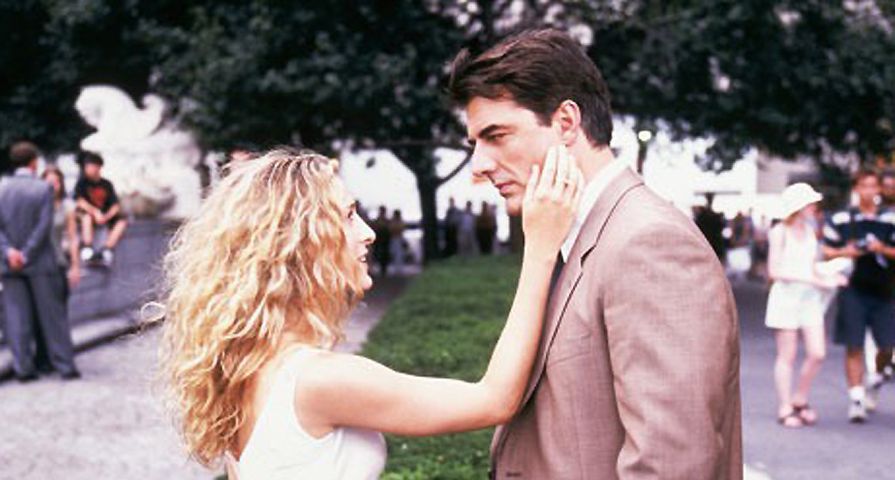 Sex and the City was one of the best series on television during the late ’90s and early 2000s. The HBO romantic comedy followed the personal and professional lives of four New York City women in their thirties. Much of the focus was around their relationships, mainly Carrie and Mr. Big’s. Throughout the entire six-season run, these two were off and on, then off and on, but one thing always remained the same — they were perfect for each other! Viewers were split into two groups: team Aiden and team Big, even though Aiden would have been the smart choice, it was clear Carrie was destined to be with Big. Even through the ups and downs, these two always found their way back to one another and have now become one of television’s most iconic couples. Here’s a look at the best 8 moments between Carrie and Big on Sex and the City!

Once upon a time, Carrie met Mr. Big when she initially bumped into him on the street and he stopped to help her pick up the contents of her purse aka cosmetics and condoms. They played a bit of cat and mouse in the beginning as they continuously bumped into each other, but she really started to fall for the idea of Mr. Big when he came to visit her at a coffee shop and said, “After a while, you just want to be with the one that makes you laugh.” After a few failed attempts, they have their first ‘big’ date in episode 6. By that point, there had been such a build up between the two of them that they ended up sleeping together before they even make it to dinner! Afterwards, instead of going to a fancy restaurant, they go to a small Chinese restaurant and have the most perfectly imperfect first date!

In the episode “The Big Journey” in season 5, Carrie and Samantha travel to San Francisco on Carrie’s book tour. The main reason Carrie wants to go is so that she can have a friendly rendezvous with Big, but things don’t go as smooth as she would have hoped. Carrie and Samantha take the train from New York to San Francisco which ends up being a disaster! Their deluxe suite is no bigger than a sardine can and then the trip goes from bad to worse when Carrie shows up to her reading only to find out she’s the opening act and everyone is there to see Mr. Winkle. Fortunately, things turn around unexpectedly when she gets a question from the audience from a man who she can’t see. Finally she asks him to stand up and the mysterious man turns out to be Mr. Big! It didn’t matter that the rest of the audience wasn’t there to see her because he was. He surprised her by showing up at her book reading and the two make plans to have dinner later that night.

During season 2, in the episode “The Man, The Myth, The Viagra” Big takes Carrie out on a romantic date to a restaurant he clearly frequents and introduces her as his girlfriend for the first time ever. It’s a special moment between the two because viewers, and even Carrie herself, have never heard Big refer to her as his girlfriend. He even serenades her! Throughout this episode, the women, mainly Miranda are skeptical about the rekindled relationship between Carrie and Big. Miranda is adamant that people don’t change and their relationship will go back to exactly what it was before. This theory is tested when Carrie invites Big to meet the girls for drinks. In typical Big fashion, he bails right before they are about to leave. She starts to doubt their relationship, but right before she’s about the break the news to them that he’s not coming after putting it off, he surprises her by showing up which once again proves that their relationship truly is different this time around.

This episode is bitter sweet. Carrie finally realizes and accepts that she has to let Big go. After a long few months of complaining about his new found relationship with Natasha (“the idiot stick figure”) who he’s about to marry, Carrie comes to terms with the fact that “they are happy/we’re over.” The day of their engagement brunch, Carrie goes for drinks with the girls in order to forget about the party happening no that far away at the Plaza. It was during this lunch that she compares her relationship with Big to the film, The Way We Were. This causes her to draw the conclusion that she’s like the main character, Katie — she’s just too wild and free spirited and Big needs a woman who is much more plain, like Natasha. She walks over when she knows the party is long over and sees Big and Natasha just as they are leaving. He comes over to greet her and tell her she’s missed the party, and she replies with “Your girl is lovely, Hubbell.” Big then said, “I don’t get it?” and she replied with, “And you never did.” It’s hands down one of the best scenes in the entire series!

4. Falling in the Lake

Despite all of the bad in their relationship, at the end of the day, they both know how to make each other laugh. They both share the same sense of humor and are able to accomplish what most couples can’t which is to maintain a friendship after a break-up. At the end of season 3 when they’ve both been left single post-affair, Carrie and Big make plans to meet for a ‘friendly’ lunch. Miranda warns Carrie that if she must go meet with Big, she has to make sure she doesn’t let him kiss her because that’s where all their problems seem to start. Carrie and Big meet at a restaurant near the water. They greet each other while standing on the dock, but when Big leans in to give Carrie a kiss on the cheek, she freaks out and pulls away! Both Carrie and Big lose their footing and fall in the lake! Once Big makes sure Carrie is okay, they both end up in a fit of laughter. It was the one of the funniest and sweetest moments on the show.

3. Last Night on the Town

It was so sad when, in the season 4 episode “I Heart NY,” Carrie found out that Big was moving to Napa. Carrie had gone over to Big’s because she was lonely and couldn’t sleep, so the two of them hung out, ate pizza and listened to some old records. They started dancing to the song “Moon River and Me,” but as soon as they were about the kiss the record started to skip ruining the moment. She told him that he couldn’t leave without one last romantic night on the town, so she planned a date for the two of them. It was her definition of the perfect New York night: dinner, dancing and a horse and buggy ride through Central Park. Unfortunately their date was cut short because Miranda went into labor, but when she came back the next day to say goodbye, it was too late. He did leave her the record they danced to the other night with a Post-It that said, “If you ever get lonely,” and another envelope with a plane ticket to Napa that said, “If I ever get lonely.” It was perfect!

Every couple comes to that point in their relationship when the comfort level reaches a whole new level. There are many different ways that this comes to be, but when it happened to Big and Carrie, it was in the funniest way possible! It was back in season 1 in an episode called “The Drought.” Big and Carrie were laying in bed when she accidentally passes gas! She’s totally mortified which is understandable because they haven’t been together that long, but Big laughs it off and not surprisingly teases her about it by sneaking a whoopie cushion onto her chair during dinner the following night. Despite being totally paranoid about the whole situation and feeling like she’s not sexy to him anymore, she can’t help but find it funny as well and, thankfully, Big makes light of the whole situation. This episode is one of the best between Carrie and Big because it showcases a milestone in their relationship. They go from just dating and being in the ‘honeymoon stage’ to being a legitimate couple as Carrie realizes that it’s gonna take a lot more than a little gas to scare Big away!

The series finale of Sex and the City was one of the best episodes ever and most definitely one of the most memorable moments between Carrie and Big. It was so satisfying for fans who had watched the show for all six seasons to finally see Big work up the courage to commit to a relationship with Carrie. The moment was made all the more special by the fact that Big was literally her knight in shining armor with impeccable timing when he swept in to rescue her after her big fight with Aleksandr Petrovsky. It was so cute when Big tried to play the ‘protective boyfriend’ role and confront Petrovsky about slapping Carrie, but she chased after him and tripped him in order to get him to stop! Later they are out walking around Paris in a totally romantic setting and Carrie is still totally in shock that Big found her halfway across the world. He then said what she’d been waiting to hear for the past 6 years — “You’re the one, Carrie.” Cue the water works!