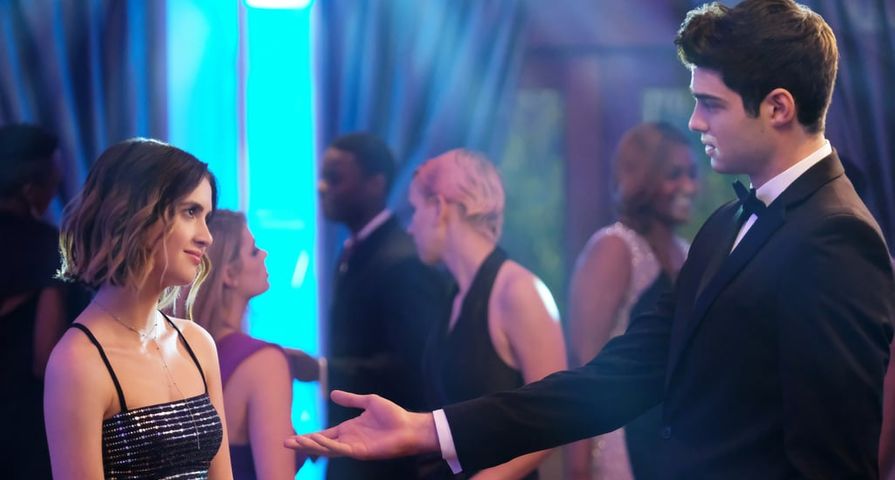 Every month Netflix takes away some favorites, but also adds some new binge-worthy material, and April 2019 is seeing quite a few exciting additions to the lineup. From comedy to action and new Netflix Original Series there will be a little something for everyone with one of the most anticipated being The Perfect Date starring everyone’s new favorite on-screen boyfriend Noah Centineo and Riverdale‘s Camila Mendes. Fans also have to say goodbye to some favorites including Billy Madison and Sex and the City: The Movie. Check out everything is coming to and leaving Netflix this April 2019:

There are a lot of new additions coming to Netflix the first of the month including sci-fi classic The Fifth Element and both Sisterhood of the Traveling Pants films! Everything that will be available April 1 is: Across the Line, All the President’s Men, Bonnie and Clyde (1967), Deliverance, Divine Secrets of the Ya-Ya Sisterhood, Evolution, Freddy vs. Jason (2009), I Am Legend, Lakeview Terrace, Monster House, Obsessed, Penelope, Pineapple Express, Pokemon the Series: Sun & Moon (Season 2), P.S. I Love You, Snatch, Spy Kids, Texas Chainsaw Massacre 3D, The Bone Collector, The Fifth Element, The Golden Compass, The Sisterhood of the Traveling Pants 1 & 2, and Valkyrie.

The only thing new coming April 2 to Netflix is the Netflix Original Stand-Up Special, Kevin Hart: Irresponsible. Synopsis: As a father of three on his second marriage, Kevin Hart proves that being him is indeed a tall order in a fresh special inspired by his own mistakes.

Suzzanna: Buried Alive is being added to the International Moves roster on Netflix from director Rocky Soraya and starring Luna Maya, Herjunot Ali, Teuku Rifnu Wikana. Synopsis: After a pregnant woman is murdered, her spirit seeks revenge against her increasingly terrified killers, who are determined to finish her off for good.

Season 7 of New Girl lands at Netflix April 10 as well as a brand new Netflix Original Interactive Series. You Vs Wild (Season 1) stars Bear Grylls and “In this interactive series, you’ll make key decisions to help Bear Grylls survive, thrive and complete missions in the harshest environments on Earth.”

The Netflix Original Series Black Summer stars Jaime King, Justin Chu Cary, Christine Lee and will serve as a precursor to Z Nation. A synopsis for the horror-action drama reads: In the dark, early days of a zombie apocalypse, complete strangers band together to find the strength they need to survive and get back to loved ones.

Noah Centineo and Camila Mendes’ The Perfect Date launches on April 12! Centineo stars as a high schooler who launches an app offering his services as a fake date in order to make money for college. But when real feelings emerge, things get complicated.

Also coming on April 12: A Land Imagines, Francesco De Carlo: Cose di questo mondo, Huge in France, Mighty Little Bheem, The Silence, and Who Would You Take to a Deserted Island?

Luis Migel – The Series (Season 1) Synopsis: This series dramatizes the life story of Mexican superstar singer Luis Miguel, who has captivated audiences in Latin America and beyond for decades.

Super Monsters Furever Friends – Netflix Original Kids Series. Synopsis: On the first night of spring, the Super Monsters gather for food, fun and games in the park — and get to meet their adorable new pets!

My First First Love (Season 1) Netflix Original Series (Korean TV Shows). Synopsis: Due to various personal reasons, a group of Yun Tae-o’s friends move into his house where they experience love, friendship, and everything in between.

A Fortunate Man – Netflix Original Movie. Synopsis: A gifted engineer flees his austere roots to pursue wealth and success among Copenhagen’s elite, but the pride propelling him threatens to be his ruin.

Music Teacher – Netflix Original Movie. Synopsis: A dejected small-town music teacher grapples with guilt and regret when his ex-pupil who once loved him returns home as the star he always wanted to be.

Someone Great – Netflix Original Movie. Synopsis: On the heels of a blindsiding breakup, music journalist Jenny braces for a new beginning — and one last adventure with her closest friends. Starring: Gina Rodriguez, Brittany Snow, DeWanda Wise.

Pinky Malinky (Part 2) – Netflix Original Series. Synopsis: Pinky Malinky sees the bright side of everything, including being born a hot dog. With his BFFs in tow, this little wiener takes a bite out of life.

Selection Day (Part 2) – Netflix Original Hindi Series. Synopsis: Two teen cricket prodigies struggle against their overbearing father and a system stacked against them to realize their own ambitions and identities.

I Think You Should Leave with Tim Robinson – Netflix Original. Synopsis: In this new sketch show, Tim Robinson and guests spend each segment driving someone to the point of needing — or desperately wanting — to leave. Starring: Tim Robinson, Andy Samberg, and Sam Richardson.

Bonding – Netflix Original. Synopsis: Bonding centers on the relationship between former high-school BFFs, Pete, a recently out gay man, and Tiff, a grad student and secretly one of New York City’s top dominatrixes, who reconnect in an unexpected way years later. The dark comedy is loosely based on the life experiences of Rightor Doyle (Barry, You’re the Worst, Nerve), who serves as writer, director, showrunner, and executive producer.

The Hateful Eight: Extended Version – 2015 Film. Synopsis: Years after the Civil War, a bounty hunter and his captive are waylaid by a Wyoming blizzard and hole up in a way station with six dicey strangers. Starring: Samuel L. Jackson, Kurt Russell, Jennifer Jason Leigh.

The Ugly Truth – 2009 Film. Synopsis: A chauvinistic morning-show commentator tries to prove the relationship theories he espouses on a segment called “The Ugly Truth.” Starring: Katherine Heigl and Gerard Butler.

Otherhood – Netflix Original Movie. Synopsis: Comedy about three moms who leave their suburban life to reconnect with their estranged sons in NYC.

ReMastered: Devil at the Crossroads – Netflix Original Series. Synopsis: Robert Johnson was one of the most influential blues guitarists ever. Even before his early death, fans wondered if he’d made a pact with the Devil.

Yankee (Season 1) – Netflix Original Series. Synopsis: On the run from the police, an Arizona man crosses into Mexico and gets deeply involved in drug trafficking with the help of modern technology.

Street Food (Season 1) – Netflix Original Series. Synopsis: Embark on a global cultural journey into street food and discover the stories of the people who create the dishes. From the makers of “Chef’s Table.”

Señora Acero (Season 5). Synopsis: The fifth and final season of the American television series Señora Acero, also known as Señora Acero: La Coyote, follow the life of Vicenta Acero, 6 years after the death of her husband Daniel Philips and her new future as a mother.

Burning – 2018 Film. Synopsis: After Poetry, it makes sense that Lee Chang-dong would find himself interested in deconstructing another literary genre: the murder mystery. Adapting Haruki Murakami’s short story “Barn Burning” for the screen, the South Korean master has created something that feels akin to a real page turner, with each cut, the tensions, and the mystery rise as we become desperate to know whatever happened to Shin Hae-mi (Jeon Jong-seo), the young woman who went missing, leaving her childhood friend Lee Jong-su (Yoo Ah-in) searching for her.

Be prepared to say goodbye to a lot as of April 1 on Netflix. Everything leaving: American Pie, Billy Madison, Blue Mountain Sate: Seasons 1-3, Casino Royale, Diamonds are Forever, Die Another Day, Don’t Be A Menace to South Central While Drinking Your Juice in the Hood, Goldfinger, Happy Feet, Happy Gilmore, Heat, I Love You, Man, L.A. Confidential, Live and Let Die, Luterh: Series 1-4, Octopussy, Pokemon: XY; Season 1-2. Seven, Sex and the City: The Movie, The Living Daylights, The Man With the Golden Gun, The Spy Who Loved Me, The World Is Not Enough, Wallander: Series 1-4, You Only Live Twice, and Raw (April 4).