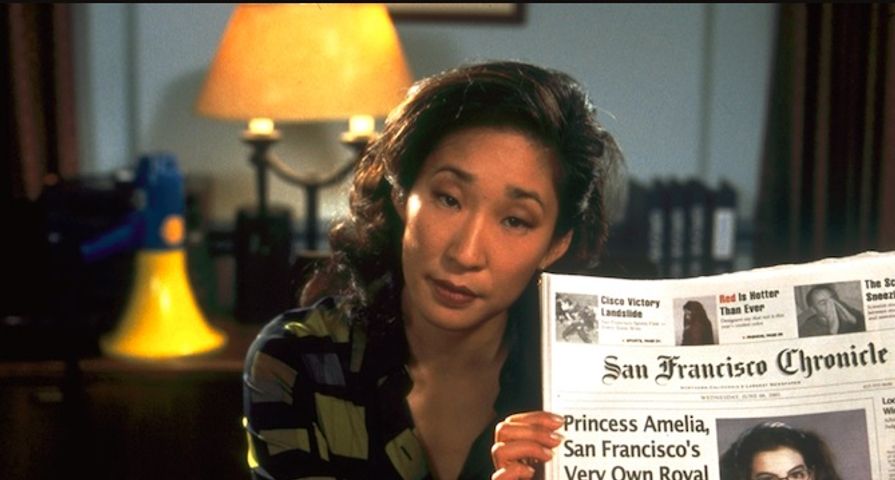 The high school movie genre has been heavily saturated over the years, but a golden time for these teen films was definitely the ’90s and early 2000s. Movies such as 10 Things I Hate About You, She’s All That, and Save the Last Dance are still fan favorites and as they are re-watched again and again, many have noticed familiar faces in the background. Every big star had to start somewhere and many of them began by taking smaller roles in very popular teen films! Here are 12 stars you probably forgot were in some of the most popular high school flicks of the ’90s and 2000s:

Before Buffy the Vampire Slayer was one of the most popular teen series to ever hit television, but years before it hit the small screen, it was turned into a film. The Buffy the Vampire Slayer movie was released in 1992 and starred Kristy Swanson as Buffy, a Valley girl cheerleader turned vampire hunter. Along with Swanson the film boasted stars such as Donald Sutherland, Luke Perry and David Arquette, but in the background of the cast is one of today’s biggest stars — Ben Affleck. Affleck portrayed a member of the basketball team and is simply listed as “Basketball Player #10.” It was such a small role it is easy to overlook, and there was no telling he would go on to become one of Hollywood’s most well-known stars.

11. Milo Ventimiglia – She’s All That

If Ben Affleck’s role in Buffy the Vampire Slayer was small then Milo Ventimiglia’s part in She’s All That is a “blink and you’ll miss it” type of role. The charming actor went through many small parts before he really gained recognition after landing the role of Jess Mariano on Gilmore Girls from 2001-2006, and has gone to even more fame as Peter Petrelli on Heroes and now Jack Pearson on TV’s biggest new drama This Is Us. Before it all, he appeared in his very first movie role with 1999’s She’s All That and can be seen as the last junior varsity soccer players to enter the house that Zack enlists to clean��so that he can take Laney out.

James Franco has never shied away from a role, and has done everything from teen series (Freaks and Geeks) to soap operas (General Hospital) and is now one of the funniest men in the industry with his numerous leading roles, but his very first movie role was in 1999’s Never Been Kissed. Franco appeared in the beloved Drew Barrymore led film as Jason, the best friend of the lead teen male character Guy Perkins played by Jeremy Jordan. Now, Jeremy Jordan might be a long-forgotten name but everyone knows who James Franco is!

Mandy Moore hit Hollywood big as a young age with a double career as not only a pop star but an actress, and she is known for her many teen films including How to Deal, Try Seventeen, Saved!, and of course A Walk to Remember. With all of those under her belt, many fans forget about one of her first acting roles in one of the 2000s most popular teen films, 2001’s The Princess Diaries. Moore appeared as the school’s resident “mean girl” Lana and even performed her song “Stupid Cupid” in the movie. In the years since Moore has had many other roles both in films and on TV, but there is no doubt she is seeing a resurgence of success as Rebecca Pearson on the hit show This Is Us.

8. Jared Padalecki – Cheaper By the Dozen

2003’s Cheaper by the Dozen can be identified as a family film, but a lot of the focus was on the film’s young stars which included Tom Welling, Hilary Duff, and Alyson Stoner. Out of the talented star-studded cast, one star gets easily forgotten about because of his small part in the movie, but looking back the high school bully is none other than beloved Supernatural actor Jared Padalecki. The part was only Padalecki’s seventh role but his biggest as he previously had only appeared in four TV movies, an episode of ER and the 1999 film A Little Inside.

To many, Anna Paquin’s breakout role was as Rogue in the very first X-Men film, but only one year prior she had a supporting role in the beloved 1999 film She’s All That. Paquin starred as Mackenzie Siler, the younger sister to Freddie Prinze Jr.’s Zack Siler. Considering she strayed far from the typical teen genre with her role in the X-Men franchise and starred in the successful HBO series True Blood, it is easy to forget she is the same actress in She’s All That, but if you have watched the movie hundreds of times like many fans have, you’ve probably recognized her by now.

James Franco isn’t the only popular Hollywood star to have a supporting role in Never Been Kissed. After her run as a young actress on shows such as The Secret World of Alex Mack and Flipper, Jessica Alba made her major film debut in the 1999 film as Kirsten, the most popular girl at South Glen South High School. Shortly after the role, Alba landed what is considered her breakout role in the series Dark Angel and before long her time in Never Been Kissed was long forgotten as she forged ahead in her career.

4. Kerry Washington – Save the Last Dance

Kerry Washington is incredible in every role that she takes on, and since starring in the highly successful Shonda Rhimes show Scandal, all eyes have been on her in the industry. If you rewind her career, fans will see Washington as one of the stars of the beloved 2001 film Save the Last Dance. Save the Last Dance began a genre all its own of musical/dance films in correlation with high school movies, and while it starred Julia Stiles and Sean Patrick Thomas, Kerry Washington also stars as Chenille. The part was only the fifth on-screen role for the actress.

2004’s A Cinderella Story is a wonderfully cheesy take on the classic Cinderella fairy tale that stars Hilary Duff and Chad Michael Murray, but there is another major star in there you may not have noticed before. Popular The Big Bang Theory actor Simon Helberg appeared in A Cinderella Story as Terry, a “nerd” questing for Sam’s affections. Looking back at his role in the film, his Big Bang Theory character of Howard Wolowitz simply seems like an extension of his portrayal of the Matrix-loving Terry.

Given the incredible success of the Fast and the Furious franchise, it isn’t surprising that when fans think back on the late Paul Walker’s career he is remembered as Brian O’Conner. While it was most certainly his most popular role, Walker had quite the career before then which featured supporting roles in teen films like She’s All That and Varsity Blues. Walker was the friend-turned-nemesis Dean to Freddie Prinze Jr.’s Zack in She’s All That, the sweet innocent Skip Martin in Pleasantville, and the injured quarterback Lance Harbor in Varsity Blues!

Sandra Oh has had numerous roles, both big and small, over the course of her career but thanks to her show-stealing time as Cristina Yang on Grey’s Anatomy, most of her other roles get forgotten. Since so many of her roles before Grey’s get overlooked it is easy to forget that she appeared in 2001’s The Princess Diaries! Oh starred as Vice Principal Gupta in the adored film, which starred Anne Hathway and Julie Andrews.