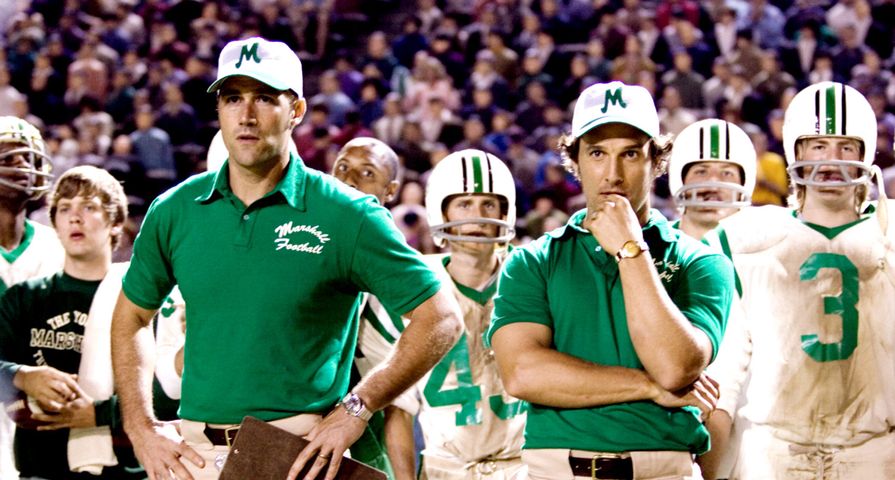 Who doesn’t love a great football flick? Even the least of football fans can be swept away in the drama that blossoms from the blood, sweat and tears of the gridiron. Regarding most football films, there is even some exceptionally well written — or tacked on — romance, which makes most of them wonderful for date night. Right fellas? Giving consideration to the actual film, story and mass appeal (honorable mentions to films such as Knute Rockne All American and Paper Lion), here are our some of the best movies built around football.

Adam Sandler’s The Waterboy is regarded as a favorite among Sandler fans. The 1998 film starred the comedian as Bobby Boucher Jr., a young, socially inept man, with a passion for water and providing the best of it to the University of Louisiana football team. After an incident with the team, Boucher is hired by the South Central Louisiana State University Mud Dogs where it is discovered that when angry, Boucher is a very aggressive and effective football player. The Waterboy is beloved as one of the few sports comedies amid the very serious dramas. 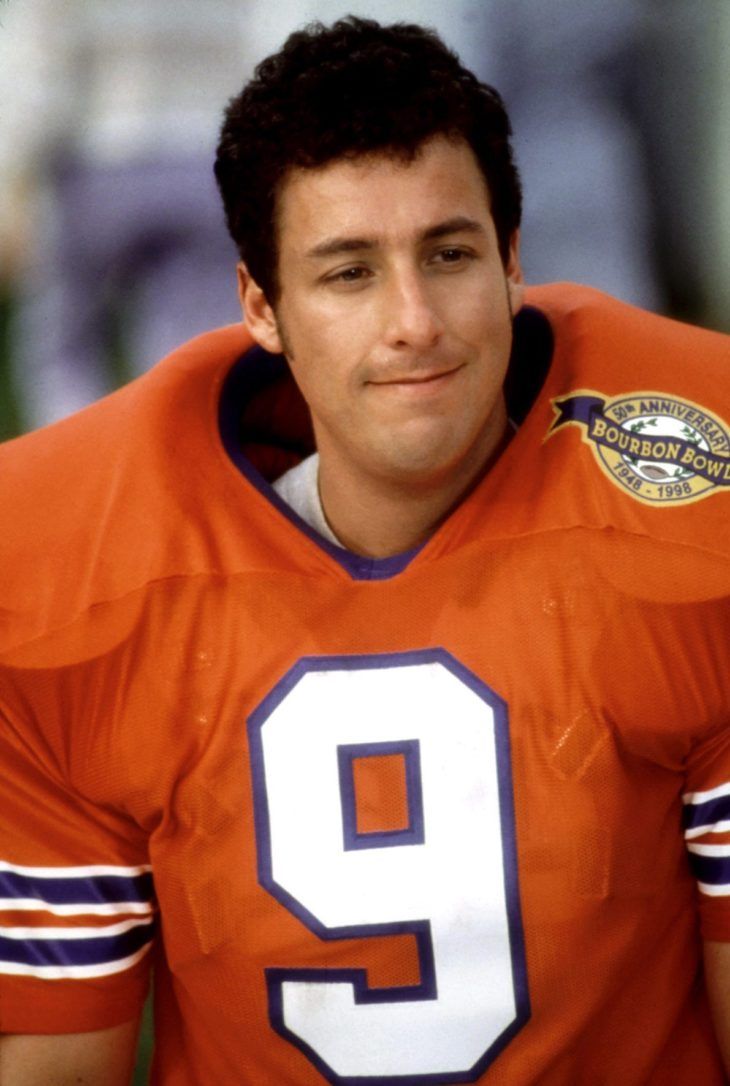 Varsity Blues is not only an iconic football film, but also an iconic teen drama. The 1999 sports coming-of-age drama follows the ups and downs of a high school football team who have to deal with the pressure of their coach and their town, while also navigating the ups and downs of life inside and outside of high school. The movie features quite the cast including James Van Der Beek, Jon Vought, Paul Walker, Amy Smart, Scott Caan, Ali Larter and more. 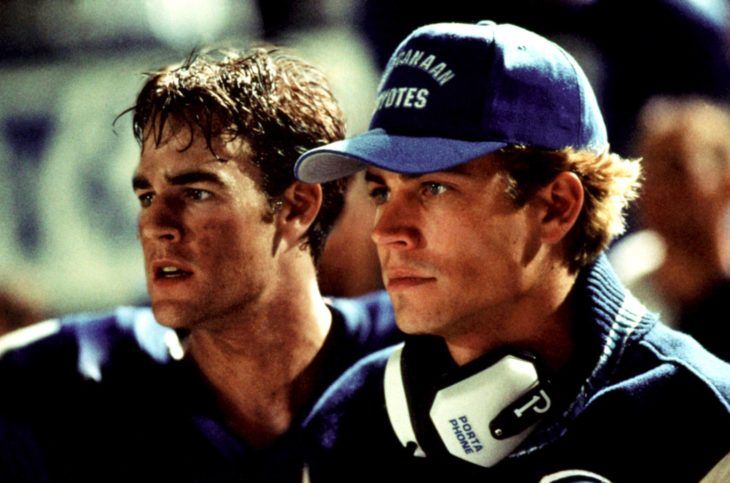 The Longest Yard is one of those sports films that has had a couple of iterations. The original film was released in 1974 and starred Burt Reynolds as a disgraced football quarterback who brings glory to prison football. In 2005 the film was remade with Adam Sandler in the lead as Paul Crewe who is sentenced to 18 months in jail. While many appreciate the humor of the remake, most preferred the original with one critic writing, “This Yard has some laughs but missing from this remake is the edginess of the original.” 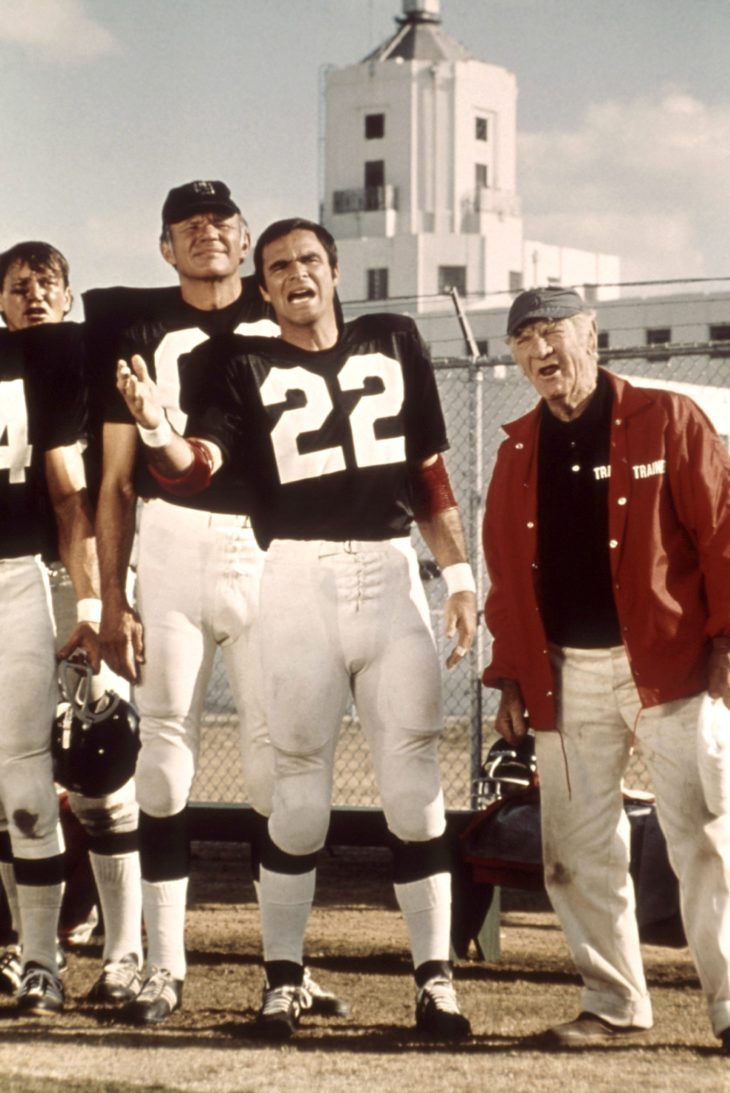 2009’s The Blind Side is the biographical drama based on the life of offensive lineman Michael Oher in his journey from a rough childhood to the NFL. Thanks to Sandra Bullock in the lead role of Leigh Anne Tuohy, the film was one of the few sports film to grip audiences of all demographics and earned Bullock both the Golden Globe and the Academy Award for Best Actress. Despite the praise from many, the film wasn’t without its critics, however it remains one of the best known football-based films out there. 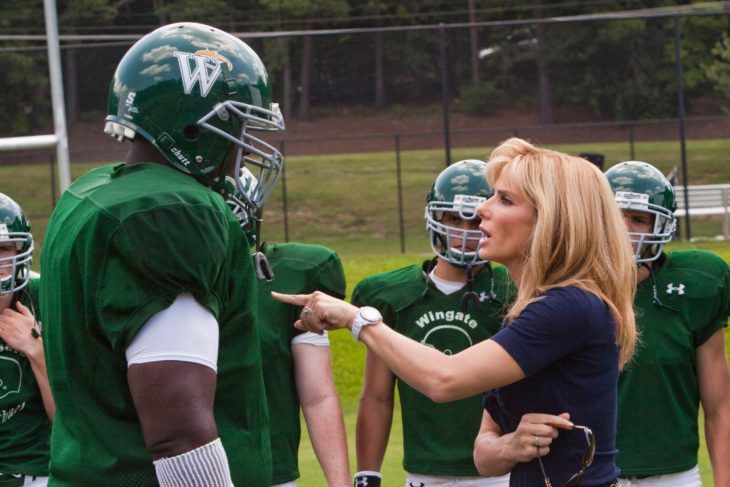 This film has been made a couple of times as TV movies. The original, 1971 film starred James Caan and Billy Dee Williams as Chicago Bears legends, Brian Piccolo and Gale Sayers. The film resonates due to its historical significance, and it’s chronicling of a friendship that developed on the football field and ushered one man to an early grave, and the other to the Pro Football Hall of Fame. When Gale Sayers accepted the George S. Halas Award in 1970, an award that is offered to the league’s most courageous player, Sayers humbly stated they were giving the award to the wrong player, then turned his attention to best friend, Brian Piccolo. Brian’s Song is a timeless, biopic classic, set in the world of pro football. 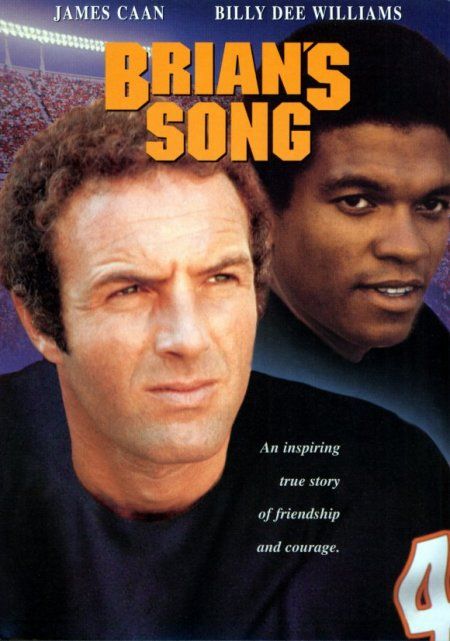 Sure, Jerry Maguire was about the man Jerry Maguire, but the fabric of Jerry Maguire’s universe was sports, and the sport featured in this mix: NFL Football. Cameron Crowe did a knockout job with Jerry Maguire, creating iconic moments and lines that will forever be spouted when it’s time to get paid: “Show me the money!” Diving below the business of football, Crowe focused on the creation of legacy, and applied it to the characters of Jerry Maguire and Rod Tidwell. They were two guys with big hearts, a desire for legacy and each facing a crossroad. Add to the mix a funny little kid named Ray, some stellar football action and one of the most romantic scenes in film history, and you’ve got a winner. Jerry Maguire is a stellar reminder of the pro football world of the mid-1990s. 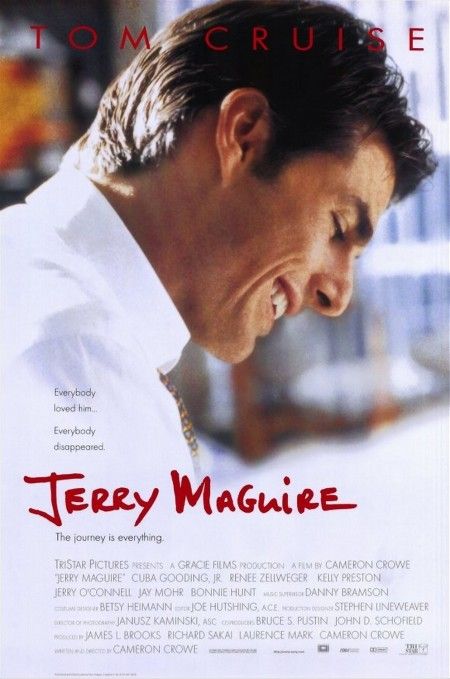 The Best of Times was not well-reviewed. It was not perfectly executed and it was not in any way a cultural phenomenon, but it is a delightful romp with Kurt Russell and Robin Williams. It is, at its essence, the film that evokes the desire to have one last moment of glory on the football field — to potentially right all of wrongs, and wipe away past regrets. Robin Williams plays Jack Dundee, a hapless car salesman who dropped a pass from all-world quarterback, Reno Hightower (Russell) in high school. The film asks that age-old question: What if? Through comedic manipulation, Jack puts together a football game between old high school rivals, and hilarity ensues. A comedy of errors, The Best of Times is highlighted by Kurt Russell being at his absolute best. 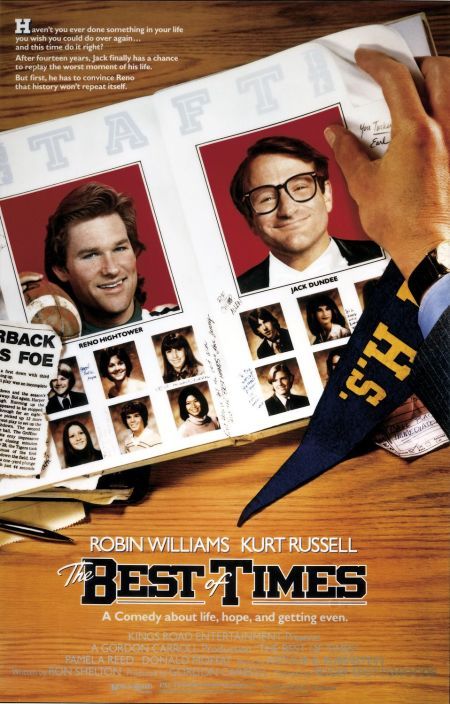 The story of Invincible — the biopic of Vince Papale, played by Mark Wahlberg — could be higher on this list, but Disney tried to gloss it up more than was necessary. This time period — mid-1970s — was lacking the refinement displayed in the Hollywood version, and it failed to capture the era. It looked like people in the 21st century playing like it was the 1970s. Still, the true story is undeniable, and Mark Wahlberg was an excellent choice to portray Papale — he’s an actor willing to take a beating. The football action in the film was quite enjoyable, especially the pickup games, when the hardcore neighborhood guys would play pick-up, tackle ball with no pads. And Greg Kinnear as Dick Vermeil…? It worked well. 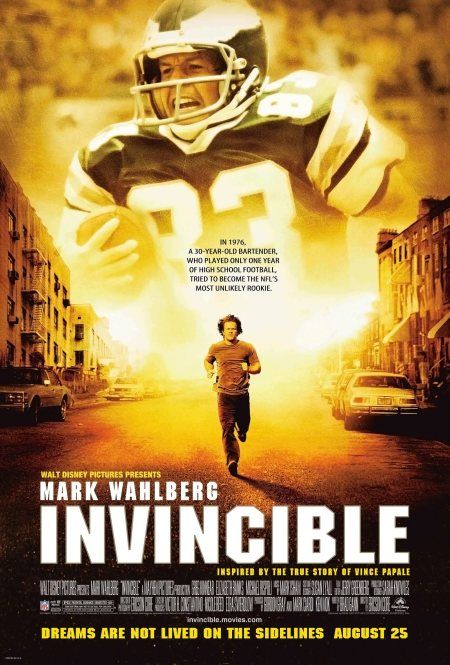 When many think football movies, they immediately think 1999’s Any Given Sunday which is the origin of one of the greatest inspirational speeches in film history. The star-studded cast includes Al Pacino, Dennis Quaid, Cameron Diaz, Jamie Foxx, LL Cool J, and so many more, who all delivered one of the best sports films of all time. The film follows the once great Miami Sharks team that is now struggling with their aging players and dives into the struggles faced both personally and professional by football players on any given Sunday. 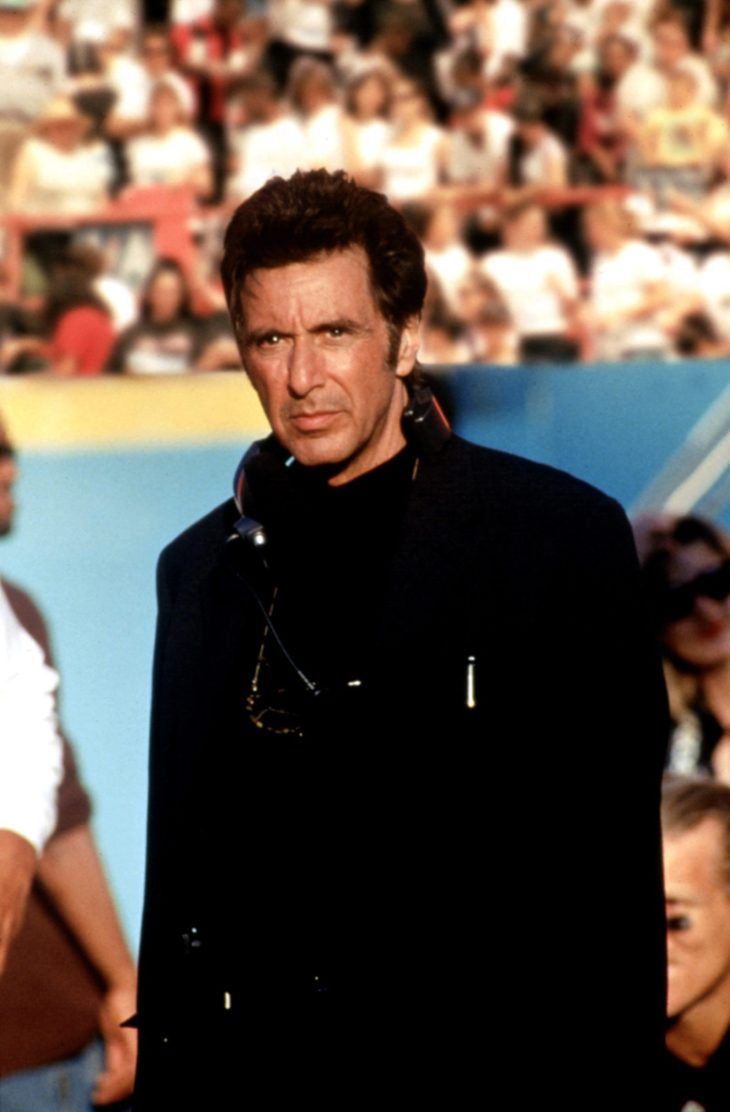 7. All The Right Moves

Digging into the glory of the gridiron, few movies featured the blood and guts of high school football better than All The Right Moves. Another gem starring Tom Cruise, long before Tom was a superstar, All The Right Moves highlights the relationship between players and coaches, and that fine line of motivation and abuse. The stakes are upped when Stefen Djordjevic (Cruise) needs football for a scholarship, in order to escape his go-nowhere town. The hard-nosed football coach in this oft-forgotten gem is none other than Coach himself, Craig T. Nelson. Add to the mix of some fun, muddy football, expertly played teenage angst by Tom Cruise and his on-screen sweetheart, Lea Thompson, and this film is gold, regardless of its flaws. 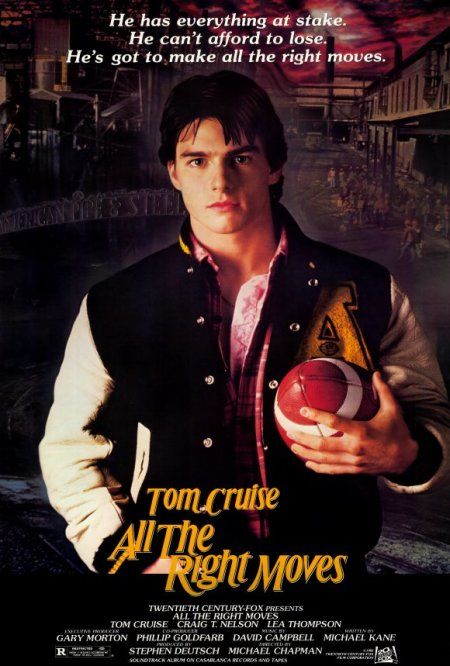 Staying in the high school arena, Friday Night Lights wasn’t merely a film about football, it was a film about a Texas religion. Yes, 95 percent of residents will holler “Praise Jesus” on Sundays, but Monday through Saturday, the small towns in Texas eat, breathe, talk and live football. Perfectly titled, Friday Night Lights relied on an underused, cinema verite style that was influential in changing how films and television shows of the contemporary era have been photographed. In addition to being an excellent, stand-alone film, the feature version led to the development of one of the most beloved television shows of all-time (the show was saved multiple times by fans and various networks), bearing the same name. 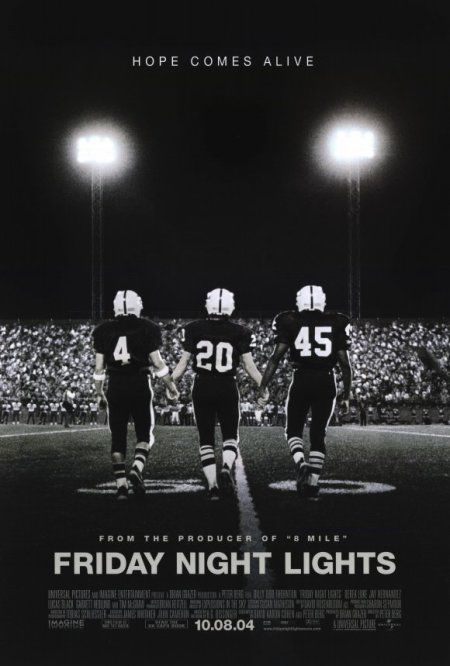 2003’s Radio is one of the most heart-wrenching sports films out there. Cuba Gooding Jr. stars in the film as James Robert “Radio” Kennedy who is a young mentally handicapped man that is known in his town for roaming the streets listening to his radio and pushing a shopping cart. After an incident finds Radio bullied by the football team, the team’s coach Harold Jones decides to take Radio under his wing. While football surrounds his story, the heart and soul of the film lies in Radio and Cuba Gooding Jr.’s fantastic performance. 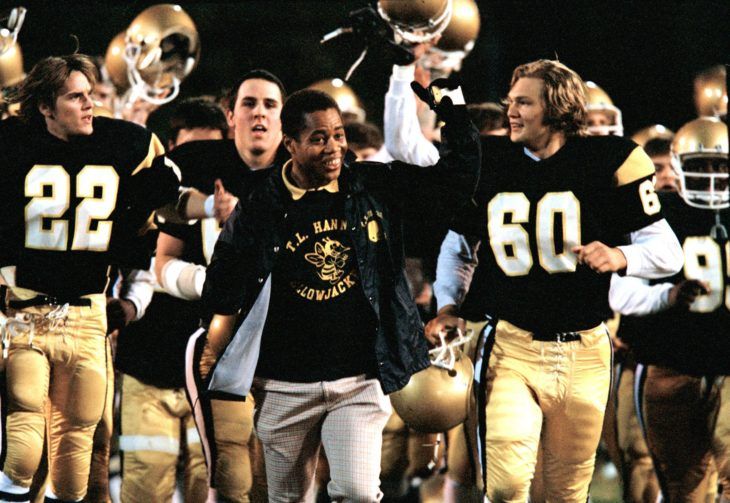 Born of definitive tragedy, We Are Marshall is a true legacy film that has left an indelible mark on American history. In November of 1970, nearly every player and coach from the Marshall University football team died in a plane crash not far from their landing destination. In an effort to rebuild a beloved program, the university hired Jack Lengyel to work a miracle. For film fans, it was only appropriate that Matthew McConaughey play the role of Lengyel. Ultimately, he developed a wonderful on-screen rapport with Matthew Fox, who played Assistant Coach Red Dawson, and pulled the story up by its bootstraps in the same way Lengyel did with the program. The film falls short in the realm of direction, but this story is too strong to be denied. 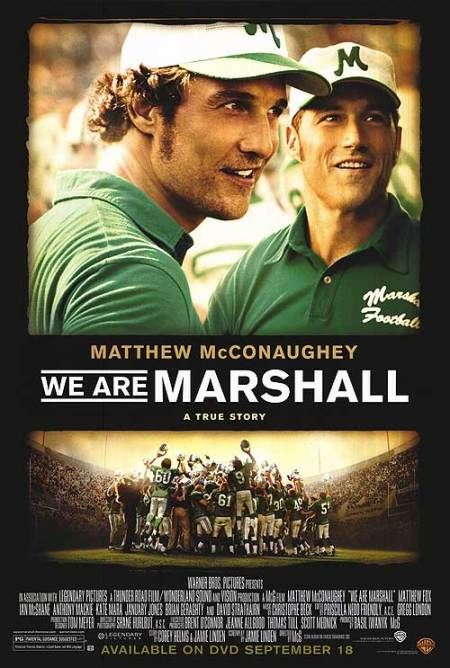 For many football fans, it really doesn’t get much better than The Replacements. The 2000 film stars Keanu Reeves as Shane Falco, a former All-American quarterback who is best known for choking during his team’s trip to the Sugar Bowl. In the film owners scramble to put together a misfit group of players to keep the professional football season alive after a players strike takes out the biggest names in the game. With a cast lineup also including Gene Hackman, Jon Favreau, Rhys Ifans and more, The Replacements is all at once hilarious, intriguing, exciting and a great homage to the sport of football and those who play the sport of their love for the game — not the money. 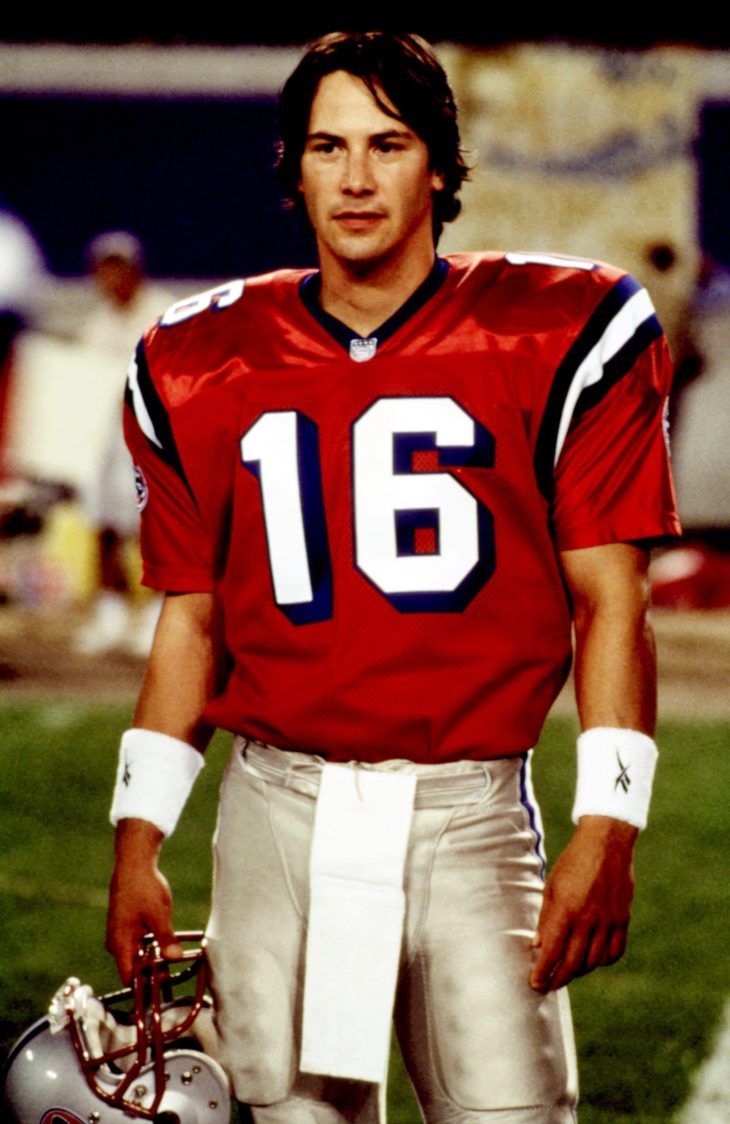 Rudy is the true story of Dan Ruettiger, who was as slight as the film portrays, and who genuinely loved Notre Dame Football as much as the film portrays. It is a testament to the true spirit of football in its purest form. Dan Ruettiger possessed a love of the game that was so deep, he was somehow able to settle into the mix of one of the nation’s most elite collegiate programs at 5’6″ and 165 pounds. Sean Astin offered a stellar performance as the never-say-die Rudy. A little trivia: The film served to introduce actors Jon Favreau and Vince Vaughn who were both in the mix at South Bend, Indiana. The filmmakers deserve a kudos for somehow capturing game day footage of ND Stadium in the 1990s and making it work well as 1976. It is the perfect movie to watch before the college season kicks off. 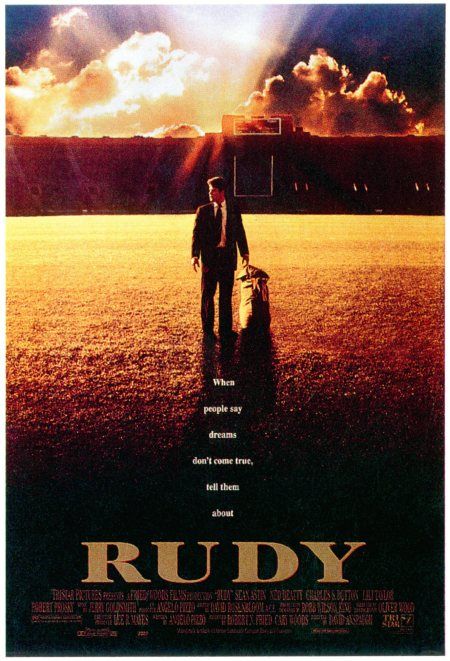 Regardless of using football as a teaching tool about race relations during the United States Civil Rights movement, Remember The Titans had more to say about living life than it did about the X’s and O’s of football. Apply those life values to the football field, and you get the Titans. Without a doubt, the moral messages are drizzled with a sweet syrup and sprinkled with saccharine, but getting down to brass tacks the universal truths put on display were inspiring. Some of the football stunts are played as presentation to the camera, and it’s a bit annoying to the truest of football fans and former players, but the overall action was very reminiscent of the high school game during any era. Remember The Titans will have no issue standing the test of time. 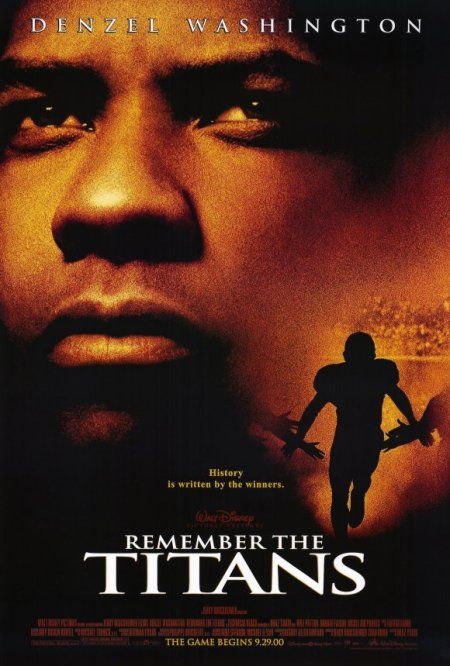