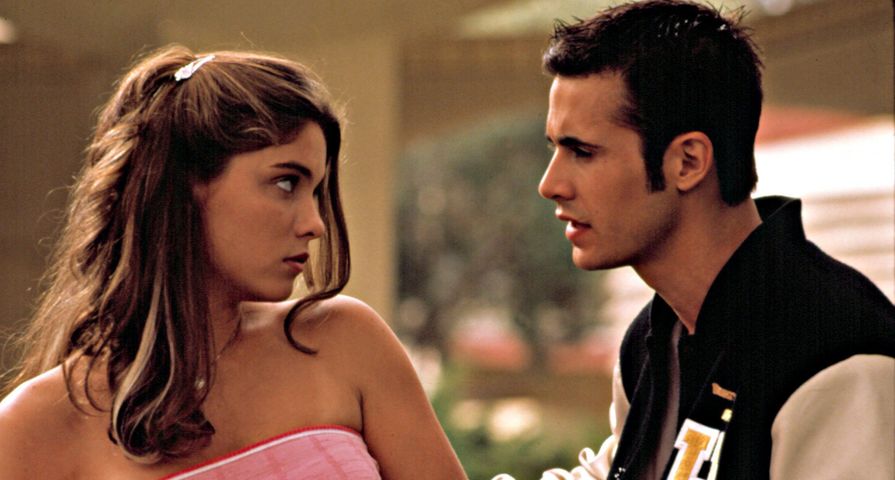 From Dirty Dancing to Footloose and newer films like Step Up and Take the Lead, dance films know how to get fans feeling like they are ready to hit the dancefloor themselves. Since audiences know what they are in for when it comes to dance movies, dance sequences become even more fun when no one is expecting it in other films! A lot of non-dance films have incorporated some pretty stellar dancing scenes that probably didn’t really have a place in the movie and just seemed very weird, but there have been some that have definitely livened things up a bit. Here are some of the most iconic yet unexpected dance scenes in non-dance movies:

2003’s Grind was the furthest thing from a dance film. Starring Mike Vogel, Adam Brody, Joey Kern and Vince Vieleuf, the movie focused on four friends who chase a pro skateboarding tour around America in hopes of being noticed for their skateboarding skills. In the midst of all the skateboarding and hilarious antics, the guys wind up in a club event for all the pro skateboarders and break out in an absolutely hilarious choreographed dance to Young MC’s “Bust a Move.” In the commentary the stars later admitted that Vince had actually missed all of the dance scene prep and if watched closely it is easy to tell he is just trying to follow the other guys. While it certainly wasn’t expected, it was an extremely entertaining addition to the movie.

The 40-Year-Old Virgin is one of the most iconic comedies of the 2000s and while it was certainly wild and random, it didn’t get more random than the film’s unexpected dance scene. After Steve Carrell’s Andy finally loses his virginity to the love of his life Trish, she asks, “So, how was that for you?” In response, Andy begins singing the opening to the iconic Hair medley of “Age of Aquarius/Let the Sunshine In” which turns into a choreographed dance scene in the middle of a field with a shirtless Paul Rudd and Seth Rogen. With stars like Carrell, Rudd and Rogen as the leads of a Judd Apatow film, there is never any telling what hilarious thing they are going to next so, while the dance scene was surprising, you can never count anything out of an Apatow movie.

1988’s Beetlejuice was off-the-wall in the most brilliant and entertaining of ways, and although it was unique and unpredictable, it didn’t make the dinner party dance scene any less surprising. The movie had a couple musical moments, but Delia’s dinner party was absolutely hilarious as her similarly snobby guests tried to discuss whether or not her house really was haunted. Of course, as she tried to change the subject, Delia begins inexplicably belting out Harry Belafonte’s “Day-O (The Banana Boat Song).” Eventually it turns into a complete group possession of the dinner guests as they all wave their arms, shake their bottoms and lose control of their bodies as they sing and dance to the song.

13 Going on 30 starring Jennifer Garner and Mark Ruffalo is one of the most memorable romantic comedies of the 2000s, if not only for its fantastic dance scene. There is no doubt that it was Garner’s charm that kept the movie going and made the dance scene for Poise’s party one of the most entertaining and light-hearted moments of the film. After Poise Magazine’s party seems to be a flop and her editor is in distress over the awful party, Jenna (Garner) livens things up by requesting Michael Jackson’s “Thriller” and coaxing her friend Matty (Ruffalo) into performing the iconic “Thriller” dance with her which incites an entire “Thriller” dance party. Looking back, the dance was foreshadowed earlier in the movie, but that didn’t make it any less amazing, even if it was a little out of place.

Although many would expect Ferris Bueller to lay low while trying to avoid getting caught playing hooky from school, he actually did the exact opposite. It sure was shocking when he joined the huge parade going through town, but even more so when he stole the show by lip syncing and creating an entire dance party down the streets with “Twist and Shout.”

By now we all know what happens when you put a jock, a nerd, a princess, a burnout, and a recluse together…a dance party! 1985’s iconic film The Breakfast Club was about anything but dancing as the coming-of-age film explored the stereotypes formed in high school and what happens when teenagers are allowed to step out of their cliques if even for a morning of detention, but that didn’t stop John Hughes from taking his love of music in films even further with a dance scene. The dance medley to “We Are Not Alone” by Karla DeVito was random, but now is just as iconic as the film itself as the odd group let loose and danced out their teenage angst which was complete with air guitar and choreographed moves.

An impromptu dance routine can happen in any movie really, but when it is already quirky, that is when things get the most interesting. 500 Days of Summer‘s adorable love story gave a whole new meaning of getting a “spring in your step” after spending the night with someone you love when Joseph Gordon-Levitt’s Tom Hansen breaks out into a dance routine to “You Make My Dreams Come True” by Hall and Oates while walking to work. No one expected the dance scene let alone how elaborate it was going to be with a marching band, cartoon birds and backup dancers performing a perfectly choreographed routine.

The ’90s and early 2000s were truly the golden time for teen romantic comedies and for some inexplicable reason a few of them had random, but fantastic, dance scenes. 2000’s Boys and Girls starring Freddie Prinze Jr., Claire Forlani, and Jason Biggs included without a doubt one of the most amazing yet completely surprising choreographed dance scenes of them all. Although Ryan (Freddie Prinze Jr.) and Jennifer (Claire Forlani) are just friends, she drags him to a club where they engage in a dance to Apollo 440’s “Stop the Rock” that somehow everyone knows the moves to! The film is definitely one of the most underrated of Freddie Prinze Jr.’s, but everyone should enjoy his awkward dancing while everyone else completely nails it.

2. What A Girl Wants

In the prime of Amanda Bynes’ career she had many starring roles including in 2003’s What A Girl Wants alongside Colin Firth and Oliver Hudson. The endearing film was entertaining for many reasons, but the random dance scene during a coming out party was absolutely priceless. In an effort to liven the party up, Hudson’s character Ian Wallace sings James Brown’s “Get Up Offa That Thing” while Bynes’ Daphne Reynolds gets the party started with some dancing. After a lot of awkward moves from some people, things get really hilarious when Reynolds whistles and all of a sudden everyone breaks into the same dance routine. The scene may be ridiculous and cheesy but is also completely iconic of teen films at the time, and is one of the best dance scenes in non-dance movies that teenagers at the time will always remember. Unfortunately there aren’t many great clips of the scene, but click here if you want to see it. 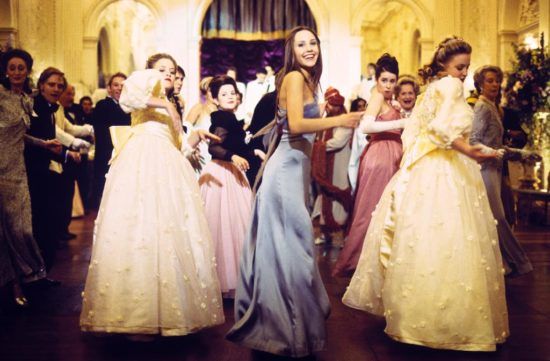 It may be that Freddie Prinze Jr. truly likes to dance and didn’t want to admit it as another one of his iconic teen films finds itself on this list with 1999’s She’s All That. The prom dance scene near the end of the film is where all of the seniors show off their dance moves that they supposedly learned from Usher, who plays the school’s D.J. The seniors perform a complete dance  to Fatboy Slim’s “Funk Show Brother,” and the fact all of the students know the same dance and execute it perfectly is absolutely ridiculous and really comes out of nowhere in the movie but none the less is truly amazing. Not to mention the scene undoubtedly inspired the line in Not Another Teen Movie where Josh Radnor’s character says, “Funny isn’t it. You would never suspect that everyone at this school is a professional dancer.” Needless to say ’90s and early 2000s films gave teens unrealistic expectations of people randomly breaking out into a choreographed song and dance routine.