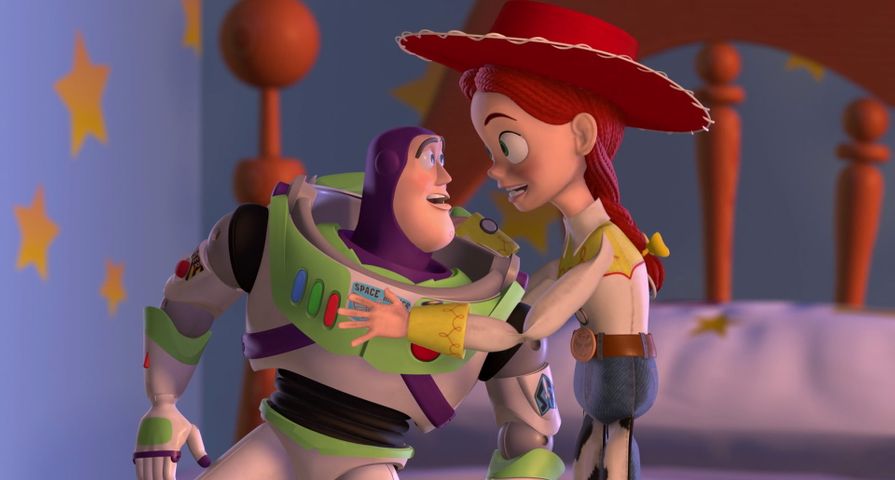 As children, we all loved watching cartoons. For us, they were just colorful and lovable shows with interesting characters. However, have you ever gone back to re-watch these shows as an adult? If so, you have likely realized you missed some pretty racy stuff in your favorite children’s shows. And were not just talking about lines that could be misinterpreted as “adult.” We’re talking about jokes and situations deliberately aimed at the parents (and maybe older siblings) watching these shows. You have to wonder how these slipped through. Without any further ado, let’s take a trip down memory lane and check out 15 adult jokes that were cleverly hidden in children’s movies and TV shows.

15. Interesting Clip From The Road to El Dorado

In 2000, Dreamworks released an animated film called The Road to El Dorado. This film featured two con artists who get stranded on an island, and mistakenly get treated like royalty by the inhabitants. While it didn’t do incredibly well at the box office, it did have one very memorable scene — at least for the adults in attendance. During a scene in which two characters are making out, some suggestive animation happens.

When the pair are startled up, the female character pops her head up first, only to have the male character pop up a second later. As it turns out, their heads were far apart, insinuating that they might not have been merely kissing. The GIF for this scene has become a bit internet famous and it’s an adult joke we definitely missed the first time we saw this film.

Justice League was a popular cartoon about the superheroes in the DC Animated Universe. It ran for a couple seasons on the Cartoon Network and children loved it. However, there were also some moments in the show that were directed at an older audience. One such moment was a conversation between The Flash and Hawk Girl.

After Flash calls himself the “fastest man alive,” Hawk Girl makes a joke saying “which might explain why you can’t get a date.” While the joke likely went right over the head of youngsters, viewers of a certain age immediately felt bad for the Flash’s, *ahem*, problems with finishing too quickly.

13. The Little Accident in The Powerpuff Girls

The Powerpuff Girls was an incredibly popular show from the late 90s and into the early 2000s. It was about a group of three little girls trying to balance being normal with their crime fighting duties. They were created in a laboratory after an accident by Professor Utonium.

When they meet a new neighbor girl named Robin, they show her around their place, talking about how they were created by accident in a lab. While this seems innocent enough, it ends with Robin saying “don’t worry, I was an accident too.” The kids watching wouldn’t get this accidental pregnancy joke, but parents definitely did a head turn when they heard that line.

12. Buzz Lightyear Gets Excited Over Jessie

Toy Story is one of the most popular and beloved movies of all time. Millions of people watched it (and its sequels) and you’d be hard pressed to find someone who doesn’t recognize or know the names of the characters of Woody or Buzz. However, even a film as innocent as Toy Story had an “adult” scene that likely flew right over your head as a child. When Buzz Lightyear sees Jessie for the first time, his wings fly out. To a child this was innocent, but adults likely understood the joke in a different context. BOING!

This is one of only a few examples on this list that isn’t animated. Despite that, there is no doubting that the Scooby-Doo movie was largely for children. During a scene on a plane, Shaggy meets a woman and hits it off over their strange love of Scooby Snacks. When he asks her name, she responds with “Mary Jane.”

Shaggy quickly responds saying that Mary Jane is his favourite name. Of course, with Shaggy having many qualities of a typical stoner (laziness, always has the munchies), it is no surprise his favourite female name is also a nickname for marijuana.

10. Dusting for Fingerprints in Animaniacs

Animaniacs was a show that had a few examples that could have appeared on this list. The show ran for 99 episodes throughout the 1990s. It was a childhood staple for many children, so it was surprising when there were so many somewhat-dirty jokes that slipped past the censors.

One of the biggest jokes was one involving the late pop music icon Prince. One character asks another to dust for prints, and hilariously enough they find the actual Prince. Of course, they say “no, no, no… finger prints!” Dot’s response of  “I don’t think so” was both hilarious and pretty racy for a children’s show!

Unlike most of the adult jokes on this list, this one doesn’t contain any sort of sexual innuendo. In this episode of Hey Arnold, Arnold finds out that his grandpa never finished grade school — which he is pretty embarrassed about. This information comes about after grandpa is unable to help Arnold with his homework.

When Arnold suggests he has enough brain cells to go back to school, his grandpa disagrees. “Not since Woodstock” says grandpa, which insinuates he enjoyed his fair share of hard partying with drugs and/or alcohol in the past. This is a little throw back to the Flower Power 60s, filled with sex, drugs, and rock and roll. But the kids watching Hey Arnold wouldn’t have gotten it.

Spongebob has always been one of those shows enjoyed by everyone — from small kids to full grown adults. It has its childish charm, but also some scenes that would appeal more to adults and their humor. One of those scenes came in which Spongebob Squarepants was watching a little something on his TV. But it isn’t the nightly news or a soap opera, based on his reaction. After Spongebob sees Gary (his pet snail) come up beside him, he quickly changes to the sports channel in embarrassment, to prevent Gary from seeing what he was really watching. The suggestion is that he was watching an under-the-sea version of Cinemax, known for their softcore adult movies that aired late at night.

7. The “Horoscope” Line From Full House

When it comes to classic shows beloved by children, teens, and adults, Full House has to be at (or near) the top of the list. The popular sitcom ran for eight seasons and nearly 200 episodes (and even spawned a Netflix sequel two decades later, called Fuller House). It turned many of its cast into major stars and was among the most popular shows on TV during the late 1980s to mid-1990s.

However, even a show of that magnitude wasn’t immune to adult jokes here and there. One of the biggest is when Stephanie utters the burn “a horoscope? what’s that Kimmie? A telescope that can only see your face?” towards annoying neighbor Kimmie Gibler. While the writers probably meant it as “horror-scope,” there’s no denying that it sounds much more vulgar than that to most people, many who heard it as “whore-scope.” It was hidden well enough that it slid past the censors and no one got too upset about it.

One of my single favourite TV shows as a child was Dexter’s Laboratory. It was a great show and ran for nearly 100 episodes. It was mainly about boy-genius Dexter, his battles against his neighbor, and his constant fight to keep his sister out of his secret lab. And judging by its spot on this list, yes, even a show about a boy genius featured a joke that could be seen as adult. When Dexter tries to hire a lab assistant, he finds a tall and attractive blonde woman wearing a skimpy dress. At one point, Dexter asked her to dance around, in which she quickly responded with “okay, but it’s 50 buck extra.” Wait, what kind of job was this for again?

5. Rocko’s Modern Life and the Milk-O-Matic

Rocko’s Modern Life was a very interesting show. It had the look of a children’s cartoon, but it was also very controversial as it was chalked full of very adult humor and situations. Many parents were outraged when they learned the truth about what their kids were watching. We could have filled this entire article with scenes and jokes from this show, but we decided to just keep it to one.

The off-color joke we decided to include is one centered on the Milk-O-Matic. In this scene, Heffer took the place of a cow and was hooked up to the Milk-O-Matic, which was an automated machine to milk cows. It is very clear that Heffer is “enjoying” this experience a little too much, and the show does nothing to hide it. This would’ve been a pretty jarring scene for a child to watch.

4. Patrick’s “Genius” Is Showing in Spongebob

Because Spongebob Squarepants is so popular and widespread, we decided to add another joke that might have gone over your head. The scene occurs when Patrick and Spongebob are having a conversation. Patrick has a good idea and Spongebob says, “Patrick, your genius is showing!” Obviously not hearing correctly, and thinking he said another word that rhymes with “genius,” Patrick quickly covers his crotch area and asks “Where?” No, Patrick, that’s not what he meant.

Looney Tunes has been around for decades and has spawned some of the most important cartoon characters of all time in Bugs Bunny. The show produced hundreds of skits, and many of our favorite cartoon characters originated from the classic Warner Bros. series. Throughout their many episodes, there were bound to be some adult jokes thrown in there.

One in particular that stands out is when Yosemite Sam goes to prison thanks to a feud with Bugs Bunny. The animators show then showed the following scene, where Sam sees his large, effeminate cell mate batting his eyelashes towards him. Judging by Sam’s reaction, he’s not too excited about the prospect of a little jailhouse romance. Yeah, Looney Tunes essentially included a scene joking about prison rape. Not cool.

Of all the classic children shows out there, few were as good as Rugrats. The Nickelodeon show ran for an outstanding nine seasons and had nearly 200 different episodes. The characters and themes of the show were outstanding. As you can likely conclude its spot on this list, there were some jokes for the adults thrown in as well.

One questionable gag in particular is when grandpa is taking care of the kids and rents them a few movies. Of course, he wasn’t that interested in the Reptar franchise, so he rented one for himself for “after the kids went to bed.” His choice was Lonely Space Vixens, which sounds like some kind of sci-fi sexploitation flick. Either that, or it came directly out of the video store’s “back room,” if you get what we’re saying.

Despite already including a joke from the Rugrats show in this article, this one was just too adult not to include. Also it was from The Rugrats Movie, so technically is different. In the scene, a baby says “Man, they cut my cord.” Another baby looks in his pants and says “consider yourself lucky,” which is clearly insinuating that the baby has undergone a circumcision. Yeah, this one is pretty uncomfortable to even write about. Just the way they didn’t try to sugar coat this scene at all  — in a film marketed only towards children — was quite shocking. They probably should have left this scene on the cutting room floor during editing.