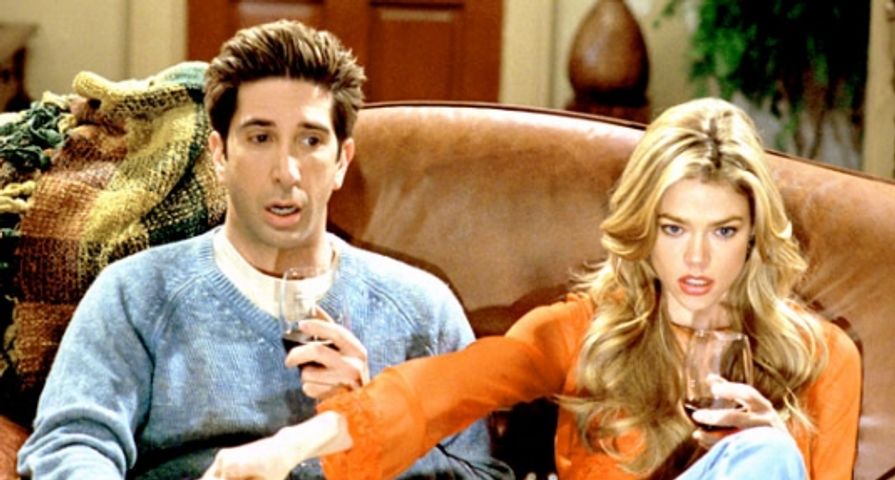 Even the best of shows can have its weak moments and Friends was no exception. Despite its years-long run and undeniably being one of the most popular rom-coms ever, there were occasionally storylines, characters, and episodes that we all really could have done without. Whether they came across as time-fillers, missteps, or just blatant wrong moves, here are 8 of Friends worst story lines. But, of course, not everyone agrees. Check out the list and see if you think these are the worst, not terrible at all, or pale in comparison to some of the other weirdo and wonky story lines that we could have done without.

8. Older Chandler and the Younger Interns

When Chandler decides it’s time to finally ditch the job he really couldn’t care less about and has taken him away from New York, it’s time for him to start fresh with his career and that means starting from the bottom. He takes a position as an intern and shows up to find out that everyone else – expect for the boss – is much, much younger than him. It’s a story line that’s good for a few laughs, but honestly, it’s a story line that’s been done again and again…and again. With Chandler at a point of all new career beginnings, there was a lot of potential to take his story line anywhere they wanted instead of choosing the same ol,’ same old.

Dermot Mulroney must have had some spare time in his schedule when he appeared on Friends as Gavin Mitchell. Too bad he was written in as a creepy jerk. Popping up briefly and unremarkably in season 9 when Rachel heads back to work after her maternity leave, he annoyed her endlessly and threatened to take her job. So of course she found herself having a slight crush on him. *pukey puke puke* Although he played the annoying arse until almost the very end of his Friends appearance, his character felt like a simple time-filler and nothing more than a reason for a bump on the road to happily-ever-after for two of the show’s main characters when Ross, from his apartment across the street, spots Rachel sharing a kiss with Gavin out on the balcony.

Joey took on more than a few questionable parts on his way to acting fame (think back to his romantic play that ended with a spaceship taking him away, his Freud musical, and his brain-transplant soap opera character Dr. Drake Ramoray), but his part on Mac and C.H.E.E.S.E. was…cheesy. When Joey nabbed the role of a Detective working alongside a crime-fighting robot named C.H.E.E.S.E. (Computerized Humanoid Electronically Enhanced Secret Enforcer) that is the cheesiest looking robot ever, it’s another story line that felt more like a cheese and cracker filler than a taste of the main course.

When Chandler’s job sent him off to Tulsa, there was a lot more the show could have done with the potential plot than just have him super bored in his hotel room, super bored at work, and super boring for viewers to watch. Granted, the whole point was so that Chandler would rebel enough to quit in the end, but when Christmas rolled around and it was another not-so-great episode, there were more yawns than laughs from viewers. The writer may not have found Tulsa as exciting as New York, but surely they could have found a few extra plot points to add some laughs to his dreaded experience.

If you weren’t aware, there were many fans of Friends who didn’t like the addition of Marcel the Monkey … like, at all. The exotic pet that Ross gets himself in the wake of his first divorce, Marcel was a capuchin monkey with a saucy attitude and love for “The Lion Sleeps Tonight,” the little critter ended up leaving Ross for a zoo and then a career in the movies. In fan forums and online chats, they’re still quite vocal about the reasons that the tiny primate never should have made an appearance on the popular rom-com, from animal rights reasons to those who don’t want to support ownership of exotic animals to those who just didn’t like the monkey cast member. Writers of shows might think that all audiences will love a tiny, cute animal addition to the cast, but apparently that’s far from the truth.

2. Ross Wants to Have Sex With His Hot Cousin

Did they really need an episode with hints of incest? No. No, they didn’t. But that’s exactly what fans of the show got when Friends decided to introduce Monica and Ross’s cousin, Cassie. Played by Denise Richards, there was no doubt that Cassie was a hottie and they made quite the point of emphasizing the dry-spell that Ross was going through which apparently had him finding himself attracted to his blood relative. Thinking he’s receiving signals that she’s also interested in crossing the line, he  dives in for a cousinly kiss. Ew. Ew! EW! No. No! NO! It wasn’t the only time Friends played with the incest ickiness. There was the time in a flashback that we learned Ross thought he was kissing Rachel when in fact he had made-out with his sister Monica and Chandler admitting that he used to undress his cousin…why list more, because ugh.

1. The Joey and Rachel Relationship Fiasco

Rachel and Joey, Joey and Rachel. Either you loved them together or you hated them together. And if you weren’t into their attempted relationship, it’s likely that you reeeeeally weren’t into it. A story line that felt like obvious filler and a no-brainer reason for Ross to flip and drama to emerge, fans of the show knew it was never meant to be so therefore there was no point in the entire situation. Beyond that, the friendship chemistry between Joey and Rachel was top-notch, but the romantic chemistry was just not there. If Joey was going to end up with any of the lady “Friends” we all know it should have been Phoebe. You may disagree with the Joey and Rachel thing, but if you disagree with the fact that Joey and Phoebe were an adorable pair, then you’re just plain wrong.